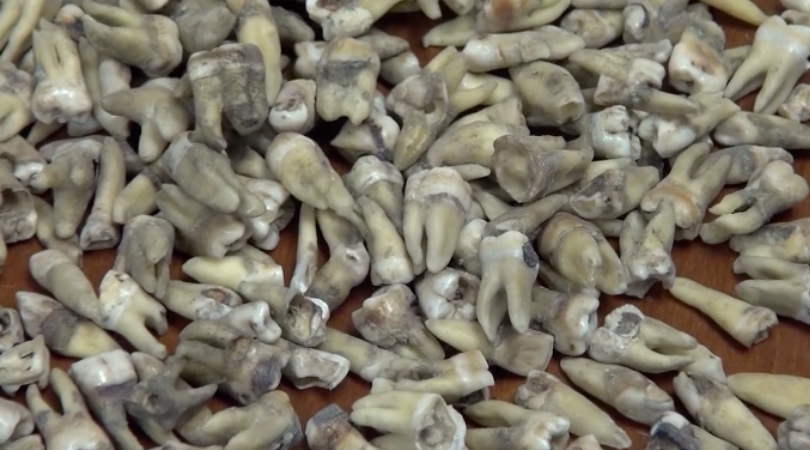 Buckle up kids, because this story is straight of out House of Wax, Texas Chainsaw Massacre, and Haunting of Connecticut all rolled up into one terrifying story. Why? Well, apparently, construction workers in Valdosta, Georgia discovered an estimated 1,000 HUMAN TEETH inside a wall!

Yes, I know, I know. I told you it was straight out of a horror movie! You see, the building is going under renovation, which is why construction workers were tearing down the walls. According to Harry Evans, a researcher for the Lowndes County Historical Society and Museum, the building was once occupied by a dentist named Clarence Whittington in 1900.

The building was then occupied by another dentist until 1930, which if you put two and two together, you might expect to find a few teeth here and there. BUT 1,000 hidden inside a wall for no one to find? That seems a little bit excessive.

Davis added he couldn’t find any direct family of the owners of the building nor the dentists, meaning he can’t really pinpoint what exactly happened. So basically, there is still no clear explanation as to what the heck the teeth were doing inside the building, or why they were stored in the walls in the first place!

To try to find some DNA out of them, the teeth were donated to the Lowndes County Historical Society where they will be tested to find out who they belonged to. But, to make things even creepier (and sick, if I do say so myself), the city is actually embracing the “unusual find” and holding a competition by offering $100 to anyone who can guess exactly how many teeth were found.

Honestly, if I was the one who found those teeth, I’d quit my job right then and there and run out of the building before anyone could say bye. Heck, I’d run to the car and out of the city, because let’s face it….someone is going to come back and get those teeth one day. Whether it’s a human being or an angry spirit.

Nope, not today Mr. Tooth Fairy, I don’t have time for your Voodoo stuff. Take your teeth and get out of here.

Watch: Foods That are Worse for Your Teeth Than Candy