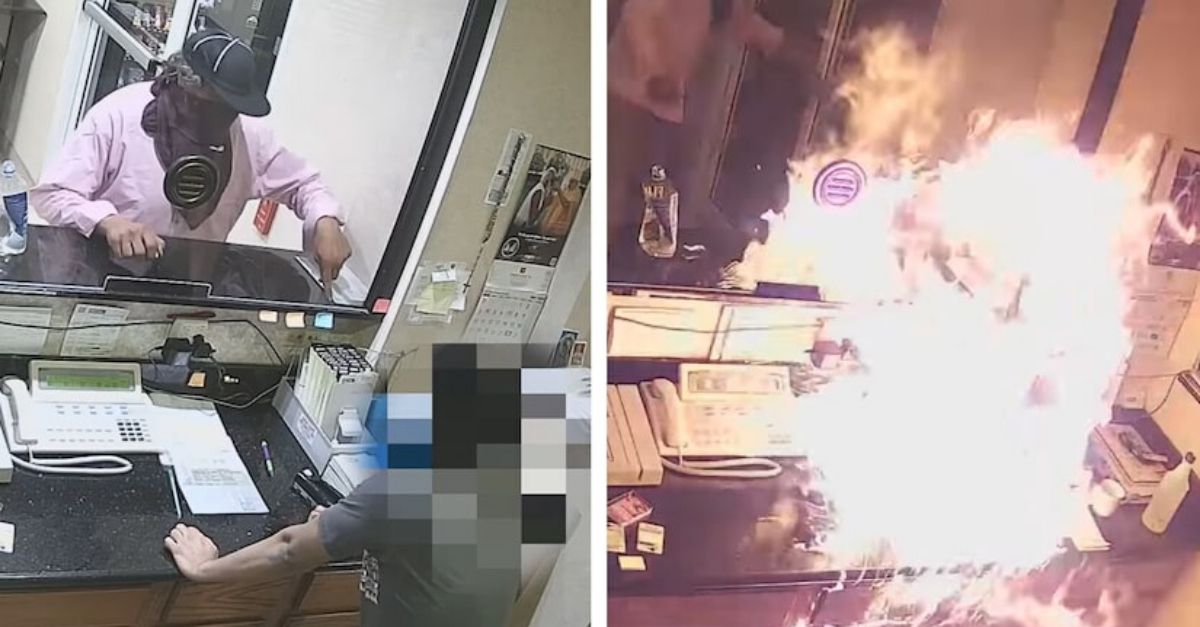 A horrific robbery attempt at a Texas Hotel located in Fort Worth was captured on a security camera, and now authorities are asking the public’s help to identify the criminal. Surveillance video shows the masked robber walking into the Fort Worth Budget Host Inn lobby and threatens to burn the clerk alive, who is behind the counter and glass partition.

That’s when the robber douses the counter in a flammable liquid, spilling it all over the clerk. While holding a lighter above the liquid, the would-be thief shouts in frustration at the hotel clerk. Spooked out of his mind, the clerk then reaches for the phone in an attempt to call for help. Acting on instinct, the robber then ignites the liquid and the counter engulfs in a fireball!

So yes, basically, this man threatened to burn him alive if he didn?t give up the money, and carried through with his threat. Luckily, the hotel worker managed to put out the fire, only suffering minor injuries. As far as the hotel lobby, well that was obviously extensively damaged.

The suspect can then be seen running away from the hotel, as he changes his t-shirt before getting in a car and driving away. The fire investigators are now asking the public for their help in identifying the suspect who is accused of arson. Through a Facebook video, the FWFD Fort Worth Fire Department threatened the would-be thief, stating, ” I would urge the suspect, if you’re watching this broadcast, to turn yourself in ?because we eventually will identify you.”

The horrific event was fully captured on security camera: https://t.co/1AwzulO5Y0

In the video, the suspect, believed to be Hispanic, is shown having long hair, wearing a dark-colored baseball hat, and a pink button-up shirt over a teal t-shirt. The fire department stated he was driving a white four-door car, likely Honda Accord, with a sunroof and rear spoiler.

If you have any information about the incident you are asked to contact Lieutenant James Horgan at 817-929-8735 or you can submit an anonymous tip  Crime Stoppers 817-469-TIPS.

Watch: An Attempt to Kill a Spider by Fire Torches Entire Apartment