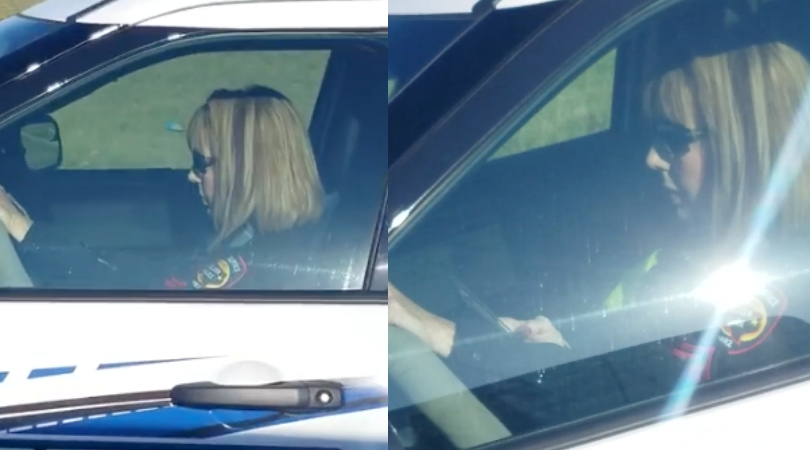 Well, it looks like police officers in Texas are taking a break this year? A concerned Texan decided to record a police officer from Killeen taking a chill day and breaking not one, but two laws. The video shows an officer in a patrol car on her cell phone while not wearing a seatbelt. Yes, the most common reasons why some of us usually get stopped and are forced to pay hundreds of dollars. Shame, shame.

Marcus Evans stated he began to record because he noticed that the officer almost ran a red light. Of course, there were more than a few comments noting how unfair this was because, well, she’s breaking laws that as an officer herself she should enforce. I mean, I don’t think any officer should be exempt from those laws. One, because their life is on the line, and two, it’s the law.

As expected, TxDot did confirm that state laws prohibit all motor vehicle drivers, including police officers, from writing, reading and sending text messages while driving. Under the 2017 statewide law, anyone that is issued a ticket faces a misdemeanor charge and a fine between $25 to $99, although penalties can be as much as $200 for repeated offenders. Anyone convicted of texting and driving whocause serious injury or death to other drivers can face a fine up to $4,000 and up to one year in jail. All drivers and passengers are also required to wear a seat belt at all times.

Liz Mitchell, a spokesperson for TxDOT, did note that there are traffic code exceptions for officers who are speeding but only during pursuits. If this is the situation, officers are generally required to turn on their lights and sirens. As far as the Killeen Police Department, well they have yet to publicly responded to the video itself, but  a spokesperson for the department said that law enforcement officers are aware and the “matter is under review.”

Which I’m sure is just a bluff and they are probably saying that to calm the people down. Still, I really hope the department talks to their officers about this. Police officers aren’t invincible, they can still get hurt if they get distracted by silly things such as cell phones. Plus, you never know who is watching. Nowadays there are eyes everywhere!

Practice what you preach, police officers!

This article was originally published on April 26, 2019.

Watch: 12 Best Breakfasts in Texas You?ve Got to Try or Recreate at Home