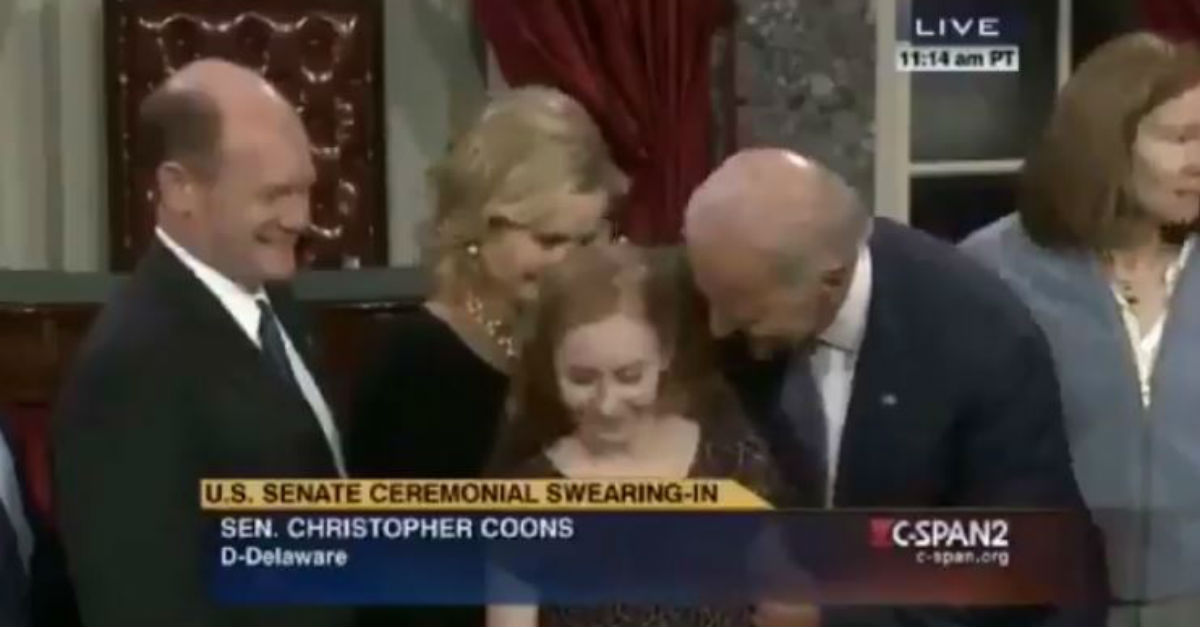 Joe Biden has spent a lot of time in the news over the past week for his remarks about running for president, but a new video of the former VP has thrust him into the media in a much more unpleasant light.

In the clip, which was posted by the right-wing Twitter page “Based Monitored,” Biden is seen schmoozing up to young girls. The videos were taken at the 2015 Congressional swearing-in ceremony, and in the compilation, several of the youngsters look uncomfortable as Biden kisses them on the cheeks and the top of the head.

When does this story explode? pic.twitter.com/NylWhLJcHD

The video has made rounds on far-right circles and bled into the mainstream conservative media sphere, earning a post on the opinion page of LawNewz, a generally middle-of-the-road blog owned by the same company as the popular website Mediaite.

Alt-right superstar and former Breitbart editor Milo Yiannopoulos posted the clip to his Facebook page with the caption “when does this story explode,” which was the same caption that “Based Monitored” used when he posted the video to Twitter.

The wave of sex scandals that began with Harvey Weinstein has also broken the political spectrum with Alabama Senate candidate Roy Moore beating back allegations that he had sexually abused a 14-year-old when he was 32. Those claims have led to some of the Republican party deserting him, especially establishment Republicans like John McCain (R-Ariz.) and Bob Corker (R-Tenn.), who have also been critical of President Trump. In addition, Drudge Report, a site that wields tremendous power in grassroots conservative households, has spent much of the last week covering the stories about Moore–which can’t be good for him.

Biden has made a number of prophetic remarks in the past few days, including telling Oprah, “I regret that I’m not president,” but adding that his decision not to run was “right for the family.” Biden’s son Beau passed away from cancer in May 2015 and, rather than try to get a seat in the Oval Office, he moved to the beaches of Delaware where he spends his time lounging outside the local bookstore with his dog and taking occasional speaking gigs.

But, Biden allegedly hasn’t ruled out a possible presidential run in 2020, though he’ll be in his late seventies by the time the next election comes around. A Friday story from Politico outlined the possible road that Biden might take in the future–right now he’s about to start a tour for his book that details his relationship with his late son. But, the site notes that Biden might be one of the last strong leaders the Democrats have. Obama is out of the game, and Hillary Clinton has failed them. For establishment Democrats, there aren’t too many horses in town, and the best horse might just be named Joe.