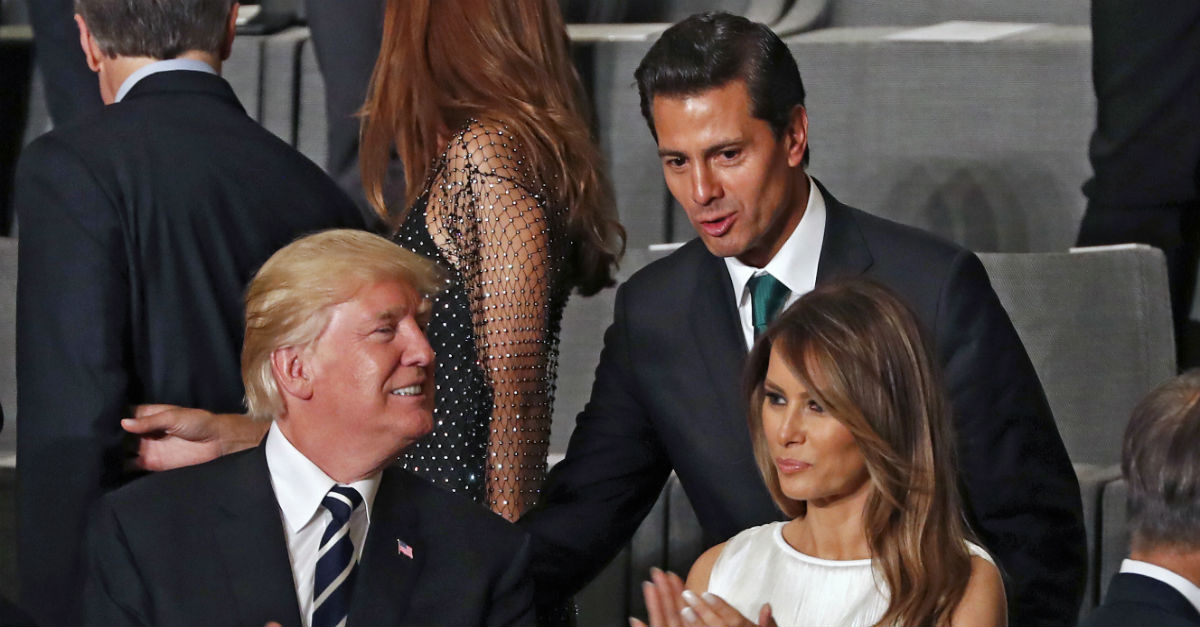 Felipe Trueba - Pool / Getty Images
HAMBURG, GERMANY - JULY 07: Mexican President Enrique Pena Nieto (top) talks to US President Donald Trump (L) and his wife Melania Trump (R) as they attend a concert at the Elbphilharmonie philharmonic concert hall on the first day of the G20 economic summit on July 7, 2017 in Hamburg, Germany. The G20 group of nations are meeting July 7-8 and major topics will include climate change and migration. (Photo by Felipe Trueba - Pool / Getty Images)

Last month, President Trump repeated his statement that Mexico will pay for his proposed border wall as he sat next to Mexican President Enrique Peña Nieto at the G-20 summit. But it would appear that the two leaders do not share the same view about the wall’s funding.

The Washington Post released a transcript of a phone call between Trump and Nieto from January 27, a week after Trump’s inauguration. There, Trump repeatedly asked Nieto to stop telling the press that Mexico was not going to pay for the wall.

RELATED: A press briefing lost all control when Stephen Miller and Jim Acosta argued over the Statue of Liberty

“We cannot say that anymore because if you are going to say that Mexico is not going to pay for the wall, then I do not want to meet with you guys anymore because I cannot live with that,” Trump reportedly told Nieto.

He later expressed worry that the “press is going to go with that and I cannot live with that.”

Nieto suggested that the pair no longer speak about the wall. Saying that he understood “the right of any government to protect its borders as it deems necessary and convenient,” he promised to “continue to be very firm” in saying that his country would not pay.

The full transcript is available here.

Former Mexican President Vicente Fox, who has had his own share of negative exchanges with the president, has also taken several opportunities to inform Trump that Mexico has no interest in paying for an American structure.

It was revealed in January that the initial cost of the expensive border wall would be paid for by the American taxpayer, not the Mexican government. And even as the administration insists that Trump’s funding promise remains unchanged, it would appear that their proposed funding tactics say otherwise.