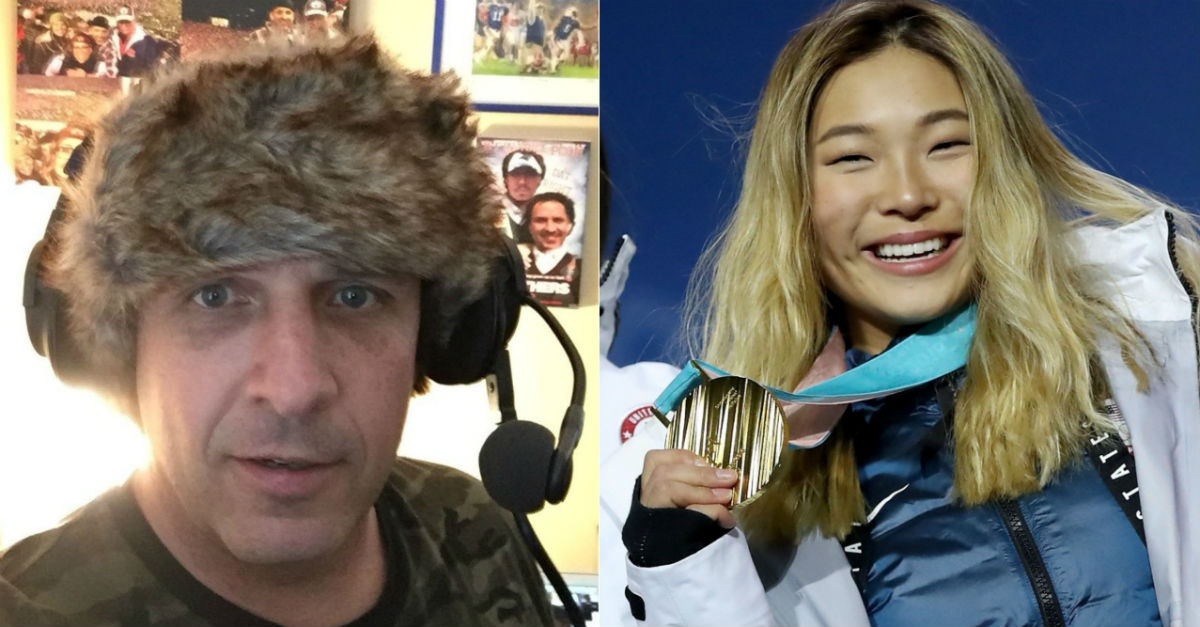 For many athletics enthusiasts, it’s no surprise that the creepiest comment of the 2018 Winter Olympics (so far) came courtesy of Barstool Sports.

Kim, who was described by Sports Illustrated as the “the halfpipe’s Simone Biles,” took home her first gold medal at only 17 years old.

But to Connor, neither Kim’s accomplishments nor her young age meant very much.

Connor told former baseball pitcher and co-host Dallas Braden that he first believed Kim to be a part of the Kardashian crew. The apparent logic for this apparently stemmed from the fact that there is both a Khloe Kardashian and a Kim Kardashian.

But when Connor learned who Kim actually was, he found himself drooling while fantasizing the day she turns 18.

“No doubt, and in fact just to keep it on that tip, her 18th birthday is April 23, and the countdown is on, baby, ’cause I got my Wooderson going. ‘That’s what I like about them high school girls,'” he said, referencing a lecherous character from the movie “Dazed and Confused,” even though comedian Brody Stevens had just referred to her as a “little kid.”

But alas, he kept going, saying, “She’s fine as hell! If she was 18, you wouldn’t be ashamed to say that she’s a little hot piece of ass. And she is. She is adorable. I’m a huge Chloe Kim fan.”

Alongside his Sirius XM gig, Connor hosted a show on KNBR. Thanks to his inability to control his sexual desire for teenagers, Connor soon found that he had fewer things on his plate.

People were quick to share their disgust with Connor.

Fuck you, you perverted, leering, sexist human fecal stain. Fuck you & your pathetic sexualisation of a girl who has accomplished more at 17 than you can EVER dream of. Despite your attempts to reduce a gold medalist MINOR to a ‘hot piece of ass’, she was born out of your league.

I wondered what a grown man who referred to a 17 year old girl as a “little hot piece of ass” looked like.

Too bad you have no respect for women, children, or Olympic athletes.

RELATED: NBC apologizes over Japan comment that angered many Koreans during opening ceremony