After days of speculation, Bill O’Reilly is out 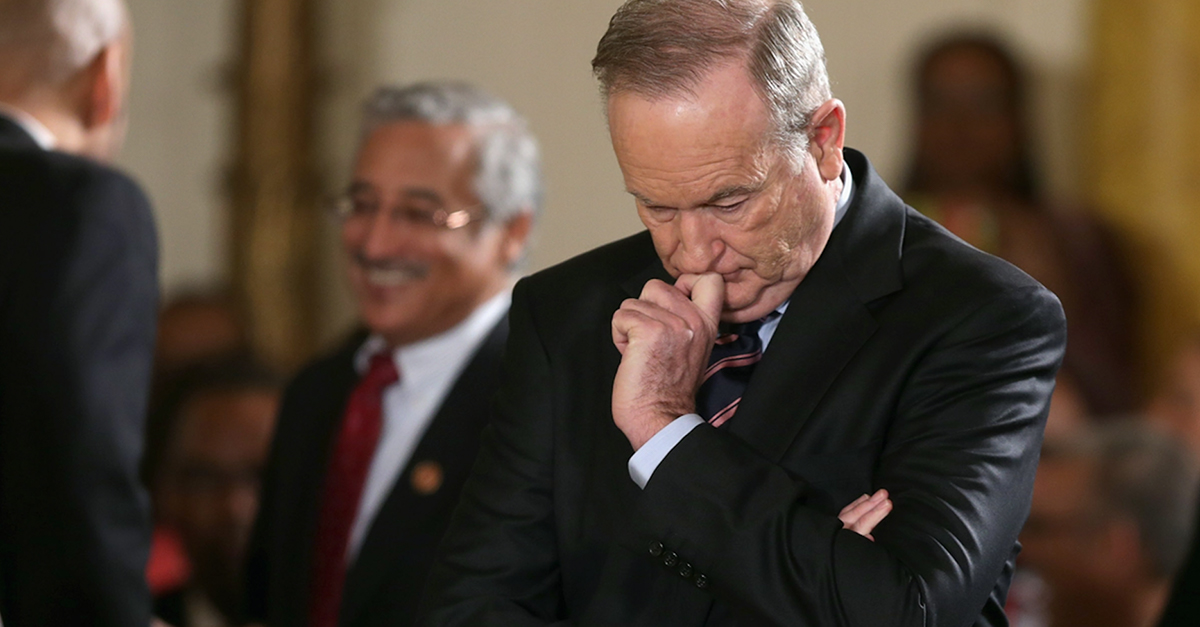 Photo by Chip Somodevilla/Getty Images
WASHINGTON, DC - FEBRUARY 27: Bill O'Reilly, host of FOX News Channel's The O'Reilly Factor, waits for the arrival of U.S. President Barack Obama during an event about Obama's 'My Brother's Keeper' initiative in the East Room at the White House February 27, 2014 in Washington, DC. As part of his 'Year of Action,' Obama announced a $200 million commitment from nine foundations to bolster the education and employment of young men and boys of color. (Photo by Chip Somodevilla/Getty Images)

Bill O’Reilly, long the face of the Fox News Channel was let go by the company on Wednesday afternoon. O’Reilly’s dismissal comes several weeks after the New York Times reported that he had been the target of multiple sexual harassment allegations. The Times reported in early April that O’Reilly had settled lawsuits with five women who accused him of sexual harassment or inappropriate actions. At the time, 21st Century Fox, the parent company of Fox News, promised to investigate the matter.

RELATED: As advertisers pull spots from “The O’Reilly Factor,” President Trump speaks out about the allegations against his old friend

“After a thorough and careful review of the allegations, the Company and Bill O’Reilly have agreed that Bill O’Reilly will not be returning to the Fox News Channel,” a statement from 21st Century Fox read on April 19.

Rumors of O’Reilly’s pending exit began to circulate as soon as the piece was published. Shortly thereafter, O’Reilly announced he was taking a brief vacation from the network, and would have fill-in hosts. New York reported on Tuesday that Fox head Rupert Murdoch was going back and forth with his two sons about O’Reilly’s departure.

“Three sources with knowledge of the discussions said that, while no final decision has been made, the Murdochs are leaning toward announcing that O’Reilly will not return to the air. Sons James and Lachlan have been arguing that O’Reilly needs to go, say these sources, though their father, Rupert, has resisted that outcome,” Gabriel Sherman wrote.

Sherman also wrote of raised tensions among female staffers at Fox, he explained, “Female Fox News employees are growing increasingly frustrated that the Murdochs have not forcefully confronted the company’s culture of sexual harassment in the wake of removing Roger Ailes.”

RELATED: What will Fox News do next if they dump Bill O’Reilly?

Prior to his departure, another woman revealed new accusations against O’Reilly. An anonymous former staffer alleged in court documents that O’Reilly called her “hot chocolate” and would grunt and leer at her.

On Wednesday, Sherman reported that O’Reilly’s fate had been decided, and that the longtime host was trying to negotiate a goodbye message to his audience.

O’Reilly has been the host of “The O’Reilly Factor” since 1996. Prior to his time at Fox, O’Reilly worked for ABC News, and “Inside Edition,” among other projects.