Just hours after insisting that President Trump was the “Martin Luther King Jr. of healthcare,” CNN commentator Jeffrey Lord made his way into another fight on the network.

“CNN Tonight” host Don Lemon kicked off Thursday night’s discussion addressing Lord’s comments. Also on the panel was CNN commentator Symone Sanders, who had gone up against Lord earlier in the day.

Referring to Lord’s minority coworkers, Lemon said “We are telling you that that comparison was insulting and you’re ignoring it.” Lemon asked Lord if he should take the negative reactions from his coworkers into consideration.

REALLY: A CNN commentator faced swift backlash after suggesting President Trump was the MLK of healthcare

Lord did not immediately answer Lemon’s question, choosing instead to tell the story of his father standing up for a black waitress in the South. Lemon stopped him, saying he wanted to hear what Lord had to say to his coworkers.

“Answer the question now! I don’t want to hear about stuff from 50, dar- damn years ago,” Lemon shouted. “I want to hear it now to the coworkers, to the people of color you work with on this network every single day who were offended by your remark!”

Lord said “This isn’t right. This is not moral. We don’t judge people by color in this country,” prompting Sanders to jump in. Lemon called Lord “crazy” if he thought people were no longer judged for the color of their skin.

REALLY: Your on-air panel will go better when you don’t confuse two minorities for each other

“Every day I walk out of my house, I am a black woman, Jeffrey. I don’t have the luxury of saying I don’t see color,” Sanders said.

“No, you’re an American,” Lord interjected.

“Every single day I walk out of my house someone sees me as a black woman regardless of how I see myself. I am a black woman. Don is a black man. [Former representative Bakari Sellers] is a black man,” she continued. Lord said that it was time to change the country. 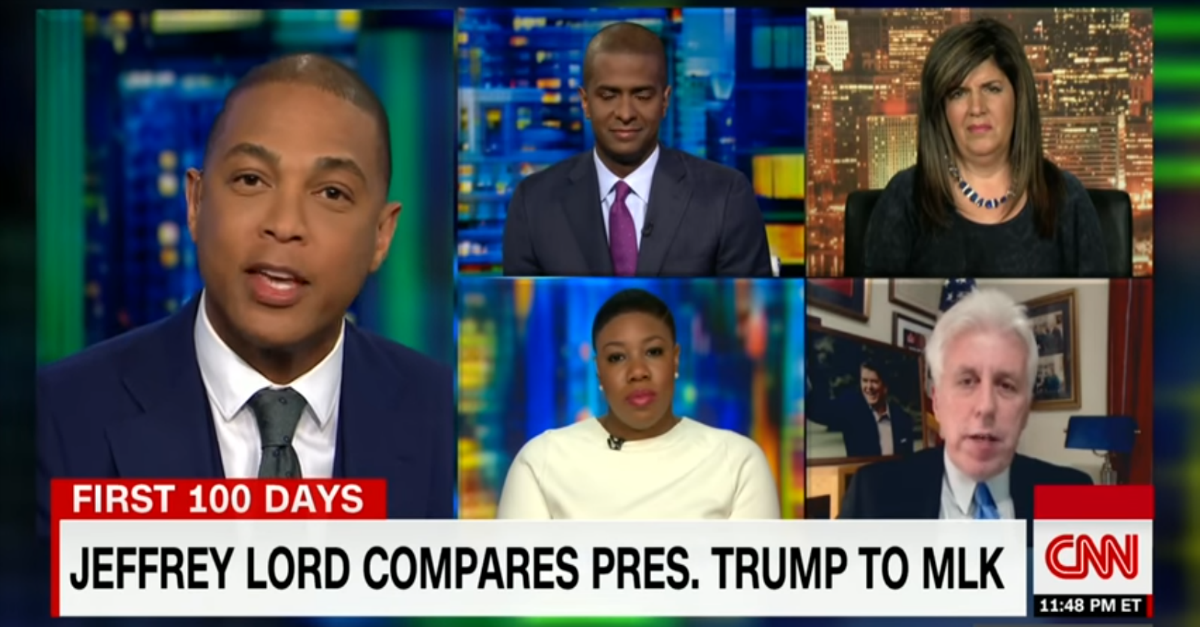