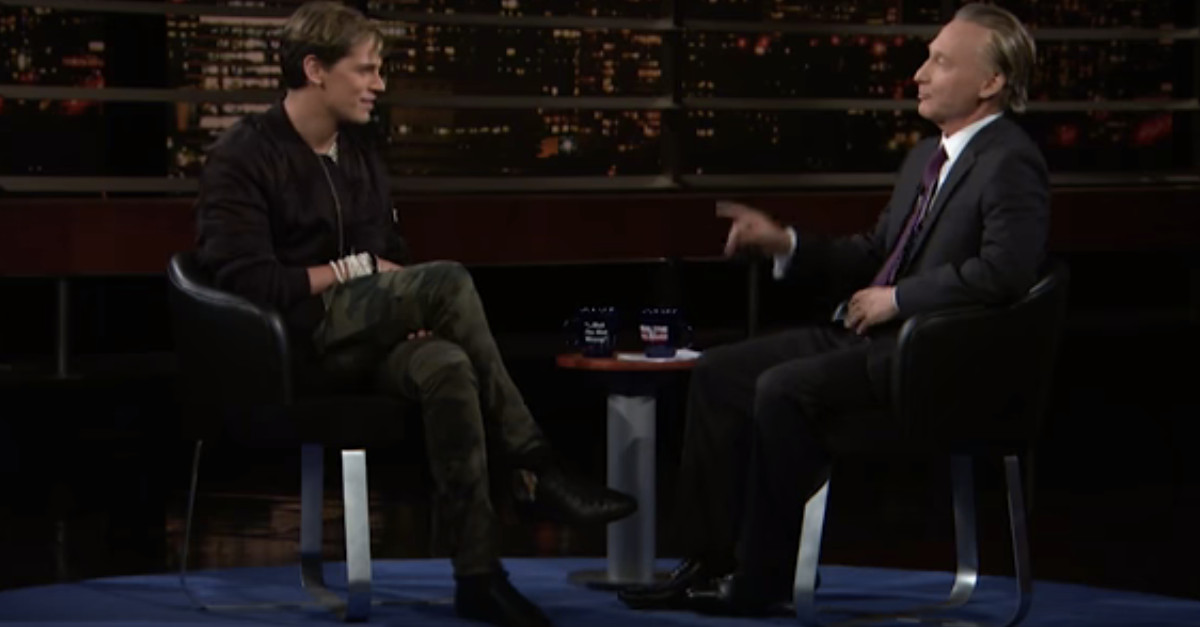 Bill Maher refused to cancel controversial journalist Milo Yiannopoulos’ appearance on his show this weekend despite calls for protest. Maher and Yiannopoulos’ conversation turned out to be much more cordial than anybody expected.

From the outset of the interview, Maher made it clear that he wanted their discussion to be open and fair, focusing on their similarities as opposed to those subjects Maher deems Yiannopoulos to be “colossally wrong” about. “If I banned everyone on my show who I thought was colossally wrong, I would be talking to myself,” Maher insightfully noted.

RELATED: Bill Maher bites back in response to calls to boycott his show for booking Milo Yiannopoulos

That didn’t mean, however, that Maher would resist the urge to make jokes — immediately noting to Yiannopoulos, “you look like Bruno.” For reference, this is Sacha Baron Cohen’s character Bruno.

First Maher asked Yiannopoulos to speak a little about about the contradictions of his persona. Yiannopoulos is a gay, Jewish man who has a black boyfriend. Maher noted that all of those defining characteristics of himself are the very characteristics Yiannopoulos chastises people for in his very public role. Yiannopoulos retorted with several jokes about gay people not showing up to work on time, and delighted in the audience’s immediate reaction of shock and horror — “you’re all so easy,” he said.

That’s when Maher shifted the conversation to a far more interesting topic: that people like Yiannopoulos are helped by the fact that liberals always take the social justice bait.

RELATED: It didn?t take long for a fellow Bill Maher panelist to tell Milo Yiannoloulos to ?go f**k? himself

Maher noted he has no problem with Yiannopoulos’ use of humor to make people feel uncomfortable, but was quick to criticize the young journalist for publicly humiliating women. There were several high-profile incidents in 2016 when Yiannopoulos encouraged his followers to berate celebrities on Twitter, one of whom was comedian Leslie Jones.

The entire exchange lasts about 11 minutes and is well worth watching in its entirety.