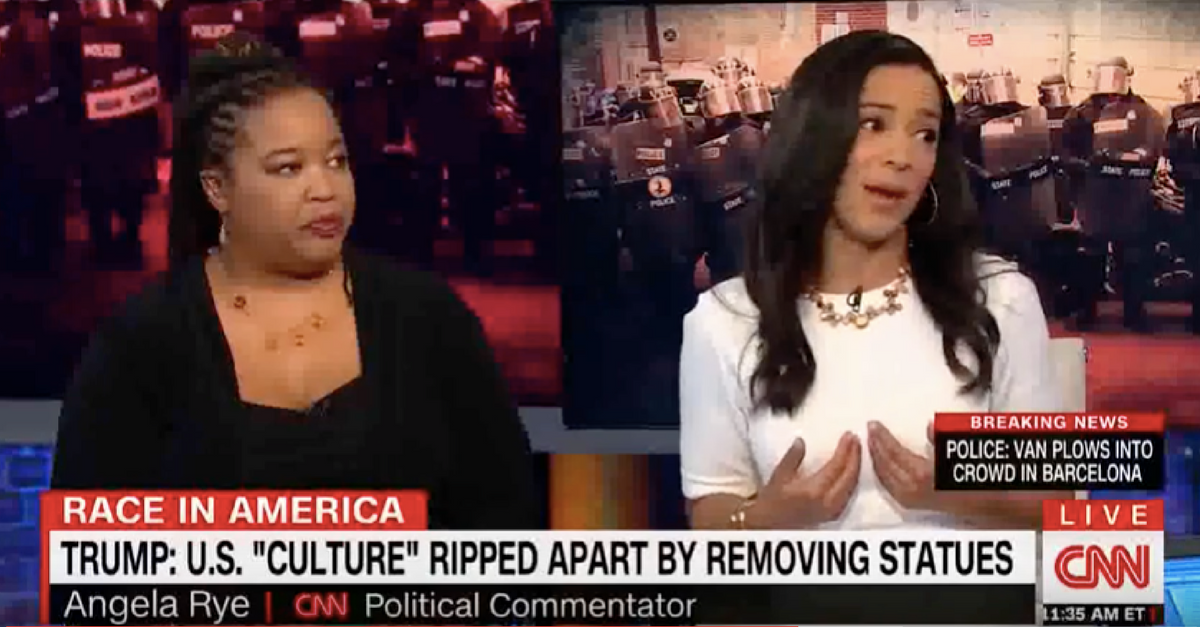 Days after President Trump wondered during a press conference if people would soon start demanding the removal of statues of George Washington and Thomas Jefferson in addition to Confederate statues, someone did just that.

On Thursday, several CNN panelists were discussing the difference between men like Washington and Jefferson, who help found our country, and Confederate men like Robert E. Lee, who fought to rip the United States apart. While some felt that comparing the two was “idiotic,” political analyst Angela Rye argued in a long monologue that we shouldn’t memorialize anyone who once owned slaves:

The heart of the problem is the way in which many of us were taught American history. American history is not all glorious. I love John [Avlon] to death, I couldn?t disagree more about George Washington. George Washington was a slave owner. We need to call slave owners out for what they are. Whether we think they were protecting American freedom or not. He wasn?t protecting my freedom. I wasn?t someone ? my ancestors weren?t deemed human beings to him. And so to me, I don?t care if it?s a George Washington statue or a Thomas Jefferson statue or a Robert E. Lee statue, they all need to come down ? I?m calling out white supremacy for what it is. And sometimes, what it is, John, are blind spots. Sometimes what it is, is not acknowledging this country was built upon a very violent past that resulted in the death and the raping and the killing of my ancestors. I?m not going to allow us to say it?s okay for Robert E. Lee but not a George Washington. We need to call it what it is.

RELATED: The woman who says she tied a rope around the neck of the toppled Confederate statue in Durham was led away in handcuffs

Rye closed her argument by suggesting that America is on the brink of repeating the mistakes of our past and stressed the importance of learning about and coming to terms with the ugly parts of our country’s history.

“We definitely need to learn about it so we don?t repeat it because we?re very close to repeating it right now,” she said.

The discussion came as a push to remove Confederate monuments and statues has been sweeping the nation in the aftermath of the recent “Unite the Right” rally in Charlottesville and the ensuing violence.

RELATED: As Confederate monuments around the nation fall, one city pulled theirs down in the dead of night