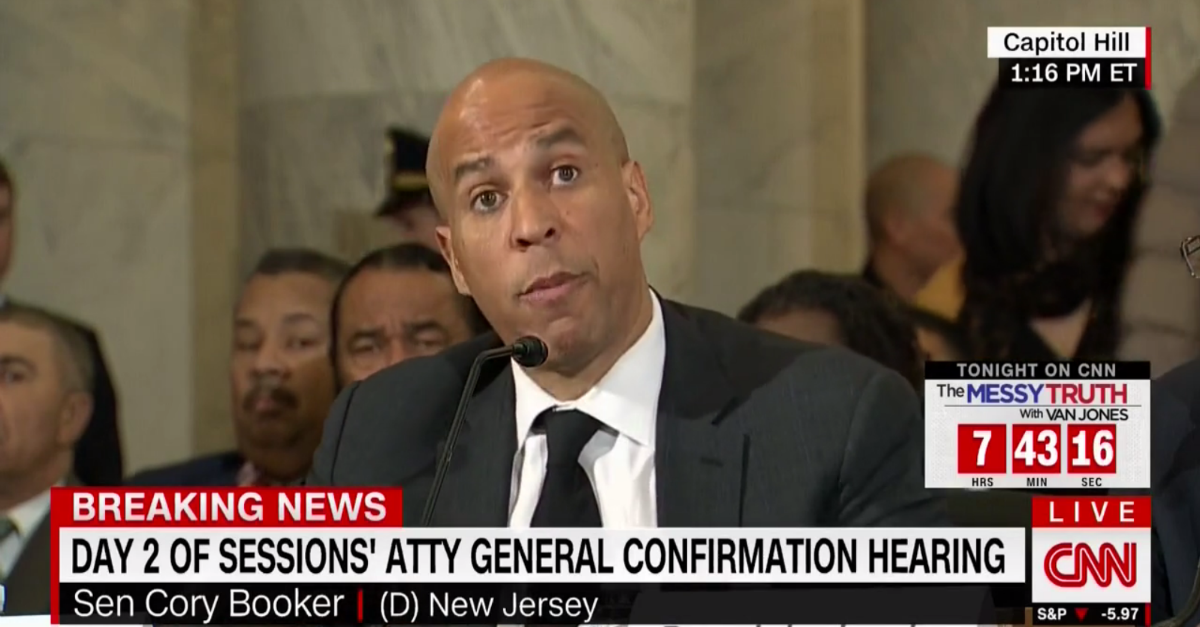 Sessions was initially appointed to serve as U.S. Attorney General by President-elect Donald Trump. But Sessions, whose Tuesday confirmation hearing was interrupted by several protests, was seen as controversial choice by criminal justice reform advocates.

Backed by members of the Congressional Black Caucus, Booker, who has taken his advocacy for criminal justice reform to the Senate, made the decision to speak out against his colleague with that advocacy in mind.

RELATED: Cory Booker explains why he’ll be the first senator to testify against a fellow senator’s appointment

“I work closely with many of you on this panel, on both sides of the dais, on matters related to criminal justice reform, and you know just how deeply motivated I am by the many issues that our next attorney general will heavily influence. Especially the crisis of mass incarceration,” he began.

Booker was aware than many of his colleagues were displeased with his decision to “break from Senate tradition.” However, Booker said that the need to stand with his conscience outweighed Senate norms.

“The march for justice in our country still continues.” Booker spoke of progress that had already been made and also recognized the call for “law and order.” Booker mentioned the crime he’s seen as a result of his own living arrangements, as he has voluntarily decided to live in high crime neighborhoods.

Booker said that he wanted an attorney general who would be “committed to supporting law enforcement and securing law and order.” But Booker noted that this was not enough: “America was founded heralding not law and order, but justice for all. And critical to that is equal justice under the law. Law and order without justice is unobtainable. They are inextricably tied together. If there is no justice, there is no peace.”

The senator spoke of Bloody Sunday, the incident on the Edmund Pettus bridge where Alabama law enforcement violently attacked Civil Rights marchers in the 1960s. The historical event was mentioned as an example of law and order without justice. From there, Booker spoke of the Civil Rights Act, which made the attorney general “the chief law enforcement of the United States.” With the updated distinction, the Justice Department was thereby given “the responsibility to pursue civil rights and equal protection for all of America.”

“Sen. Sessions has not demonstrated a commitment to a central requisite of the job, to aggressively pursue congressional mandate of civil rights, equal rights and justice for all of our citizens,” argued Booker.

Booker spoke of Sessions’ record. He noted that Sessions would be expected to defend justice for women, equal rights for the LGBT community, voting rights and the human dignity of immigrants, “but his record indicates that he won’t.”

Sessions’ office has already addressed this criticism, stating that Sessions would enforce the laws that already existed on the books regardless of his personal political beliefs.

But one thing that isn’t already on the books is criminal justice reform.

“His record indicates that as attorney general, he would object to the growing national bipartisan movement towards criminal justice reform,” Booker argued. “His record indicates that we cannot count on him to support state and national efforts towards bringing justice to the justice system.” The New Jersey senator reported that a broken criminal justice system is “biased against the poor, against drug-addicted, against mentally ill and against people of color.”

“The next attorney general must bring hope and healing to the country, and this demands a more courageous empathy than Sen. Sessions’ record demonstrates.” Booker said that an attorney general would need to also focus on the “most marginalized” groups. He also stated that the challenges of race would need to be acknowledged.

“I pray that my colleagues will join me in opposing his nomination,” Booker finished.

RELATED: Jeff Sessions was in the middle of his confirmation when a protest suddenly broke out

Some have called into question Booker’s criticism of Sessions on the topic of voting rights.

A video from February 2016 showed Booker saying that he was “honored” to work with Sessions on legislation to award the Congressional Gold Medal to the 1965 Voting Rights Marches Foot Soldiers:

I am humbled to be able to participate here and pay tribute to some of the extraordinary Americans whose footsteps paved the way for me and my generation. I feel blessed and honored to have partnered with Senator Sessions in being the Senate sponsors of this important award.