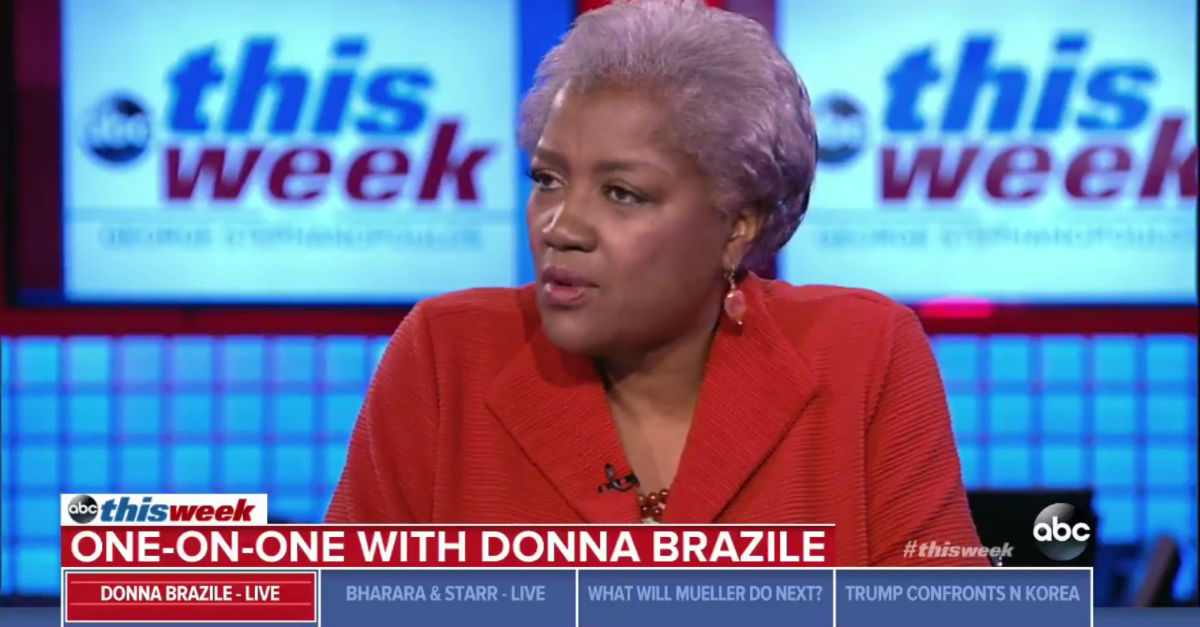 An excerpt from Brazile’s newest book, “Hacks: The Inside Story of the Break-ins and Breakdowns That Put Donald Trump in the White House,” was first published on Thursday. There, Brazile stated that she found “proof” that the DNC rigged the nomination process in favor of Clinton over Sen. Bernie Sanders (I-VT). Several Democrats shared their support of Brazile’s claim, including Sen. Elizabeth Warren (D-MA). Warren told CNN’s Jake Tapper on Friday “what we’ve got to do as Democrats now is we’ve got to hold this party accountable.”

In a Sunday interview with George Stephanopoulos of ABC’s “This Week,” Brazile said that she did not believe Warren meant to say that the election was “rigged.” She also denied finding proof as previously stated.

“I found no evidence. None whatsoever,” she told Stephanopoulos. She added that she merely told Sanders that she would investigate the claims.

The excerpt from her book, initially shared by Politico, indicates otherwise:

I had promised Bernie when I took the helm of the Democratic National Committee after the convention that I would get to the bottom of whether Hillary Clinton’s team had rigged the nomination process, as a cache of emails stolen by Russian hackers and posted online had suggested. I’d had my suspicions from the moment I walked in the door of the DNC a month or so earlier, based on the leaked emails. But who knew if some of them might have been forged? I needed to have solid proof, and so did Bernie.

So I followed the money. My predecessor, Florida Rep. Debbie Wasserman Schultz, had not been the most active chair in fundraising at a time when President Barack Obama’s neglect had left the party in significant debt. As Hillary’s campaign gained momentum, she resolved the party’s debt and put it on a starvation diet. It had become dependent on her campaign for survival, for which she expected to wield control of its operations.

Debbie was not a good manager. She hadn’t been very interested in controlling the party—she let Clinton’s headquarters in Brooklyn do as it desired so she didn’t have to inform the party officers how bad the situation was. How much control Brooklyn had and for how long was still something I had been trying to uncover for the last few weeks.

By September 7, the day I called Bernie, I had found my proof, and it broke my heart.

Brazile took over as interim chair for the DNC in July 2016 after former Chairwoman Debbie Wasserman Schultz was forced to step down, the result of an email leak revealed that DNC staffers aided Clinton’s campaign over Sanders’ in the primary. Schultz later argued that the primary was “by the books” and “followed the rules.” A WikiLeaks email leak only a few months later revealed that Brazile provided Clinton with some key details of the presidential debate questions ahead of time.