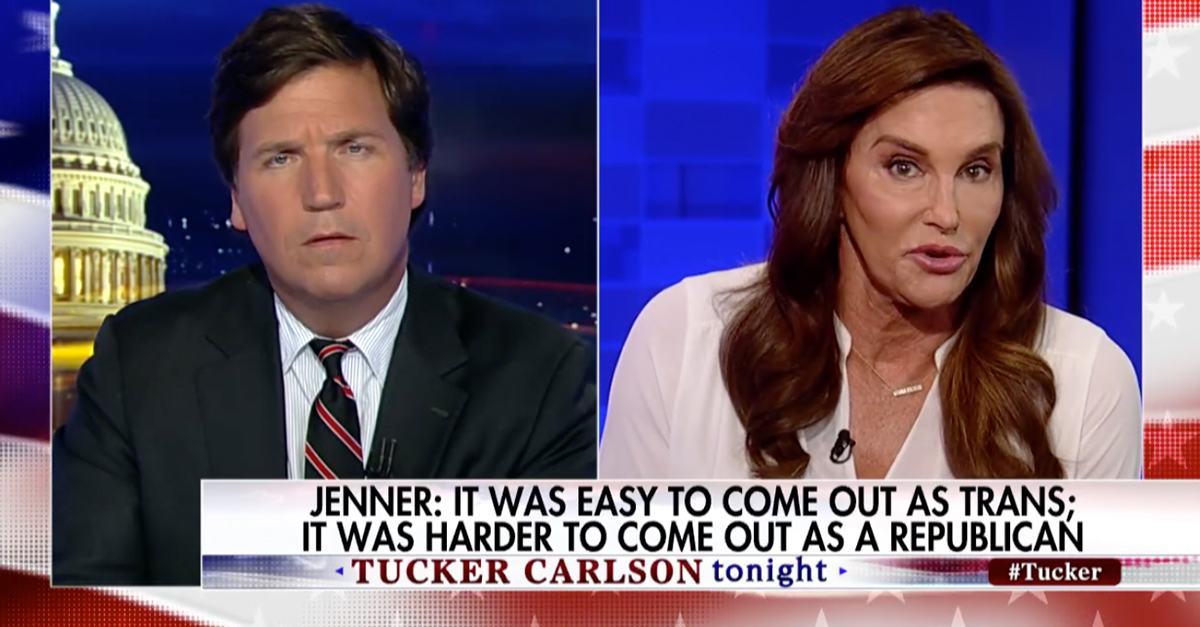 On Monday night, Tucker Carlson officially took over the 8:00 p.m. time slot from departed Fox News anchor Bill O’Reilly. O’Reilly was let go from Fox News Channel during the previous week amid mounting pressure after his alleged inappropriate behavior toward employees became public. Tucker Carlson had been anchoring his name branded show in the 9:00 p.m. hour, and moved to the coveted 8:00 p.m. primetime slot.

His first major guest was reality TV star and former Olympic athlete, Caitlyn Jenner — a decision that caused Carlson’s fans to have a borderline apoplectic reaction. Many Carlson fans didn’t like that the new 8:00 p.m. host chose Jenner, who is arguably the most well known advocate for transgender rights in the country. Caitlyn Jenner was promoting her new book, which details her life and decision to transition.

RELATED: Here’s what happened at Fox News on the first night without Bill O’Reilly

Fox News fans were not pleased.

Thousands of commenters cited their conservative and Christian values in their critiques of Carlson’s decision, and believed that it was a poor choice for a first guest.

“Why on earth would this be a guest on your first night replacing Oreilly [sic]? I hope this isn’t indicative of things to come. Terrible,” Facebook user, Joe Rattacasa noted.

Another fan opined that “the brothers,” aka James and Lachlan Murdoch “own” Tucker.

“Couldn’t watch the beginning of the end for you Tucker. You were the captain of your ship….. until tonight. The brothers own you now. A very sad day for your fans, for the Fox network,” wrote Barbra Sullivan.

Amid the thousand of insults about body parts, and sexual identity hurled at Jenner, were some viewers who felt that Jenner didn’t deserve the ire of the Facebook world. One user believed that Carlson’s fans were embodying the very things they disliked about liberals.

“These comments are what id expect from the left. Again, its a situation where we dont and cant understand yet are condeming her for it anyway. Bullying out of ignorance. Remind yall of anything?” Heather S. Moore added.

Facebook user Noah Acosta felt that by accepting Jenner and members of the LGBTQ community, that the narrative about conservatives being intolerant disappears.

“Why cant the rest of the GOP just accept LGBT members? You guys realize that you dont have to like them but just accept them and let them do what they want because they are our neighbors like everyone else,” Acosta writes. “If the GOP did this, the whole intolerant right narrative falls and the democratic party stops existing.”

During her segment, Jenner spoke to Carlson about her conservative values, not voting for Hillary Clinton and why she thinks that President Donald Trump should do more for the LGBTQ community.

“There’s a lot of issues out there for our community that I’m fighting for and I want the Republican Party to do a better job,” Jenner told Carlson.

“I would rather convince the Republican Party to do a better job when it comes to all LGBT issues than to try to convince the Democrats to lower taxes and lower regulations and let our country thrive economically.”