Here’s how Gen. James “Mad Dog” Mattis stood up for women at his confirmation hearing 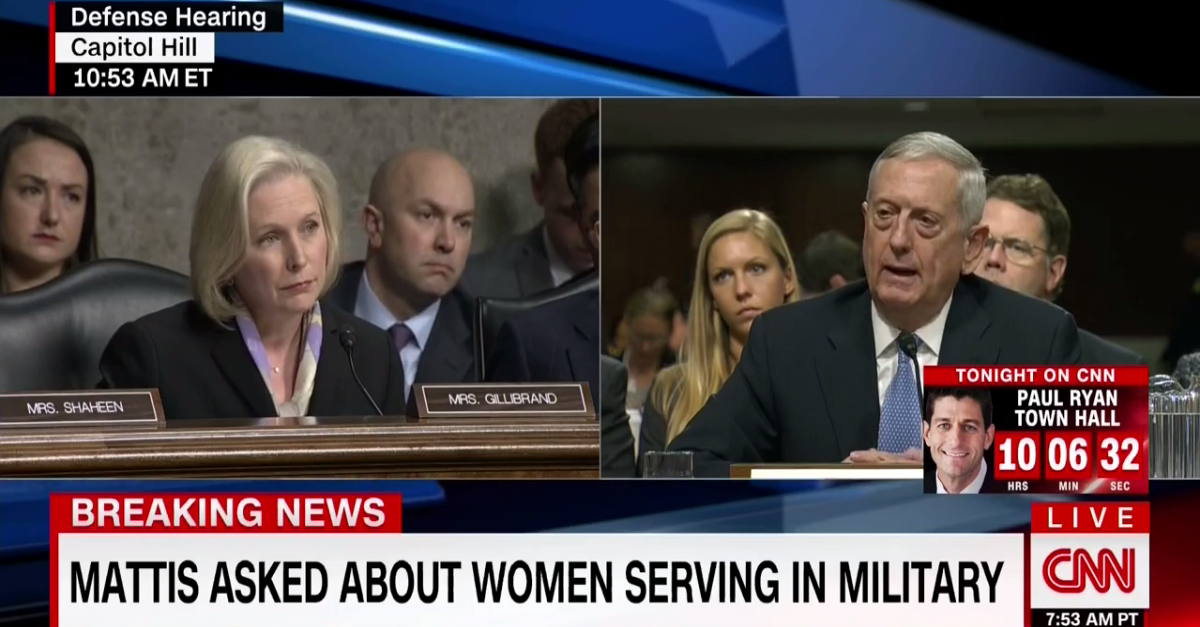 Gen. James “Mad Dog” Mattis sat through a confirmation hearing on Thursday following his appointment by President-elect Donald Trump to Secretary of Defense.

RELATED: This dying veteran gave Trump, Pence, and Mattis his last salute from his hospital bed

Sen. Kirsten Gillibrand (D-N.Y.) asked if Mattis was planning to remove infantry roles for women. “I come in assuming the people before me deserve respect for the job they did and the decision they made,” Mattis informed, assuring that it was unlike him to come into a new position with an agenda.

Gillibrand quoted some comments Mattis had made in the past arguing against women serving in certain roles in the armed forces. Mattis responded to those, saying that he was not in a government position at the time the statements were made. He also told her that he had the understanding the leading the Department of Defense included abiding by policies that have already been enacted to help women serve in a larger capacity.

“Do you plan to oppose women serving in these combat roles?” Gillibrand

Here’s how he answered:

I have no plan oppose women in any aspect of our military. In 2003 I had hundreds of Marines who happen to be women serving in my 23,000-person marine division. And this is 10 years before I retired. And I put them right into the front lines alongside everyone else.

Mattis met with Trump after the election to convince him of alternatives to waterboarding.

“What do you think of waterboarding? He said — I was surprised — he said, ‘I’ve never found it to be useful,'” Trump recalled following their meeting. According to Trump, Mattis also said “I’ve always found, give me a pack of cigarettes and a couple of beers, and I do better with that than I do with torture.”

When explaining how the interaction influenced his beliefs, Trump said “I’m not saying it changed my mind. Look, we have people that are chopping off heads and drowning people in steel cages, and we’re not allowed to waterboard. But I’ll tell you what, I was impressed by that answer.”