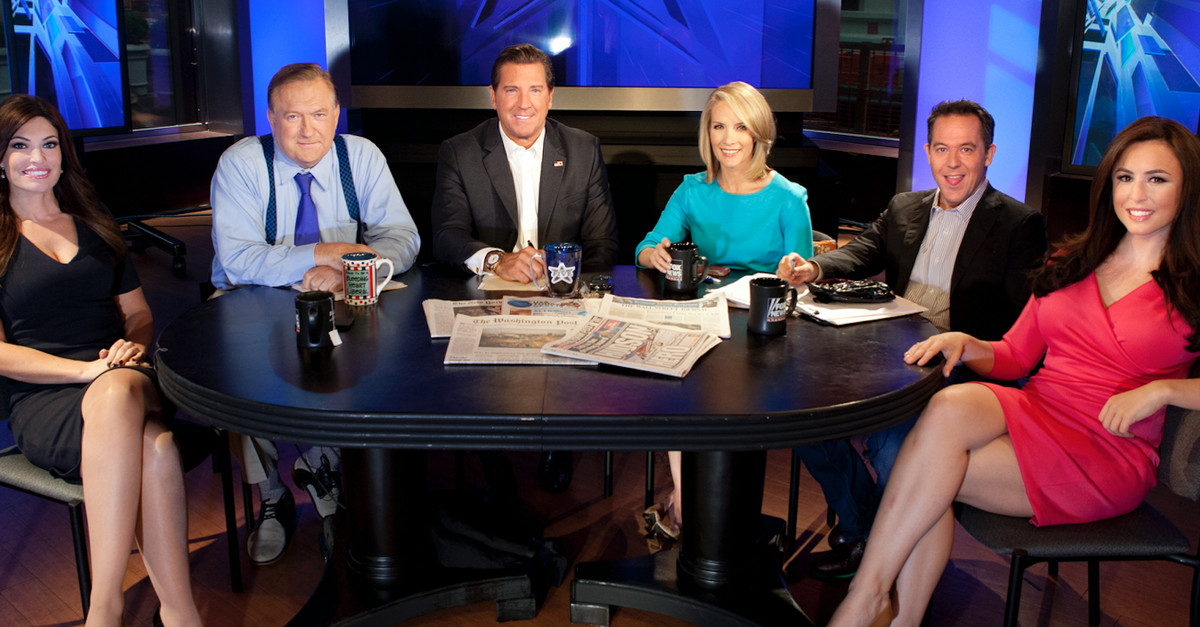 (Photo by Carlo Allegri/Invision/AP)
This July 1, 2013 photo shows, from left, Kimberly Guilfoyle, Bob Beckel, Eric Bolling, Dana Perino, Greg Gutfeld and Andrea Tantaros co-hosts of Fox News Channel's "The Five" following a taping of the show in New York. The program's deceptively simple premise is five folks sitting around a table at 5 p.m. EDT, kicking around the day's news and hot topics. This year "The Five" has emerged as Fox's second most popular show, behind only Bill O'Reilly, despite not having the larger pool of potential viewers that prime time usually provides. (Photo by Carlo Allegri/Invision/AP)

After the departure of Bill O’Reilly in late April, Fox News promoted Tucker Carlson to the 8:00 p.m. slot formerly occupied by “The O’Reilly Factor.” Among the changes Fox News made to their daily lineup, was the creation of a new show for Eric Bolling. Bolling has long been one of the more conservative faces on the network, and was one of the first talking heads to get on the Trump train.

RELATED: After days of speculation, Bill O’Reilly is out

On Friday, Fox News announced that Bolling’s new show will also feature  Katherine Timpf and Eboni K. Williams. Both Timpf and Williams have accumulated loyal fan followings after they began regularly appearing on the conservative news network. Bolling, Williams and Timpf will host an hour-long program called “The Fox News Specialists.” Each day the trio will be joined by two guests for a round table discussion. The five person panel format is similar to “The Five,” a show that used to occupy the 5:00 p.m. time slot that has now been moved to 9:00 p.m.

“Eric, Katherine and Eboni’s diverse opinions and backgrounds will provide our audience with an hour of informative and entertaining analysis on daily stories that are most important to Americans. The combination of the co-hosts’ expertise in business, millennial and legal topics, respectively, will make for lively and compelling discourse,” Suzanne Scott said in a statement.