The murder rate in Chicago rose during 2016, reports the Chicago Police Department.

By the numbers, there were 762 homicides, reportedly the highest in 19 years, 3,550 shooting incidents and 4,331 shooting victims. The murder rate was significantly higher than the 480 homicides, previously the most since 1997, reported in 2015.

President-elect Donald Trump tweeted out on Monday, stating a need to fix the city’s crime problem:

Chicago mayor Rahm Emanuel responded to Trump, saying “We are heartened he is taking this issue seriously and look forward to working with the new administration on these important efforts:”

Statement from Mayor Rahm Emanuel's spokesman on Trump Chicago crime tweet says "we are heartened he is taking this issue seriously." pic.twitter.com/HspTJVeZ3h

Chicago rapper Rhymefest weighed in on CNN. Rhymefest, whose real name is Che Smith, is known outside of his music career for being an activist for the city of Chicago and receiving an apology from Chicago police after being mistreated on video while trying to report a crime in 2016.

Reacting to Trump’s tweet, Rhymefest said, “If the president-elect is talking about federal intervention in terms of resources, then we welcome that.”

Rhymefest said that “it’s not the president’s job to stop violence,” going on to criticize Emanuel for misusing federal funds from the Department of Housing and Urban Development (HUD):

Why hasn’t the mayor released that $420 million of HUD funding for affordable housing? You know, this thing that’s happening in Chicago didn’t just happen out of a vacuum. It has a history. You know, the affordable housing, the projects, if you want to call them that, were torn down, you know, decades ago in Chicago, and the people who lived in those places were just pushed around to various areas of the city with vouchers and were never give an opportunity to get on their feet.

He went on to say that he “would ask Mayor Rahm Emanuel why haven’t these communities of major violence been invested in at the level that the money has been coming into the city?”

Rhymefest had previously invited Trump to tour the city of Chicago while on the presidential campaign.

The rapper used to co-write with rapper Kanye West but quit in February 2016, saying that West needed “help, in the form of counseling:”

@JakeChatty my brother needs help, in the form of counseling. Spiritual & mental. He should step away from the public & yesmen & heal

RELATED: Donald Trump and Kanye West look like a couple of buddies after this surprising meeting of the minds 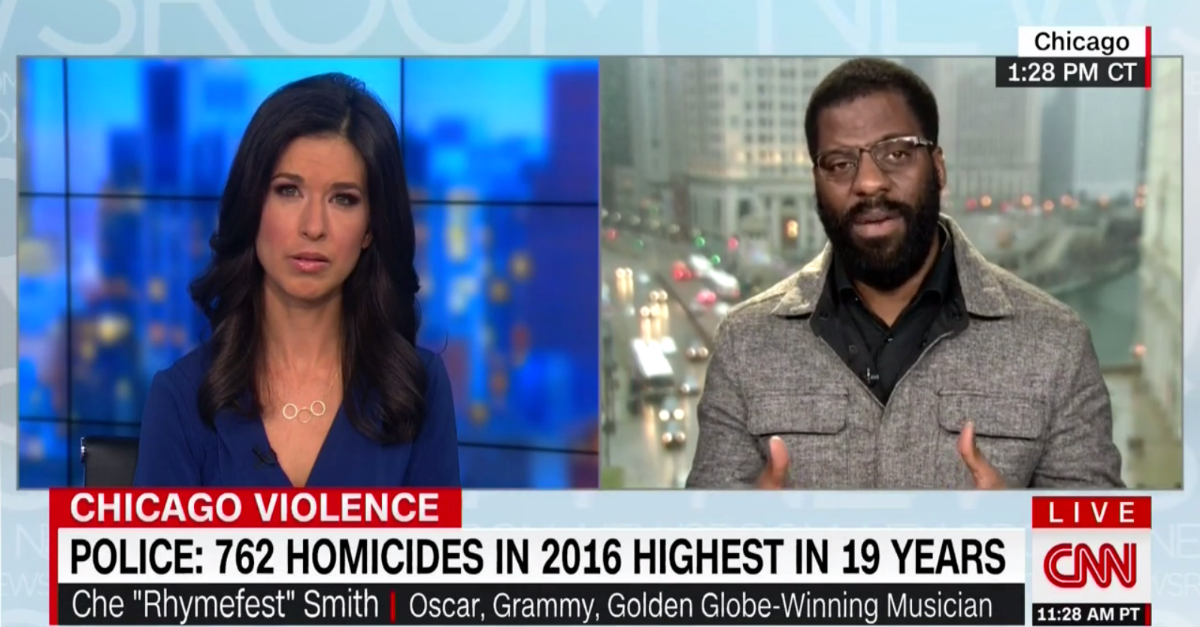