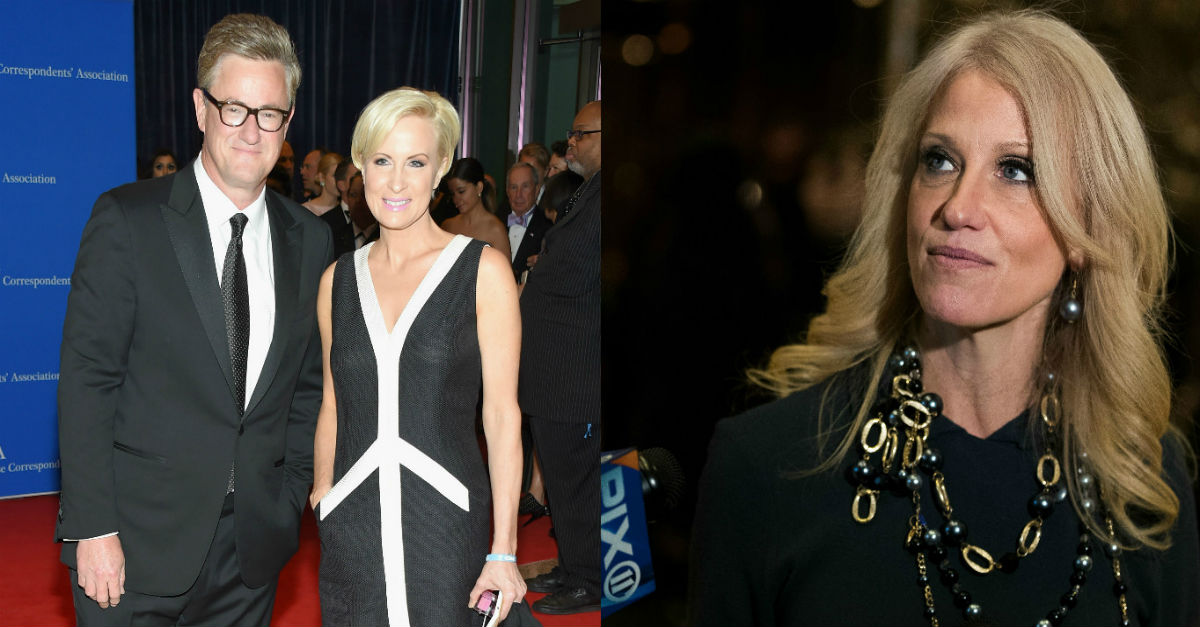 Counselor to the President Kellyanne Conway has fired back at allegations that she doesn’t actually like President Trump and has only been working for him “for the money,” which were originally circulated by Joe Scarborough and Mika Brzezinski.

On Monday’s episode of MSNBC’s “Morning Joe,” the co-hosts claimed that Conway’s off-air attitude greatly contrasts with her on-air persona. According to them, Conway “would shill for Trump in extensive fashion, and then she would get off the air, the camera would be turned off, the microphone would be taken off, and she would say ‘Bleeech I need to take a shower’ because she disliked her candidate so much.” The pair also alleged that she said, “This is just, like my summer in Europe. I’m just doing this for the money, I’ll be off this soon.”

Conway took to Twitter on Tuesday to shut down the “insults and insinuations,” writing, “Taking a moment from more important matters to respond ….”

She then shared a screenshot of her long response, which reads, “The hosts of MSNBC’s Morning Joe have become virulent critics of the President and those close to him. Ignoring insults and insinuations is a valuable skill. But when sentiments are attributed to me that are not true, it is necessary to respond. My beliefs, commitments and loyalties are plain to see.”

Taking a moment from more important matters to respond …. pic.twitter.com/B0uL0ME0Bi

She went on to address the specific allegations, saying, “The notion that I am serving for ‘the money’ or a ‘paycheck’ is absurd. As campaign manager, I made a fraction of what other consultants have made on unsuccessful presidential campaigns. Then I walked away from dozens of opportunities for millions of dollars, and instead walked into the White House. I would do it again.”

Lastly, Conway pledged her support to the president by adding, “It is a privilege to assist President Trump in the White House, just as it was during the campaign. I know him, I respect him, I believe in him, and I am confident in his capacity to be a transformative and successful President.”

RELATED: One actor hated Anderson Cooper’s eye roll so much, he sprinkled his criticism with a bit of homophobia