It was announced on Tuesday afternoon that FBI Director James Comey was officially fired by President Trump. His firing raised the eyebrows of those interested in the investigations into Russian interference in the election and possible collusion between the Trump administration and the Russian government.

CNN’s Anderson Cooper, host of “Anderson Cooper 360°,” raised such concerns to senior adviser Kellyanne Conway some hours after the decision.

When asked what she would say to those wondering about the timing of the move, Conway cited the FBI’s reputation and credibility.

Cooper asked his question again. He wondered why the administration worried over Comey’s handling of an investigation into former Secretary of State Hillary Clinton’s email server when they praised him for it on the campaign trail.

“This man is the President of the United States, he acted decisively today,” Conway said after accusing Cooper of “going back to the campaign.”

“He said one thing as a candidate and now he’s concerned as president?” Cooper later asked in clarification.

As Cooper attempted to explain the various concerns that even Republican senators shared, including Sen. Richard Burr (R-N.C.), he asked what the administration’s response was to allegations such as Sen. Chuck Schumer’s (R-N.Y.) that the firing was a “cover-up.”

“It’s not a cover-up,” Conway asserted. She went on to say that Comey had even assured the president that he was not under investigation, a statement found in Comey’s firing letter. When asked the circumstances why Comey would need to make such an assurance, Conway said that it was “between the President of the United States and Director Comey.”

“You don’t think it looks odd at all that the President of the United States is firing the guy who’s leading the investigation into the president’s White House and the people around the president?” Cooper inquired. Conway again pointed to the words in the firing letter where Trump thanked Comey for assuring him that he was not under investigation. 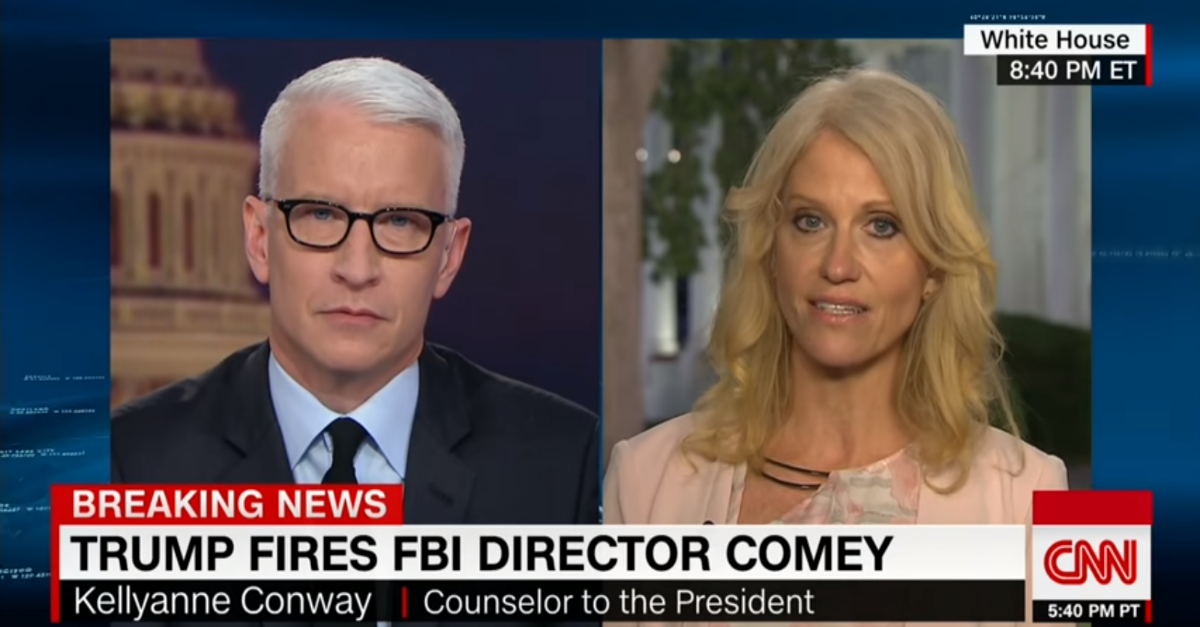