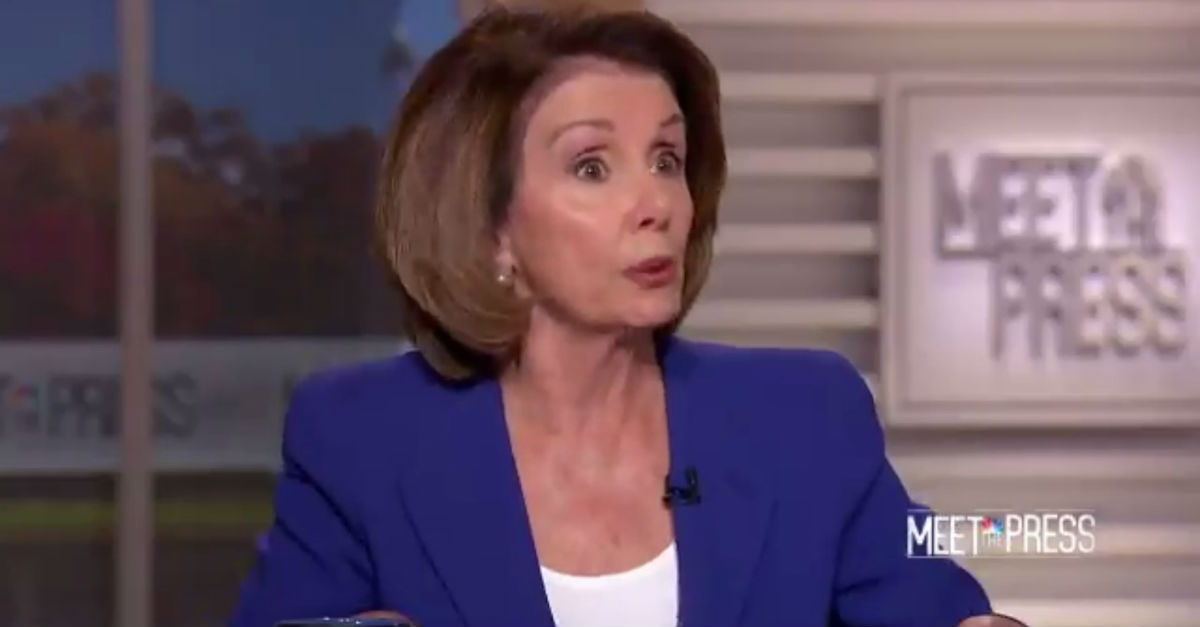 House Minority Leader Nancy Pelosi was quickly called out for her inconsistent response to the allegations of sexual misconduct against Rep. John Conyers (D-Mich.).

It was alleged last week that Conyers, a high-ranking Democrat and the longest-serving member of the 114th U.S. Congress, paid out at least one former female employee in a settlement after sexually harassing her at work. Documents obtained by Buzzfeed News and statements from the victim and fellow employees appeared to corroborate the claim.

NBC’s “Meet the Press” host Chuck Todd asked Rep. Pelosi about her about the claims during a Sunday interview. There, Pelosi approached the claims against Conyers with leniency, speaking of his right to “due process.”

“John Conyers is an icon in this country. He has done a great deal to protect women,” she added.

When asked why he’s entitled to “new due process,” Pelosi quoted her belief that he would “do the right thing.” However, Pelosi stated that she could not speak on whether or not she believed Conyers’ accusers.

.@NancyPelosi: Accused Congressman Conyers is an "icon" in our country. #MTP pic.twitter.com/4QlKKJTIJP

Moore has been accused of sexual misconduct by several women. One accuser said Moore touched her over her underwear and tried to force her to touch his genitals when she was 14 and he was 32. Many of the other accusers were ?between the ages of 16 and 18, and [Moore] was in his early 30s? at the times of the alleged incidents. The accusations have led to multiple calls for him to “step aside.”

Pelosi joined the chorus of critics and at one point was quoted calling Moore a “child molester.”

Her different stances did not go unnoticed.

Nancy Pelosi on John Conyers: "We are strengthened by due process. He's an icon."

When Nancy Pelosi isn't even on your side in a case where the perp is 88 yrs old and in a safe seat, why on earth would you report sexual harassment?

Nancy Pelosi's interview with Chuck Todd this morning is a devastating showpiece of our era's bipartisan moral blindness.

Dems had an opportunity to lead on sexual assault and are completely blowing it. https://t.co/pu2OcaWKvQ

Some have contrasted Pelosi’s reaction with that of another prominent woman in politics, who similarly appeared on a Sunday talk show to discuss the allegations of sexual misconduct plaguing politics.

Fiorina also listed various accused individuals by name, noting that their behavior was tolerated by those around them:

And I think what?s most — I think what we all need to think about, but frankly particularly men need to think about, and in virtually all these cases, people knew. People knew this was going on. You can’t tell me that no one knew what was going on with Roy Moore and John Conyers or Al Franken or Charlie Rose or Roger Ailes or [Harvey] Weinstein. People knew. Men knew, and women knew.

And so, while we all express outrage now, and people say, should they step down or should they not, I think the question going forward is, when are we going to stop tolerating this behavior and respecting the men who do it? Because all of these men have been respected, despite the fact that people knew.