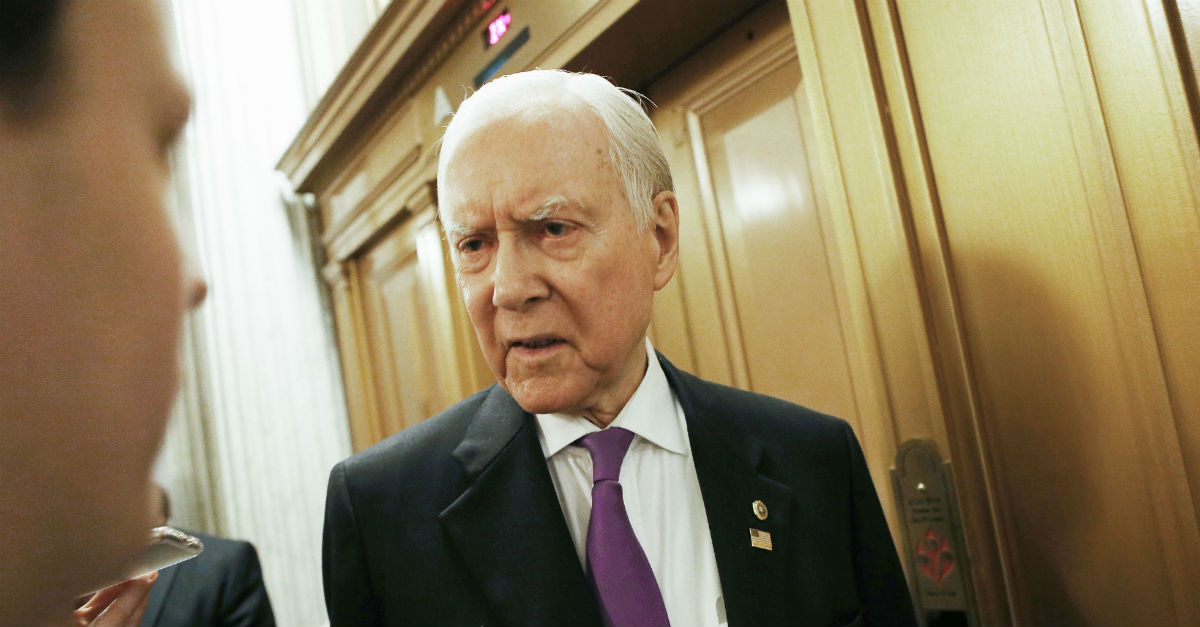 Mario Tama/Getty Images
WASHINGTON, DC - FEBRUARY 13: U.S. Sen. Orrin Hatch (R-UT) is interviewed after walking out of the Senate following the vote confirming the nomination of Steve Mnuchin to become Treasury Secretary on February 13, 2017 in Washington, DC. Democratic senators complained of Mnuchin's role as a Wall Street insider ahead of the Senate vote on his nomination tonight. (Photo by Mario Tama/Getty Images)

Sen. Orrin Hatch (R-Utah) took many by surprise after he used a term that is much more suggestive than he might have realized.

On Monday, POLITICO shared a quote from Hatch regarding Republicans’ approach to tax reform in Congress:

?We?re not going back to health care. We?re in tax now. As far as I?m concerned, they shot their wad on health care and that?s the way it is. I?m sick of it,? Senate Finance Chairman Orrin Hatch (R-Utah) said Wednesday, a day before he outlined his committee?s agenda for the fall.

According to Mediaite, the internet was quick to show Hatch that the term “shot their wad” was actually quite sexual in nature.

Hatch’s office defended the statement, saying that it dated back to the Civil War:

As few of you were alive during the Civil War, here's a valuable jargon lesson on "wads" and the shooting of them. https://t.co/dOYvcfgImO pic.twitter.com/wk9aaNb3s2

“As few of you were alive during the Civil War, here’s a valuable jargon lesson on ‘wads’ and the shooting of them,” they argued. But several of the blunt responses to the tweet suggests that the explanation convinced very few.

If Hatch’s office is trying to convince the American public that the senator himself is old enough to remember the Civil War, then the following picture with “Hamilton” creator Lin-Manuel Miranda and Hatch’s reported presence at the Battle of Bunker Hill might be evidence for the claim:

Good to see my old friend Hamilton today. I was just a Jr. Senator when I voted to confirm him as Treasury Sec. -OGH pic.twitter.com/rORsCoD2pW

The Battle of Bunker Hill. https://t.co/KTaxxpfxKY

Otherwise, the senator might feel some comfort in knowing that he isn’t the first to make such a public mistake…

…and he certainly won’t be the last.