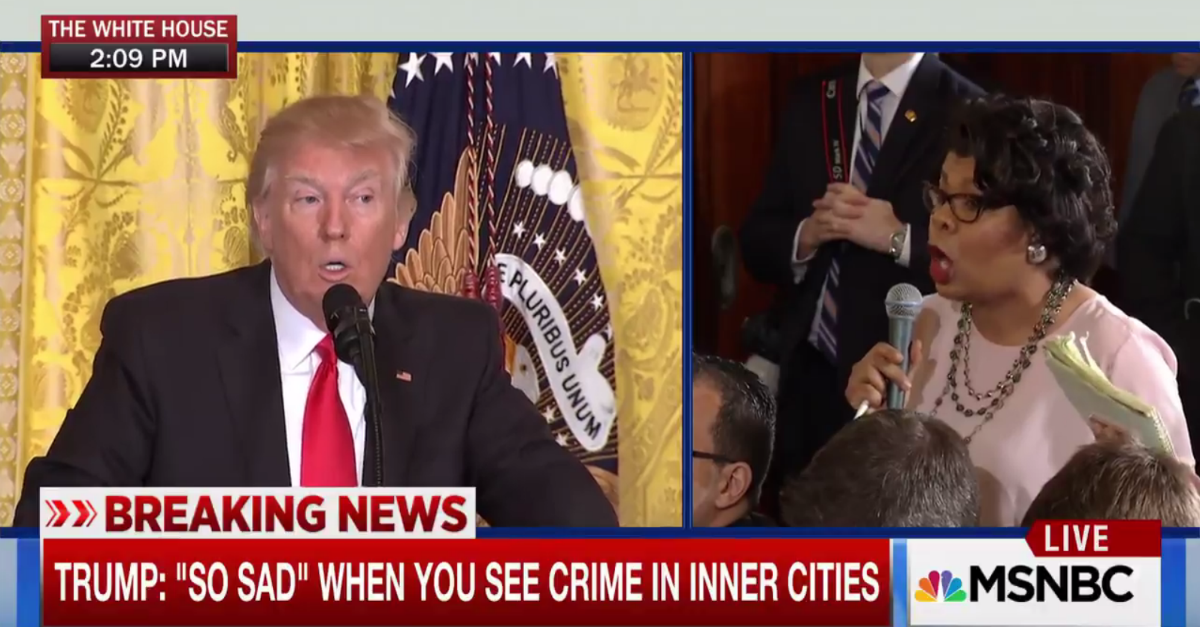 President Trump took a question from April Ryan of the American Urban Radio Networks during a Thursday afternoon press conference.

There, Ryan asked Trump about his upcoming executive order regarding historically black colleges and universities (HBCUs) and if he would include the Congressional Black Caucus in his promise to address various issues regarding urban development and black communities.

Trump to @AprilDRyan on the Congressional Black Caucus : "Are they friends of yours?" pic.twitter.com/FMtl3qxU9w

Trump asked Ryan if she wanted to set up the meeting between himself and the CBC.

“Are they friends of yours?” he inquired.

Trump just asked a black journalist if she was "friends" with the Congressional Black Caucus and wanted to set up a mtg for him w/ the CBC. pic.twitter.com/whnDJLI8MI

Trump just asked @AprilDRyan to set up a meeting for him with the Congressional Black Caucus. "Are they friends of yours?"

Ryan, who had earlier accused Office of Public Liaison communications director Omarosa Manigult of intimidating her, addressed the exchange on Twitter.

I am a journalist not a convener! But thank you for answering my questions. https://t.co/fe9cGXG46w

“I am a journalist not a convener!” she wrote, thanking Trump for taking her question.

The CBC responded to Trump shortly after the exchange, linking to a letter they sent the president requesting a meeting:

Hi, @realDonaldTrump. We’re the CBC. We sent you a letter on January 19, but you never wrote us back. Sad! Letter: https://t.co/58KiuHmITF

“If you are serious about addressing issues in the African-American community, you would be wise to tap into the decades of expertise held by Members of our Caucus,” they wrote.

The letter was dated Jan. 19, approximately a month before today’s exchange took place.