The lesson of Greg Gianforte: Bashing journalists, even literally, isn’t much of a liability 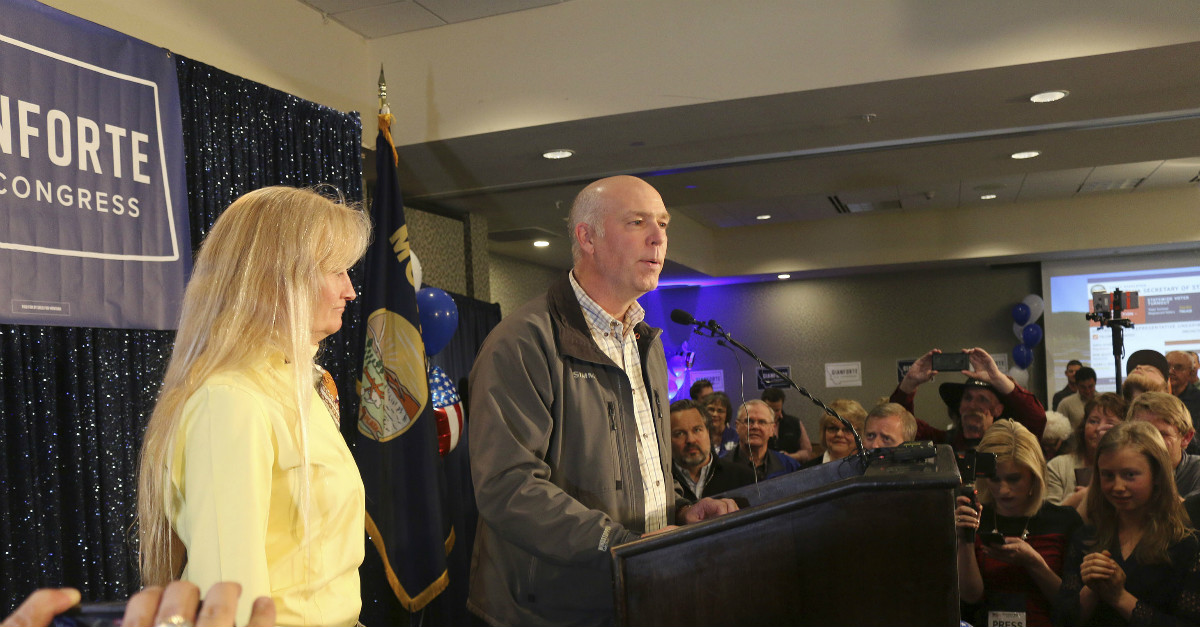 AP Photo/Bobby Caina Calvan
Republican Greg Gianforte addresses supporters at a hotel ballroom after winning Montana's sole congressional seat, in Bozeman, Mont., Thursday, May 25, 2017. In his speech, Gianforte apologized for a altercation at his campaign headquarters with a reporter on the eve of the special election. The altercation led to a misdemeanor assault citation. (AP Photo/Bobby Caina Calvan)

He had once seen in Taunton a barely intelligible film about newspaper life in New York where neurotic men in shirt sleeves and eye-shades had rushed from telephone to tape machine, insulting and betraying one another in surroundings of unredeemed squalor. – “Scoop” by Evelyn Waugh

Ah, for print journalism’s days of yore, when every reporter had a flask in the top drawer of his desk, editors used to wobble through the office in the late afternoon after spending the first half of the day reviewing copy at the bar, and staffs were packed into giant warehouse newsrooms thick with grime and sociopathy. Having once worked at a magazine, I can attest that the three-martini lunches and the nine-hour pub crawls haven’t been completely retired, but most journalists are simply too glued to their computers in the frenzied internet age to misbehave like they once did.

Nonetheless, real grit and danger do still exist, and Ben Jacobs probably didn’t think he was going to find them in Montana. That was where The Guardian reporter interrupted Republican House candidate Greg Gianforte’s huddle with a Fox News team to ask a question about the CBO. Gianforte politely asked him to leave, then suddenly body slammed him and punched him, breaking his glasses, all of which was later corroborated by audio from Jacobs’ recorder.

Jacobs got a trip to the hospital and one hell of a story to tell his kids (I simply must get myself assaulted by a politician before I leave Washington), while Gianforte instantly became America’s most notorious Republican, an impressive feat in the age of Donald Trump. He won Montana’s special election anyway.

Politico is pretending this morning that it was close, but it wasn’t: Gianforte beat Democrat Rob Quist by 7 percent, with a libertarian upstart siphoning off an additional 6 percent. The newest Republican member of Congress will now be dodging assault charges, which no doubt has Paul Ryan adding Tylenol Extra Strength to his morning routine.

RELATED: ?Body-slamming? a reporter just made Greg Gianforte a whole lot of money

Following Barack Obama’s election in 2008, Republicans immediately began winning contests, starting with Chris Christie and Bob McDonnell in 2009. Democrats have lost House elections in Montana and Kansas, and with Karen Handel holding steady in Georgia and Christie’s lieutenant governor Kim Guadagno appearing strong in New Jersey (Democrats, being Democrats, are looking to run against Guadagno a former Goldman Sachs executive, because that’s what voters are thirsting for right now), their ace strategy of gargling their own saliva in fury over Donald Trump does not seem to be returning results. Gianforte won by bashing “the swamp” and promising to “make America great again.” In red states, at least, The Donald’s appeal still holds.

When I first heard about Gianforte and the assault, I assumed he was a Todd Akin sort, an outsider who’d crashed his way into the Republican Party unschooled in the art of politics. Not so. According to a friend from Montana, he’s something of a senior figure in the local GOP, who spurred a tech boom in Bozeman with his company RightNow Technologies and worked closely with Senator Steve Daines. Yet, surely, he can’t be fit for office after not just body slamming a reporter but repeatedly punching him. That’s a lack of self-restraint far beyond caving to the stresses of the campaign trail.

Or, maybe it’s Jacobs’ fault he was beaten up for doing his job. That’s the operating theory of Rush Limbaugh, who on Thursday sarcastically condemned the “studly, manly, brutish Republican” for assaulting the “insolent and disrespectful and whiny and moany and accusatory” reporter. I’m a pajama-clad snowflake so handle my analysis with delicacy, but it seems Limbaugh is saying that aggressively approaching someone and asking him a question makes one a wuss.

Someone should probably notify Jesse Watters.

Still, Gianforte did handily win the election. Though many Montanans voted before the assault, plenty cast their ballots after the fact, too, and even Politico is acknowledging that bashing the press is hardly an electoral liability. Far from the fedora-wearing inebriates of Waugh’s time, voters today see us as a brittle and useless crust between themselves and the truth, a dishonest caste over which they have no democratic power to remove. Some of that is because the press is often wrong; some is a result of the electorate’s culture-war prism, which sees a chattering pack of hipster, glasses-wearing East Coasters and assumes we’re not to be trusted.

So Congressman Gianforte it is, then.