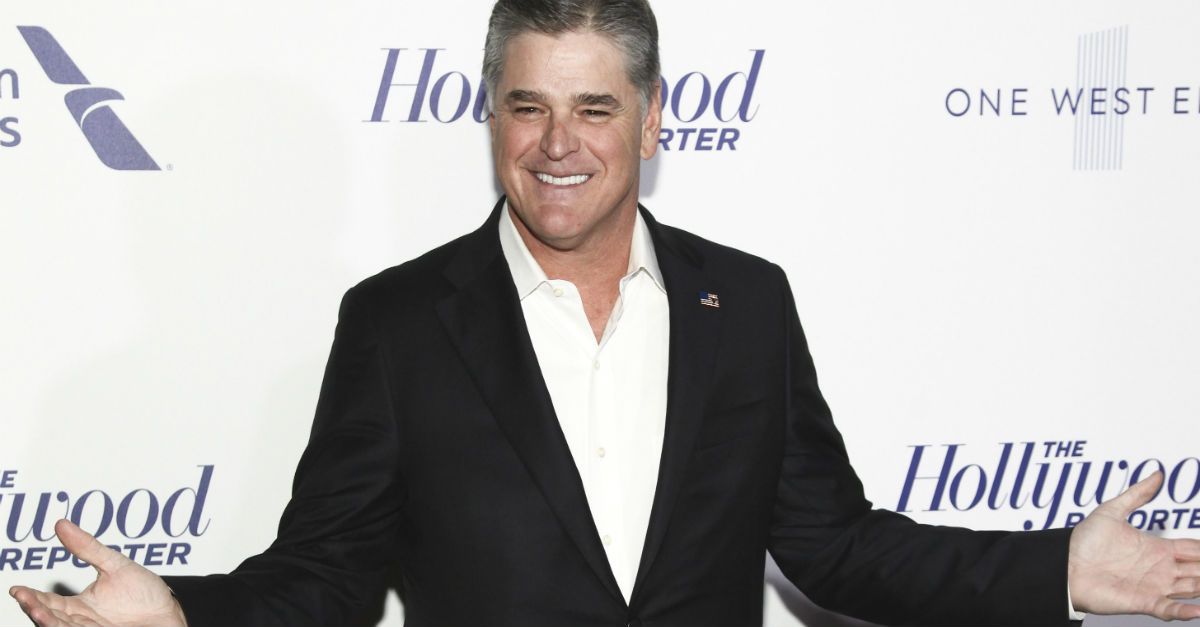 Sean Hannity has always been campy and not afraid to show it. One imagines the Fox News host flying to work with a star-spangled cape billowing behind him, or, alternatively, riding a giant eagle, off to spread freedom to Narnia. In the halfway functional conservatism of gauzy yesteryear, Hannity was Kenneth Parcell, a bit too eager and determined, but still appreciated for his enthusiasm.

So what are we to make of this new Hannity? He still hangs-ten to whatever wave conservatism happens to be riding, but now he seems to have wiped out in the foul conspiratorial waters of the Trump era.

Let me back this metaphor up. Hannity has spent the past week sleuthing through the evidence bags in the unsolved killing of Democratic National Committee staffer Seth Rich. His operating theory is that it was Rich who leaked embarrassing internal DNC information to Wikileaks during the presidential campaign, giving Democrats no choice but to murder him.

Hannity’s theory is contradicted by law enforcement accounts, which hold based on the preponderance of evidence that his death was a robbery gone wrong in the still-dicey D.C. neighborhood of Bloomingdale—hence why none of Rich’s possessions were taken. It’s been repudiated by Rich’s parents who in a heart-wrenching op-ed for the Washington Post yesterday asked conservative media figures like Hannity to stop rifling through their shattered lives. An initial Fox News account verifying some of what Hannity now claims has been retracted.

Yet Hannity still clings to it still like the obsessive freelancer doing the investigating in so many movies: his friends grow weary of his preoccupation, he loses his job because he can’t let go, his deeply skeptical wife even walks out, but he remains on the case, shouting at one point, “I’ve almost solved it! There’s just this one missing piece!” In fact, Hannity actually tweeted something similar to that last night.

Ok TO BE CLEAR, I am closer to the TRUTH than ever. Not only am I not stopping, I am working harder. Updates when available. Stay tuned!

Only unlike on the silver screen, where the self-styled gumshoe stares at a snow globe on his desk and suddenly realizes there was only one person who had enough traction on his truck to navigate the bad weather the night of the murder, Hannity doesn’t have any concrete evidence beyond the word of an Internet entrepreneur named Kit Dotcom who has been wanted by the FBI. It’s one thing to suspect a powerful entity like the DNC of nefariousness, even conspiracy. It’s quite another to drag a grieving family through the emotional mud based on pure air. Occam’s Razor dictates this was a robbery gone wrong and unless substantial proof emerges that shows otherwise, Hannity should keep his obsessions to himself.

But while we’re engaging in baseless conjecture, how about this whodunit: what in the hell is going on with Sean Hannity? He’s promised to lay off the Seth Rich case, presumably after he was ordered to do so by furious Fox News executives, but was that just a red herring?

Hannity tweeted before his show last night that he had a “huge announcement” about his “future at Fox.” He then revealed on Twitter that he’d just gotten off the phone with his attorneys and “You may think I have Lost [sic] it, but they are so amazing.” (It is sad to watch someone I used to listen to as a kid melt down like this.) His on-air announcement amounted to him saying he was “here to do my job as long as they want me,” meaning Fox News. He later ended his show by saying “we’ll, hopefully, see you tomorrow.” His Twitter feed this morning is brimming with exhortations to fight a Media Matters boycott of his advertisers.

According to the post-it note evidence chart that I’ve been assembling on my living room table as I’m briefly illuminated by the headlights of a sinister car pulling into my driveway, Hannity may be under some serious scrutiny right now. Rupert Murdoch’s reformist sons have already canned Fox News’s two most perennial fixtures, Roger Ailes and Bill O’Reilly; at the very least, I would expect Hannity to handle the Seth Rich matter with caution in the near future.

Then again, Hannity has always been merely a cipher for the popular right, and this is where too much of the popular right is at the moment. The Donald Trump presidency has sent both sides on a swan dive into the fever swamps. Let me know when you guys find the KGB agents hiding in your attic and the Clinton hitmen fleeing the country; I’m going for a walk.