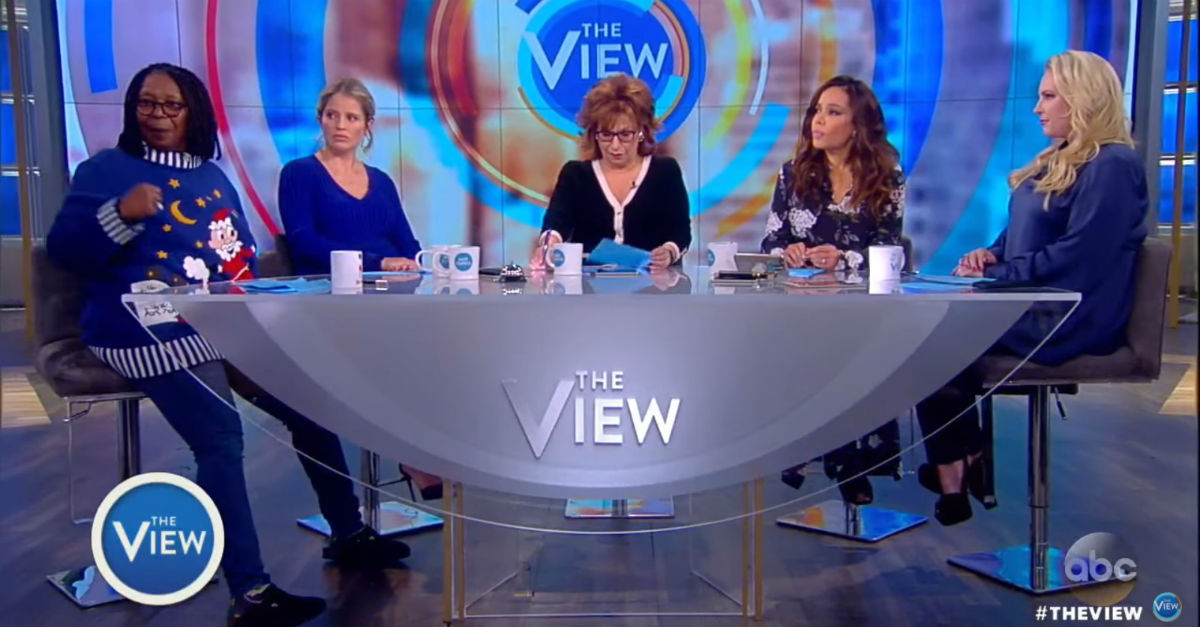 A Thursday segment of “The View” came with a discussion about the need for diverse political perspectives.

Whoopi Goldberg began by speaking of the conservative voice that Meghan McCain, daughter of Sen. John McCain (R-Ariz.), brought to the table. McCain regularly clashes with her colleagues, and even a few guests, while discussing politics on the show.

“It’s important for you to know because people assume that who they see is who they are,” she said. Goldberg mentioned that she was pro-choice, but also owned a shotgun and had no issues using it on her property. She continued her point by saying, “we are mostly shades of things.”

“We evolve and we change. And what we can’t do as Americans, regardless of where you live, is let the media dictate how you feel,” she added.

Goldberg went on to say that she and her fellow co-hosts sought to discuss even the most difficult and divisive conversations to show others that “it could be done.”

Sunny Hostin also addressed McCain, acknowledging that she had “a hard job.”

“This is a unique table,” she said. “The only people who understand what it’s like are the people sitting here. And I think you’re doing a great job.”

McCain drew on her past experience at Fox News and said that working at the network was fun because other people shared her views. She added, “there is a point that Trump’s America has changed things for me in a lot of different ways, because I do feel like I don’t believe in echo chambers anymore.”

“I think working on this show is important,” she said.

McCain said she found herself in a strange position as a conservative with Trump as president. She sought to explain her positions as clearly as possible lest the audience assume she automatically sided with every person on the right.

“I give people more credit than that,” Hostin responded. “People are not one-dimensional … I hope that people are better than that.”

On Wednesday, former co-host Candace Cameron Bure opened up about her time on the show.

“I kind of knew that maybe what I was signing up for and was thinking wouldn’t be exactly what it would be, so I was prepared,” she said.

Burre said she was under the impression that the show would address social views, but soon realized that she would need to provide more political commentary. It was not easy that her time on the show also occurred during the 2016 presidential election.

When explaining how she got through it, Burre said, “I just prayed a lot in front of people.”

RELATED: “Does that make you feel good at night?” — “The View” throws down over saying Hillary won