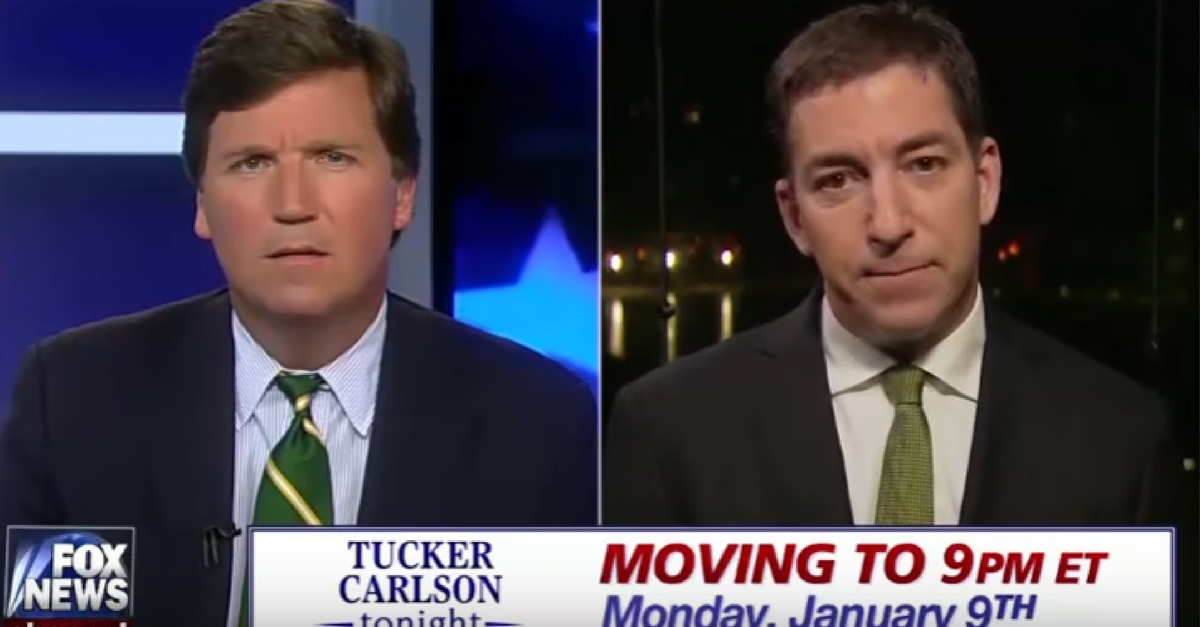 On Friday’s episode of “Tucker Carlson Tonight,” Tucker host Carlson and his guest, The Intercept journalist Glen Greenwald (who Carlson says has been “spanking The Post like the bad little paper it is”), absolutely destroyed The Washington Post over their recent running of false stories.

Over the past six weeks, The Washington Post has published two stories that turned out to be entirely fake, one about the Russians hacking the U.S. electric grid from Vermont and the other about Russia launching a fake news operation that exposed 200 million people to Russian propaganda.

“The story just collapsed one step after the next in the grandest humiliation possible,” Greenwald said after explaining The Post’s fake electric grid story.

“Boy that’s really embarrassing,” said Carlson. “I bet they must have ran a front page correction, and the editor Marty Baron must have gone on TV to apologize. Is that what happened?”

Greenwald snickered before going in on The Post for making a “second huge debacle that they’ve had in the last six weeks.” He then explained the other fake story run by the publication and said that the paper’s downplayed retraction was heard by just a “tiny fraction of the people.”

Next, the two discussed how people who are skeptical about claims that Russia hacked the election are being condemned as Russian sympathizers.

“In fact, you just heard that the report that came out today was just another set of repackaged conclusions from the Intelligence Committee, which may or may not be true, that again were completely unaccompanied by evidence,” Greenwald said, adding that casting doubts upon the report is a “basic type of skepticism” that journalists should be partaking in. “I became a journalist writing about politics in 2004, 2005 in the aftermath of the debacle of the Iraq War where, you know, people were discredited…because they were just believing whatever the government was telling them without verifying it or asking for evidence, and that led to this disastrous war that killed hundreds of thousands of people.”

Greenwald didn’t stop there, continuing, “I thought the example we were all supposed to learn from that was that we shouldn’t accept government claims unless we see evidence it’s true, particularly when the consequences are so great.”

RELATED: Tucker Carlson took it back to the 20th century with a strong criticism for the high number of liberal colleges