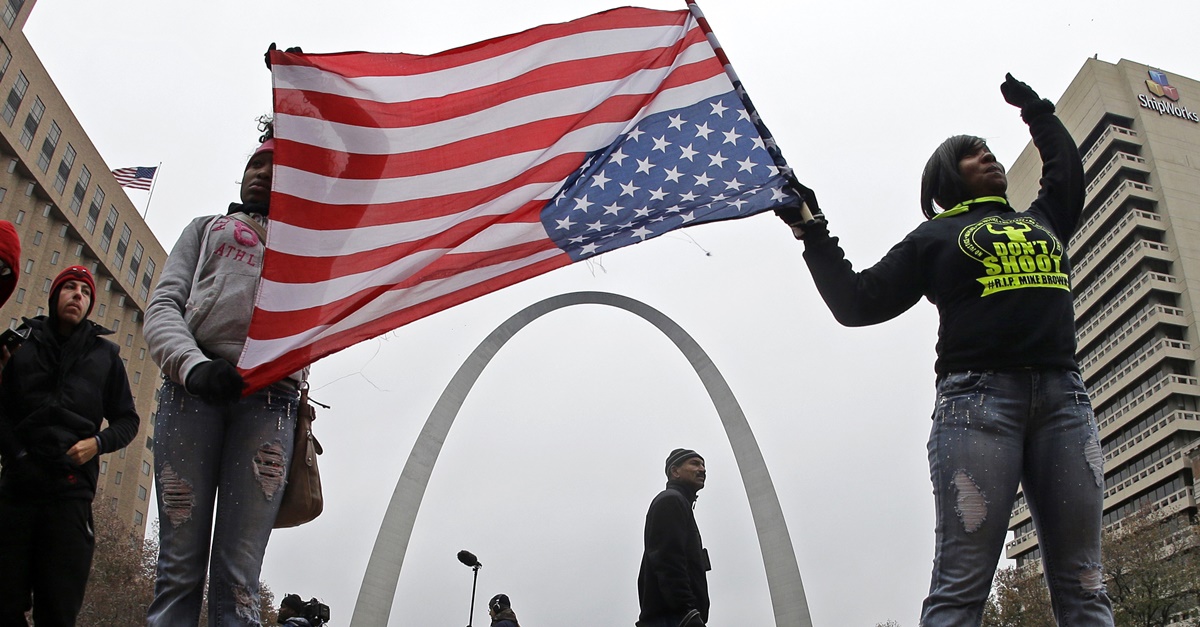 (AP Photo/Charlie Riedel)
Protesters stand in front of the Gateway Arch as they demonstrate in downtown St. Louis Wednesday, Nov. 26, 2014. Since a grand jury's decision was announced Monday night, Nov. 24, not to indict a white Ferguson, Mo., police officer who killed Michael Brown, an unarmed black teen, protesters in cities throughout the country have rallied behind the refrain "hands up, don't shoot," and drawn attention to other police killings. (AP Photo/Charlie Riedel)

The NAACP has issued a travel advisory for Missouri after the state passed what the organization is referring to as “The Jim Crow” bill and several recent instances of police brutality.

The travel ban, a first in the organization’s 108-year history, was adopted after multiple high profile instances of police brutality against minorities and the passage of a bill that will make it harder for people to sue for discrimination.

The Missouri chapter of the NAACP originally announced the travel advisory in June, and it was subsequently adopted by the national NAACP last week.

RELATED: One woman discovered that racism is still alive when her Airbnb was cancelled because she’s Asian

“The advisory is for people to be aware, and warn their families and friends and co-workers of what could happen in Missouri,” Rod Chapel, president of the Missouri chapter of the NAACP told the Kansas City Star.

He added: “People need to be ready, whether it’s bringing bail money with them, or letting relatives know they are traveling through the state.”

“You have violations of civil rights that are happening to people. They’re being pulled over because of their skin color, they’re being beaten up or killed,” Chapel said. “We are hearing complaints at a rate we haven’t heard before.”

The advisory discusses recent incidents, including the death of Tory Sanders, who died in a jail cell after running out of gas in Mississippi County, Missouri, and a hot glue gun attack on African-American teens in St. Louis.

The advisory also points to “The Jim Crow” bill which will go into effect on Aug. 28 and will force individuals to prove that race, gender or religion are “motivating” factors for the discrimination not just “contributing,” according to CBS News.