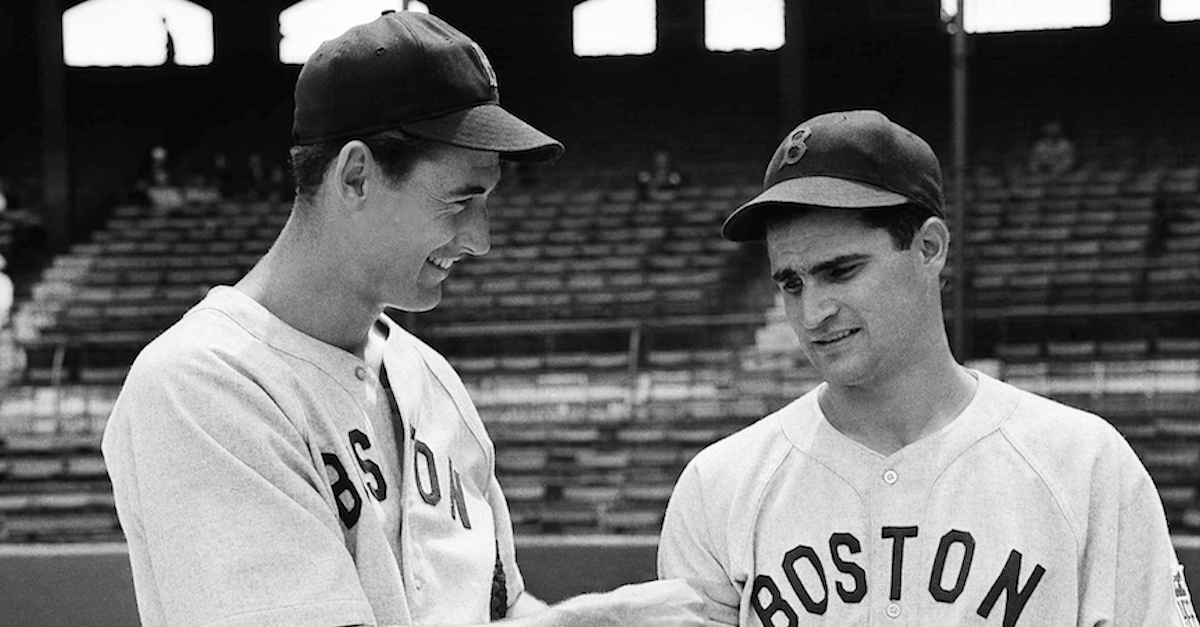 AP Photo/File
FILE - In this May 14, 1942, file photo, Boston Red Sox left fielder Ted Williams, left, tests the arm of Red Sox second baseman Bobby Doerr before their game against the White Sox, in Chicago. Doerr, a Hall of Fame second baseman who was dubbed the "silent captain" by longtime Red Sox teammate and life-long friend Ted Williams, has died. He was 99. (AP Photo/File)

Major League Baseball and the Boston Red Sox organization on Tuesday are mourning the loss of Bobby Doerr.

The Red Sox made the announcement this morning, saying Doerr was giant among baseball giants in his era, mentioning him in the same breath as Ted Williams and other Red Sox greats.

“Bobby Doerr was part of an era of baseball giants and still stood out as one himself,” Red Sox owner John Henry said. “And even with his Hall of Fame achievements at second base, his character and personality outshined it all. He will be missed.”

Red Sox chairman Tom Werner would add that Doerr “set the standard for what it means to be a good teammate through abiding friendships with Ted Williams, Johnny Pesky, and Dom Dimaggio, all while realizing legendary status on the diamond.”

#RedSox announce that @baseballhall 2B Bobby Doerr has passed away at the age of 99. #wbz pic.twitter.com/NKNL4QAmEC

Doerr lived to be 99 years old and was the oldest living baseball player. He died in Junction City, Ore.

#RedSox legend Bobby Doerr (No. 1 in right field) was oldest-living major leaguer at 99.
Passes in same year as Milt Schmidt – who was oldest living NHLer.
Both are HOFers and WWII vets. #RIP pic.twitter.com/3zJGTXbcoP

Sad news: #RedSox legend and Hall of Famer Bobby Doerr passed away yesterday. He was 99. 27 years with Boston, 14 as a player. Regarded as greatest second baseman in Sox history. Retired at 33 due to back injury. Later scouted, coached in organization. No. 1 retired in 1988.

Signed out of the old Pacific Coast League on the same scouting trip that brought Williams to Fenway Park, Doerr played 14 seasons with the Red Sox and joined his fishing buddy in the Hall of Fame in 1986. He had a .288 lifetime average, helping the Red Sox to the 1946 World Series, and in the first All-Star Game played at night he hit a three-run homer that gave the AL the lead for good.

The nine-time All-Star often forgave his more accomplished friend for his storied anger and impatience.

“Ted couldn’t understand mediocre, see. And I was in that mediocre class,” Doerr told The Associated Press on his 90th birthday in 2008, which the governor of Oregon declared Bobby Doerr Day.

Doerr’s modesty was belied by his stats: He finished with 2,042 hits, 223 home runs and 1,247 RBIs and he once went 414 games without an error — a record at the time. His six seasons with at least 100 RBIs was not matched by another second baseman for 25 years.

Forced to retire by a bad back in 1951, Doerr lived out his retirement in Oregon, which he adopted as his home after spending a winter fishing for steelhead on the Rogue River and meeting his future wife. When Doerr retired, he picked up a bamboo fly rod Williams designed and named for him — but Doerr still had to pay for it.

He was wearing a Blue Jays cap in a home videotape while debating hitting with Williams during a 1987 fishing trip. Williams maintained a batter needed to swing with a slight uppercut to squarely contact the ball on its downward angle from the pitcher’s mound; Doerr favored a level swing, convinced that the topspin put on the ball would help it carry.

The lifelong friendship between Doerr, Williams, Johnny Pesky and Dom DiMaggio was described by David Halberstam in the 2003 book “The Teammates: A Portrait of a Friendship.” A statue commemorating that friendship was unveiled at Fenway in 2010.

Doerr was the last surviving member of the group.

Except for the 1945 season, which he spent in the Navy, Doerr and his family returned from Boston every winter to the Rogue River community of Illahe, which he described as akin to turning the clock back 100 years, with cabins lit by kerosene lamps and heated by wood stoves and no indoor plumbing.

After retiring from baseball, Doerr moved his family to Junction City, his wife’s hometown, so their son, Don, could go to middle school.

“People ask, “Don’t you wish you played now,” Doerr said in 1990. “No. I know the money is better, but I just feel fortunate to have played then. I think we had more fun. We played the game hard, but there is so much pressure on these guys.”