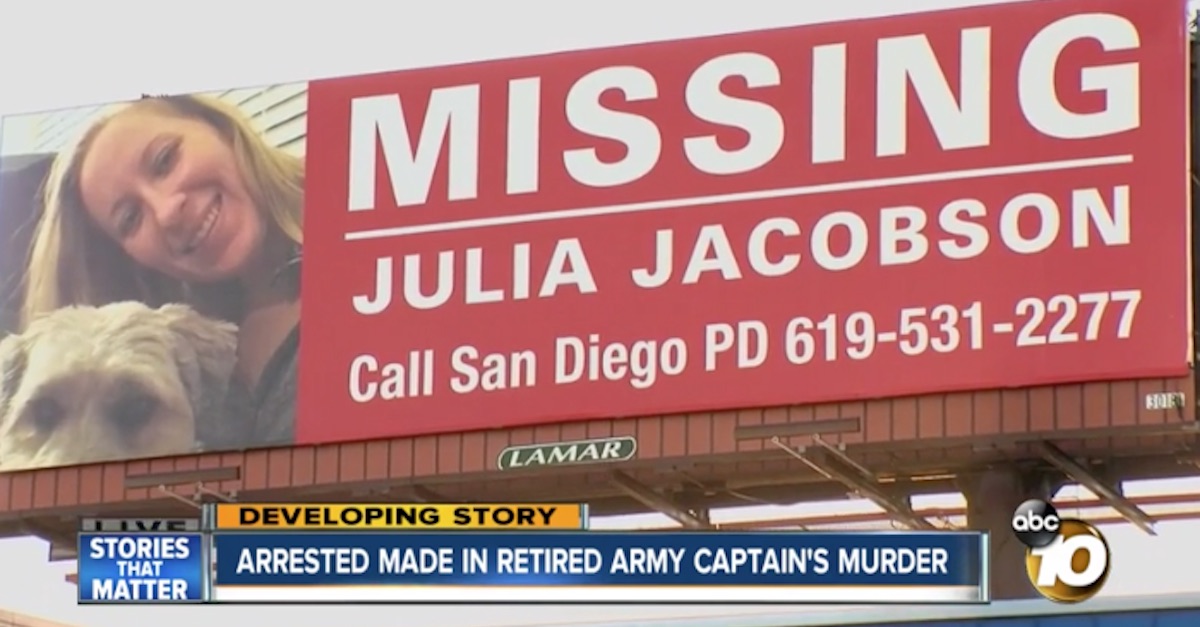 Although there had already been an arrest of her ex-husband, we now know that a retired Army captain, who had been missing since Labor Day and was presumed murdered, has been found dead in a “shallow grave” alongside her dog in a Riverside County, California, desert.

Dalen Ware, the ex-husband of Julia Jacobson, 37, has been in police custody for months and suspected of murder, but now authorities have uncovered what they believe to be the bodies of the missing woman and her dog, the San Diego Union-Tribune reported.

The publication clarified that Ware’s lawyer Steve Kline said that Ware voluntarily revealed “the place he had buried [Jacobson]” without cutting a deal.

After two days of searching the desert in Cactus City, Cpl. Fred Alvarez of the Ontario Police Department in California announced that 140-plus law enforcement found what they believed to be the bodies of Julia Jacobson and her dog Boogie based on that information.

“We used a San Bernardino County sheriff cadaver dog known as Ellie that came out to the area and found a shallow grave,” Cpl. Alvarez said, according to KCCI. “Within the grave, there were some remnants of an adult female and a dog.”

Jacobson and Ware were married in Feb. 2014 and were separated by March 2016. She was last seen on Sept. 2. Jacobson served two tours in Iraq, the New York Daily News reported.

Previously, Jacobson’s family responded on Facebook to information from police that their loved one was presumed dead.

Thank you again to all of you for the incredible outpouring of love and support that our family has received. Even though Julia’s physical presence may be gone and taken from us far too soon, her capacity for love, inspirational spirit and laughter will live forever in the hearts and minds of all those that knew and loved her. This is just the beginning of a journey of healing that will continue for the foreseeable future as we continue to seek answers in her disappearance.

“The loss of Julia is beyond words,” their heartbroken statement continued. “There will be no more birthday parties, backyard gatherings, holiday celebrations or other family activities to share. The laughter, hugs, guidance and our sense of security are forever gone and our family’s hearts will be forever broken.”

As we await the coroner’s ruling on the identification of the body, we are also still waiting to learn the motive behind Jacobson’s murder.