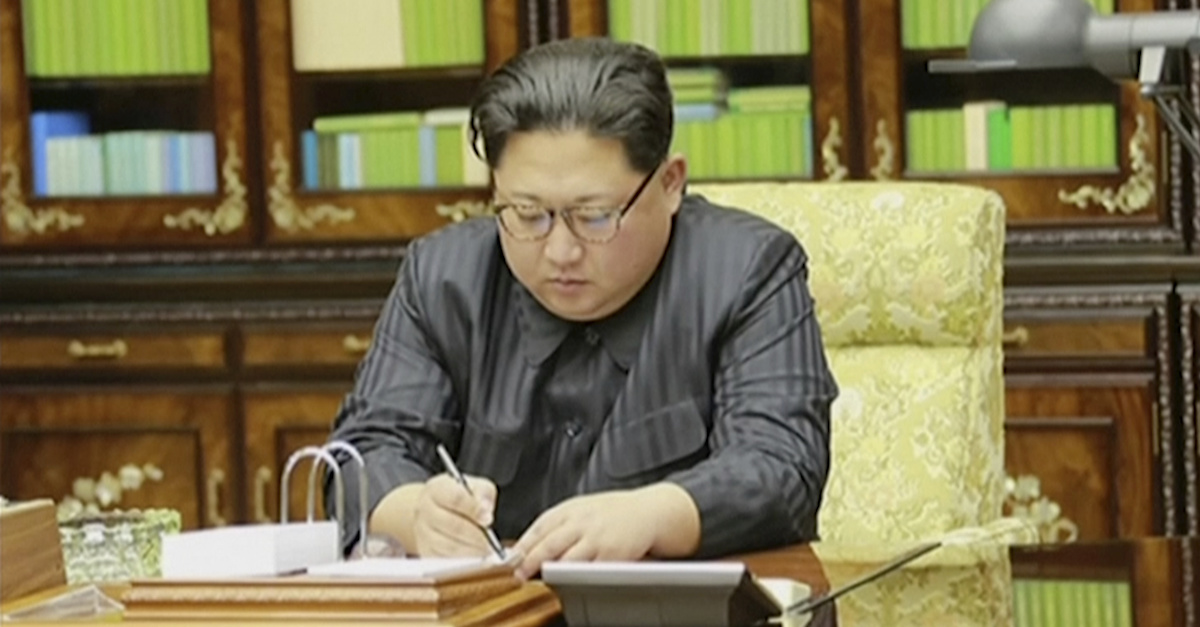 KRT via AP Video
This image made from video of a news bulletin aired by North Korea's KRT on Nov. 29, 2017, shows an image of North Korea's leader Kim Jong Un signing what is said to be a document on Nov. 28, 2017, authorizing a missile test. After two and a half months of relative peace, North Korea launched its most powerful weapon yet early Wednesday, claiming a new type of intercontinental ballistic missile that some observers believe could put Washington and the entire eastern U.S. seaboard within range. Independent journalists were not given access to cover the event depicted in this photo. (KRT via AP Video)

The state of Hawaii, starting on Dec. 1, will begin sound an alarm on the first of each month, the noise that citizens would hear in the event of incoming nuclear strike.

Civilians will hear this alarm in two 50-second blocks of time across Hawaiian islands in the Pacific, Fox News reported.

The decision was announced a day before North Korea successfully test launched an inter-continental ballistic missile (ICBM) with nuclear capability.

The Hawaii Emergency Management Agency made the announcement in a press release.

Here was the full statement:

Beginning December 1, 2017, monthly tests of the statewide warning siren system will include a newly-activated Attack Warning Tone, intended to warn Hawaii residents of an impending nuclear missile attack. In this presentation, Governor David Ige, Director of Emergency Management Major General Arthur J. Logan, and Hawaii Emergency Management Agency Administrator Vern Miyagi will present the tone and discuss the need for the warning, how it will be used, and what the agency is doing to prepare our state for a nuclear threat.

Earlier in the day, we reported on President Trump’s response to North Korea on Wednesday, namely that “major sanctions” will be imposed on Kim Jong-un’s nation today.

Yesterday, the president said of North Korea, “I will only tell you that we will take care of it.?

The New York Post quoted physicist David Wright, who estimated that the missile could have traveled 8,100 miles and would have “more than enough range to reach Washington, D.C.”

?Such a missile would have more than enough range to reach Washington, D.C., and in fact any part of the continental United States,? he said, though the U.S. Department of Defense said the missile could not threaten the U.S., its territories or its allies.

The Russian news agency Tass reported reported the Morulov said during a conference in Seoul, South Korea, that North Korea must be stopped.

?A scenario of the apocalyptic development of the situation on the Korean Peninsula exists, and we cannot turn our blind eye to it,? he said. ?I hope that a common sense, pragmatism and an instinct of self-preservation would prevail among our partners to exclude such negative scenario.”

?We have told North Korea many times that for us [its] nuclear status is unacceptable. We continue this work with the North Korean counterparts presenting to them our position,” he added.