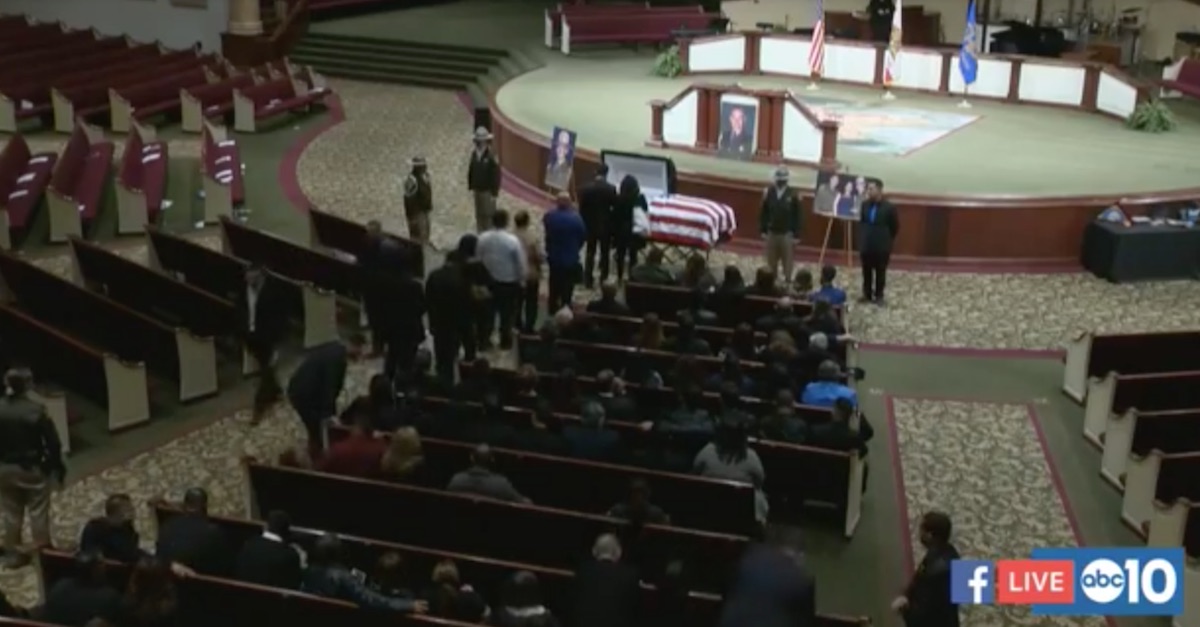 A procession, memorial ceremony and burial for the police officer, husband and father of three who was killed on Christmas Eve by a 22-year-old drunk driver took place on Saturday, and there wasn’t a dry eye in the room.

California Highway Patrol Officer Andrew Camilleri, 33, was laid to rest this afternoon in Tracy, California, where he lived with his wife Rosanna and their three children, ages 12, 6 and 2.

Family, friends and colleagues gathered Saturday at a Stockton church to remember Camilleri. Dozens of law enforcement officers saluted as a procession that included his hearse pulled up to the church.

The father of three died on Christmas Eve when a car rear-ended his stopped SUV on the shoulder of Interstate 880 in Hayward.

Camilleri had been a CHP officer since March.

His partner on the force of three months, Officer Jonathan Velasquez, broke down at the memorial service.

?I got to know a lot about Andrew and the special person he was Andrew. I know you can hear me. I love you, and it was an honor being your partner. Rest in peace, brother,” he said, tearfully.

Camilleri’s widow and 12-year-old daughter Elizabeth held each other’s hands as family and friends of their loved ones paid their respects.

Elizabeth’s emotional letter shared two days ago showed just how much she loved her dad.

Captain Tim Pearson, upon hearing the news the Camilleri’s would not return home for Christmas, remembered him as a man of integrity and courage.

“We lost not only a hero but a son, a brother, a husband and a father to a senseless act and an irresponsible decision,” he said. “Andrew was drawn to this profession due to his courage, integrity and desire to serve. Andrew was a great man who loved his job and loved his family.”

This hero didn't make it home to his three children on Christmas. Officer Andrew Camilleri, your life mattered.#BlueLivesMatter #BackTheBlue

RELATED: Watch this police officer save a dog drowning in a frozen pond

Police have set up a fund for Camilleri’s family.