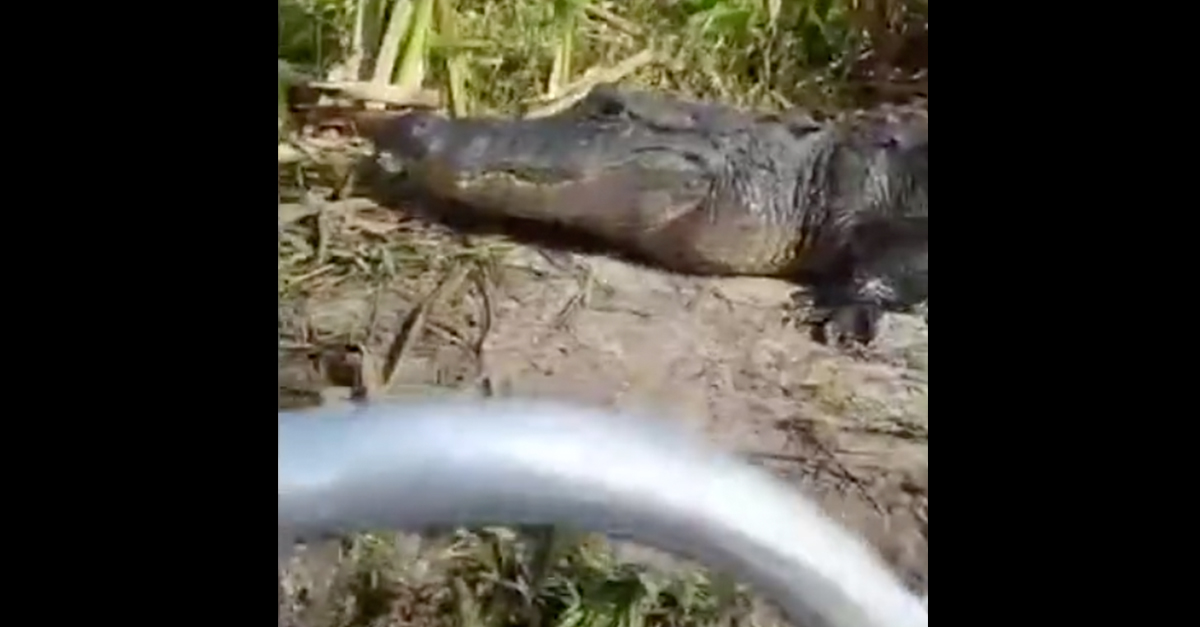 A Missouri couple shooting the breeze in Florida‘s marshes had the sort of close encounter that absolutely no one wants to have. A real big alligator went from a motionless log of a tourist attraction to pirating the boat they were taking a swamp tour on.

Worse yet, the whole thing was caught on Facebook Live when, according Fox 13, Tylor and Emerald Hindery’s tour boat got stuck in a mud bank.

The cool filming opportunity quickly turned into a nightmare. The gator, as best as gator can with its stubby legs, lunged at them and boarded the boat. The Hindery family spoke with KY3 after the harrowing incident.

“I kind of had to talk Emerald into going on it,” Tylor Hindery said. “And that’s when, boom it just happened all of the sudden.”

“At that point, it kind of, for a few seconds, was like this isn’t real life right now,” he said. “I was like, ‘Oh my goodness, I’m still alive let’s film the again.'”

Fortunately, the gator harmlessly shuffled off the other side of the boat without taking anyone down with him as a snack.

1. No one on that boat will ever move that fast again. Ever. They all would’ve beaten Usain Bolt of the blocks, that’s how quick they booked it once that gator went Jack Sparrow and boarded their vessel without permission.

2. Gators are so damn fast. It’s terrifying. And not fair. Those stupid little legs should not have that kind of power on land.

3. There’s no way, at any point during that video before the gator hopped on the boat, that I would be like, “haha wow that gator is close this is fun” like the voices in the video were acting. All I would be doing is saying, “Can we move. Please. Now. NOW. NOWWWWWWW. I’m not dying on a swamp tour Goddammit!”

This story was originally published January 20, 2017.