Pregnancy announcements and reveals come in many forms, but one woman took it too far. This gross woman decided to freeze a positive pregnancy test into a popsicle—and then fed it to her boyfriend.

Surprise! Here is some bacteria-ridden, frozen urine on a treated piece of nitrocellulose paper, Babe. And guess what, you’re stuck with me!

The woman, who goes by TikTok username @livingmermerz, posted a video of the reveal. Of course, it went viral, but not in a good way.

Seriously, it’s almost like she did this for attention. And attention is what she got, but it’s almost all negative. If this woman is for real, hopefully, the online heckling won’t affect her pregnancy too much.

“This is beautiful I’ve never seen the birth of a single mother before.”

“I will venmo this man some money to help him file for divorce.”

“Yea that’s a breakup right there.”

“How to become a single mom.”

“4:30 am…decided to go on tiktok before heading to work…..this is the first video that comes up on my fyp……So work it is….done with tiktok.”

The woman’s face is completely lit-up and she’s beaming with joy as she…maniacally?… gives her significant other the disgusting popsicle. It’s truly nasty.

Then the guy looks confused and as if he might barf. He gobbled the entire pregnancy test popsicle, down to the stick. There is not one hint of joy on his face. Can you guess why?

“Her level of cluelessness combined with her absolute joy really adds an extra level of horror,” one person commented.

Several comments discussed having seen this popsicle prank before. People are now concerned that this will become a trend, which is not okay.

“You know, you can just tell your spouse, ‘I’m pregnant’”….. one person wrote.

Ladies, please don’t do this. It’s just not right.

Read More: Women Are Asking Their Boyfriends What The Letters On Tampons Mean, And Their Guesses Are Hilarious 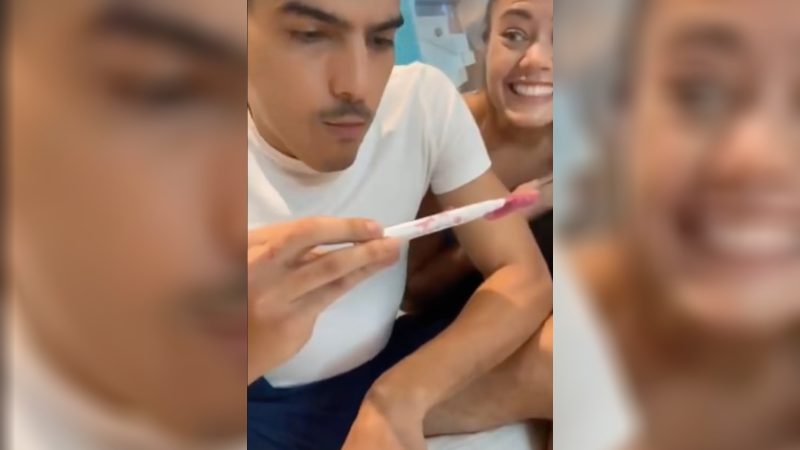