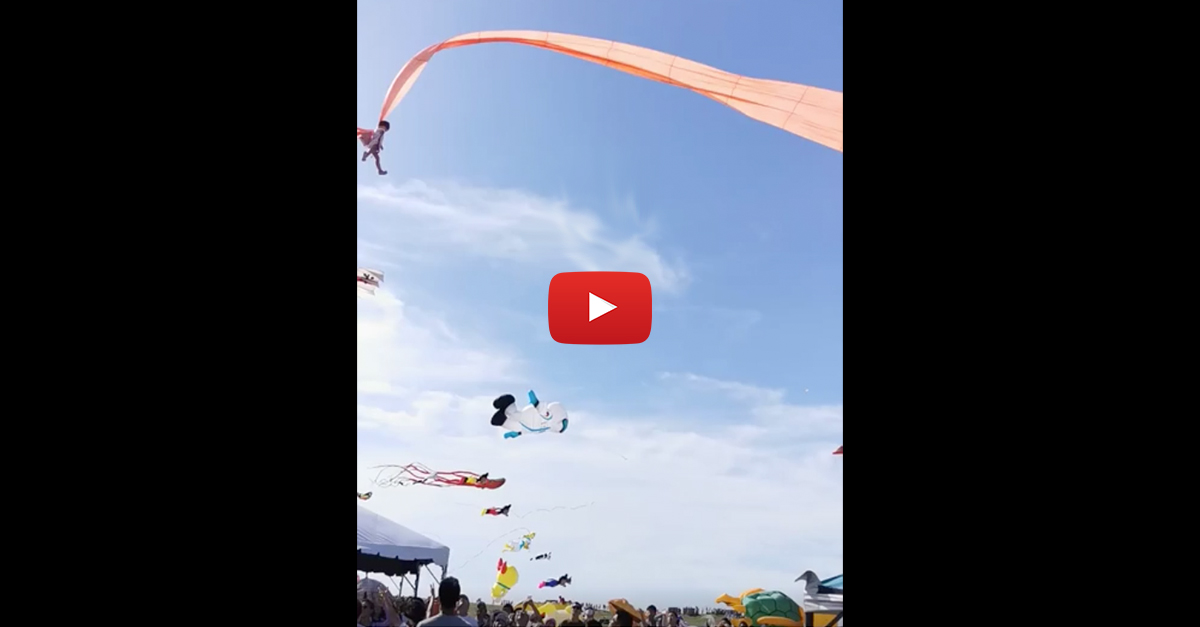 A kite-flying festival in Hsinchu, Tawain, south of the capital of Taipei, nearly turned deadly and tragic when, in a sudden freak accident, a 3-year-old became ensnared in a long, billowing kite’s tail and thrown upward into the sky, where she remained for a half-minute as onlookers below watched with helpless horror.

No one has any idea how exactly the little girl became caught in the kite’s tail, or even how close she was to the kite when it grabbed her and took her for a terrifying ride. In all the child was airborne for about 30 seconds before the kite miraculously lowered her slowly and safely back to the ground.

Several stunning videos were taken of the incident and posted online.

A Taiwanese 3-year-old got tangled up onto a kite in a level 7 wind. from PublicFreakout

3 year old girl holding on for dear life from BeAmazed

By some miracle, the child only suffered a few minor injuries — a few abrasions on her face and neck. Wind speeds at the festival were said to be stronger than usual, between 32 to 38 miles per hour.

1. This kid’s got a pretty great story to tell since she, you know, didn’t die or even get hurt really.

2. As far as parental nightmares go, this has got to be up there. Not quite “My baby fell into the tiger enclosure at the zoo” but pretty close. I can’t imagine what her mom was going through. Get that lady all the Xanax in Tawain.

3. As far as freak accidents go this has to be one of the wildest I’ve ever seen. Truly, who the hell gets ensnared in a kite tail? By the leg. I feel okay saying this since all’s well that ends well but this was some cartoon stuff. A Looney Toons accident. This is how Wile E. Coyote misses catching the Road Runner not how a toddler dies. Yikes. Thankfully everyone was safe.