When ultra-conservative, often incendiary commentator Tomi Lahren went on “The View,” she stunned her followers by announcing she is pro-choice. And she also got herself suspended from Glenn Beck’s conservative news network The Blaze.

Lahren said that being pro-life would make her a hypocrite given her support for limited government. Her comments sent shockwaves through conservative groups and, according to the Dallas Morning News,  she claims that Beck and his company launched a public smear campaign against her in retaliation.

She has sued Beck for wrongful termination, saying that she and Beck’s company should just part ways so she can move on. She remains under contract with The Blaze until September. She is still being paid.

Lahren, 24, went on ABC’s “Nightline” to discuss the stance that got her suspended, and her desire to break with Beck. She didn’t back down, saying that a person can be anti-abortion and pro-choice at the same time. “I don’t believe in abortion,” Lahren said.

She became emotional and shed tears talking about her desire to move on while joking that she is “supposed to be tough.”

“It’s my job, it’s my life. Without that, I feel lost,” Lahren said. “When your outlet is taken away from you, when your catharsis is stripped from you, and you don’t understand why and you’re so disappointed and you’re so blindsided by it, it hurts.”

Stating that she is not a feminist, Lahren said: “I will not lay down and play dead ever … because I’m not the kind of girl that sits in the corner and cries about things.”

The ordeal started when she made an appearance on the “The View” and said: “I can’t sit here and be a hypocrite and say I’m for limited government but I think the government should decide what women do with their bodies.

RELATED: Tomi Lahren explains her support of Trump despite accusations of misogyny

Criticism flowed quickly through social media, conservatives upset with her for branding them hypocrites. Lahren defended herself by saying she is an independent thinker. Her boss, Beck, questioned that claim. 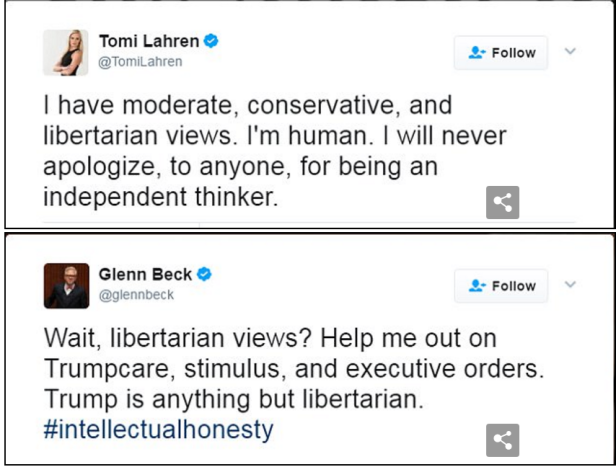 According to the lawsuit filed in Dallas County, Texas, on Friday, Lahren’s email account was shut down, supervisors stopped communicating with her, and her dressing room door was marked with yellow caution tape.

The suit also claims she was ordered to stay off social media. Social media is Lahren’s lifeblood. She has more than 4 million friends on Facebook and nearly 700,000 followers on Twitter.