NEW YORK (AP) — Cozy sweaters and soft pajamas are in for adults. Kids, meanwhile, are asking for board games featuring fake poop and pimples. Those are just some of the trends expected this holiday season, when shoppers are projected to spend as much as $720 billion, according to the National Retail Federation.

Here’s what to expect:

Blame it on holiday stress: Target, Kohl’s and other retailers are pushing “cozy” goods. That means pajamas for the family, weighted blankets, fuzzy mules and everything Sherpa — from socks to sweatshirts. “This holiday season we will see this trend in all of its furriness,” says Maria Rugolo, an apparel industry analyst for NPD Group, in a company blog .

Kohl’s is making it easy to choose soft and snuggly fashions by prominently displaying the looks near store entrances and in nearly a dozen gifting areas. Greg Revelle, Kohl’s chief marketing officer, told reporters last month that “cozy knits” was one of the most searched for terms on its website last year.

PIMPLES, POOP AND SOMETHING CUTE

In one game, called Don’t Step In It, players are blindfolded and have to avoid stepping in soft, clay-like “poop.” A unicorn version of the game features poop in bright colors. Both have been on Amazon’s list of bestselling toys. Another popular game is Pimple Pete, says Silver. Players pull, wiggle or twist out squishy “zits” from a plastic face. Losers get squirted with water.

It’s not all gross. The LOL Surprise brand is a hot seller again so far this year, according to Adobe Analytics, which tracks online spending. With LOL Surprise, kids peel each layer of a shrink-wrapped plastic ball to reveal dolls, stickers or other trinkets.

SPRUCED UP APPS AND WEBSITES

Old-guard retailers are adding some new features to their shopping apps and websites. Using Target’s app, shoppers can scan its physical toy catalog so they can find more details about the items and add them to their shopping cart.

The Kohl’s app offers the option to scan and store Kohl’s cash and redeem the store’s rewards points and gift cards in a digital wallet for easy access to checkout. Shoppers can also use the app to take photos of products and then find similar items at Kohl’s.

Walmart has been revamping its website over the past year to allow shoppers to easily discover more items. The discounter recently introduced WalmartToyLab.com, a new digital playground where shoppers can play with 20 top toys on their computer or tablet. They can also share their favorites on a digital wish list. At the store, Walmart’s app now helps shoppers find the exact location of a particular item.

The Macy’s app comes with an augmented reality feature that lets customers virtually design and experience the interior of a room. The app also lets shoppers scan items and pay with a pre-registered credit card. They then walk to a checkout counter so that a worker can verify their purchase.

Amazon and eBay are taking a page from traditional retailers and printing their own toy catalogs.

Amazon is shipping its toy book to shoppers’ mailboxes while eBay placed a shortened six-page version inside People magazine’s “Sexiest Man Alive” issue. Amazon’s will also be available at its physical bookstores, and eBay handed out a longer version at a New York pop-up shop.

One thing missing from Amazon’s toy book: prices. The online retailer tells readers to pick up a phone, open the Amazon app and take a snap of the toy to see how much it costs. Both companies are trying to make a play for former shoppers of Toys R Us, which sent holiday toy catalogs each year before shutting down this summer.

“Kids love them,” says Silver, noting how they like to circle what they want. “It’s a different experience than sitting at the computer.” 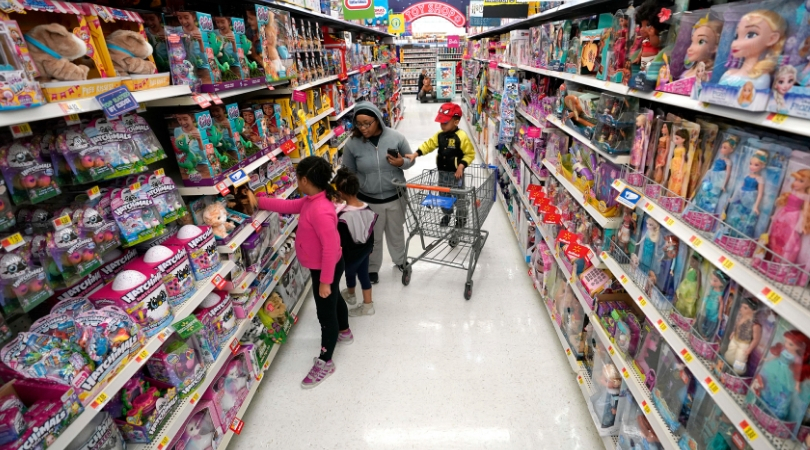