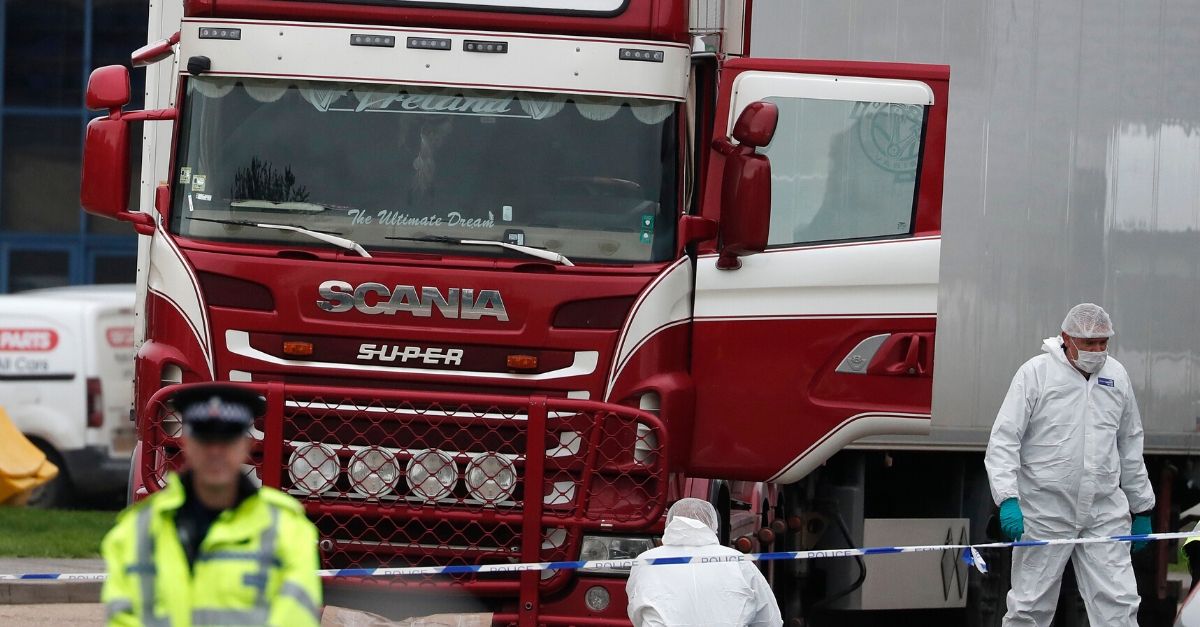 More breaking news hit, as a British investigation following the discovery of 39 Vietnamese people dead in a truck container outside London, England is coming to an end. The truck driver, Maurice Robinson, a 25-year-old from Craigavon in Northern Ireland plead guilty to manslaughter at Central London Criminal Court.

On Wednesday, Oct. 23, 2019, British police found 31 Vietnamese male and 8 female victims between the ages of 15-44 dead in the back of the truck. Coming from impoverished villages, these Vietnamese migrants died from a combination of a lack of oxygen and overheating in an enclosed space.

They were believed to have paid people smugglers to help get them abroad in search of better lives. The truck was found in the town of Grays after arriving in England on a ferry from Zeebrugge, Belgium.

The UK truck driver previously had a charge of conspiracy to assist unlawful immigration and acquiring criminal property but denied the charge of transferring criminal property. Prosecutor William Emlyn Jones QC said that Robinson will not have a human trafficking conspiracy charge, but there are also other people who have been charged in connection with this case. He appeared in court via video link with 4 other co-defendants.

FROM EARLIER: A man's pleaded guilty to the manslaughter of 39 Vietnamese nationals found dead in the back of a lorry near the #DartfordCrossing in Essex #kmfmnews https://t.co/S7W3FeqO9C https://t.co/RY1qwKjGDY pic.twitter.com/fzEKxpAkEH

Another co-defendant, Valentin Calota from Cossington Road, Birmingham, was charged for unlawful immigration in connection with the case. Eamonn Harrison, a 23-year-old from Mayobridge in County Down, Northern Ireland, is wanted in England on charges of human trafficking, unlawful immigration, and 39 counts of manslaughter. Harrison drove the originally refrigerated container to the port of Zeebrugge in Belgium, later signing its shipping notice. A 38-year-old man and woman from Warrington in England and a 48-year-old man from Northern Ireland were also arrested on suspicion of conspiracy to traffic people and 39 counts of manslaughter.

16 out of the 39 victims have been identified, their bodies given back to their families. British authorities say that this is the largest mass fatality victim identification process in the history of police department. To find a large number of dead bodies is heartbreaking in all circumstances. And to find Vietnamese migrants in the back of the truck, far from home in search for a better life is even worse.

It’s unclear what intentions these people smugglers had, but to be honest, it doesn’t sound like they had the well-being of these Vietnamese people at heart. British authorities also mentioned that this is one of the worst human-smuggling cases in England’s history. Unfortunately, however, finding a large number of bodies associated with truck deaths and people smugglers are not uncommon. According to NBC News, 58 Chinese people were found dead in a tomato truck at the English port of Dover in 2000, and 71 Afghan, Syrian, and Iraqi people were found in a truck in Austria in 2015.

We can only hope that times will get better. But first, let’s hope that justice will properly be served.