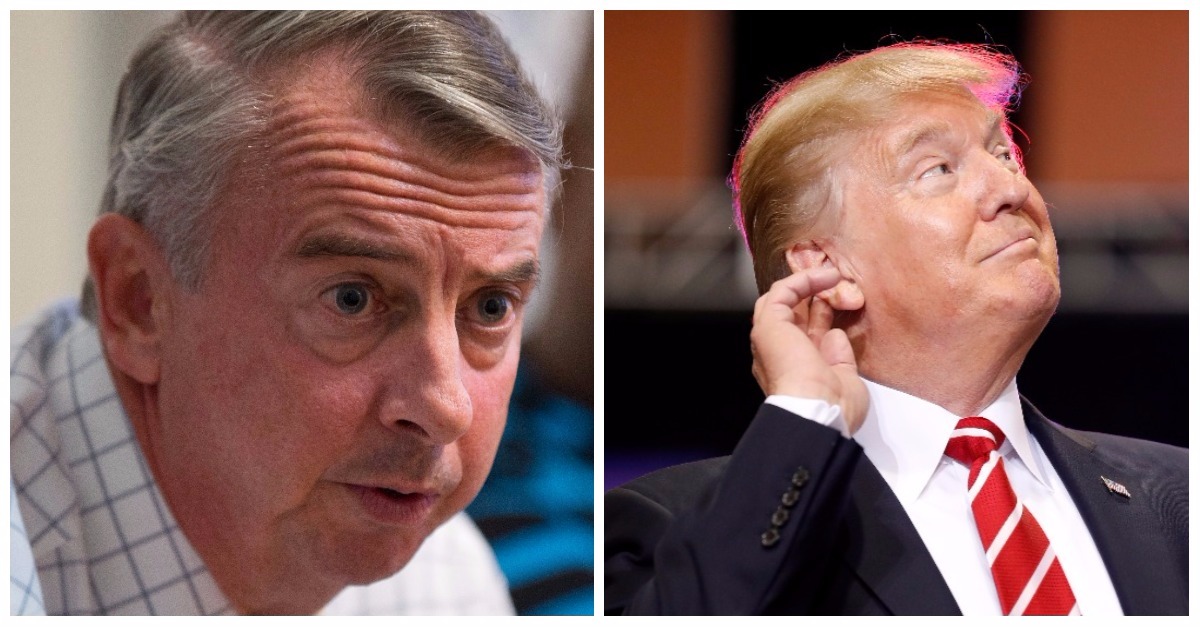 AP Photo/Steve Helber, File, AP Photo/Alex Brandon
FILE - In this Wednesday, Aug. 30, 2017, file photo,Republican Gubernatorial candidate Ed Gillespie talks with a group of recovering addicts at the Recovery House in Richmond, Va. The closely watched race for Virginia governor is ramping up for the post Labor Day push when voters typically start to pay more attention. But the two major party candidates, Northam and Republican Ed Gillespie, are still trying to feel their way with President Donald Trump in the White House. (AP Photo/Steve Helber, File), President Donald Trump reacts to the song as he arrives at a rally at the Phoenix Convention Center, Tuesday, Aug. 22, 2017, in Phoenix. (AP Photo/Alex Brandon)

Republican gubernatorial candidate Ed Gillespie was soundly beaten in the state of Virginia on Tuesday night by Ralph Northam, and President Donald Trump wasted no time throwing Gillespie under the bus on the same day he had urged voters to turn out for him.

Ed Gillespie worked hard but did not embrace me or what I stand for. Don’t forget, Republicans won 4 out of 4 House seats, and with the economy doing record numbers, we will continue to win, even bigger than before!

“Ed Gillespie worked hard but did not embrace me or what I stand for,” Trump tweeted, distancing himself from a failed candidate.

That same morning, Trump tweeted that “MS-13 and crime will be gone” because of Gillespie and said, “Vote today, ASAP!”

.@EdWGillespie will totally turn around the high crime and poor economic performance of VA. MS-13 and crime will be gone. Vote today, ASAP!

But major salt in the wound for Gillespie came from an unlikely source, as a seemingly innocuous photo of a father and son at a watch party for the Republican was summarily mocked by the internet.

RELATED: Jon Stewart turned a veterans event into a “d**k” joke about Trump

An hour after Trump’s tweet last night, Politico tweeted a photo of a father “consol[ing]” his cheese-eating, MAGA-hat-wearing, Gillespie-campaign-stickered son by patting him on his shoulders.

A father consoles his son at a watch party for Ed Gillespie, who lost the Virginia governor's race to Ralph Northam https://t.co/H4k2nkcyMr pic.twitter.com/XLQlDnvIwL

The internet response to this was not very nice.

Fixed the photo for you! pic.twitter.com/KpexoOPCPq

"There, there, son. We'll go home and I'll put on some Duck Dynasty and you can stay up extra-late reading Atlas Shrugged, if it'll make you feel better. How about that, champ?"

“It’ll be alright son, we’ll just have to find someone else to transfer all of our wealth into the hands of the 1%.”

Cheer up Billy, there’s a Klan rally we can go to this weekend.

Who knows what he's been told. Probably thinks Dems are going to force him to have a sex change and join MS-13.

Northam’s victory set off overnight recriminations and finger-pointing among Trump’s hardcore supporters. The pro-Trump website Breitbart News, which had earlier praised Gillespie as a “culture warrior,” derided him as a “Republican swamp thing.” Jerry Falwell Jr., president of Liberty University, said Northern Virginia’s voter-rich liberal suburbs should be annexed by the District of Columbia, “to return the governance of [Virginia] to Virginians.”