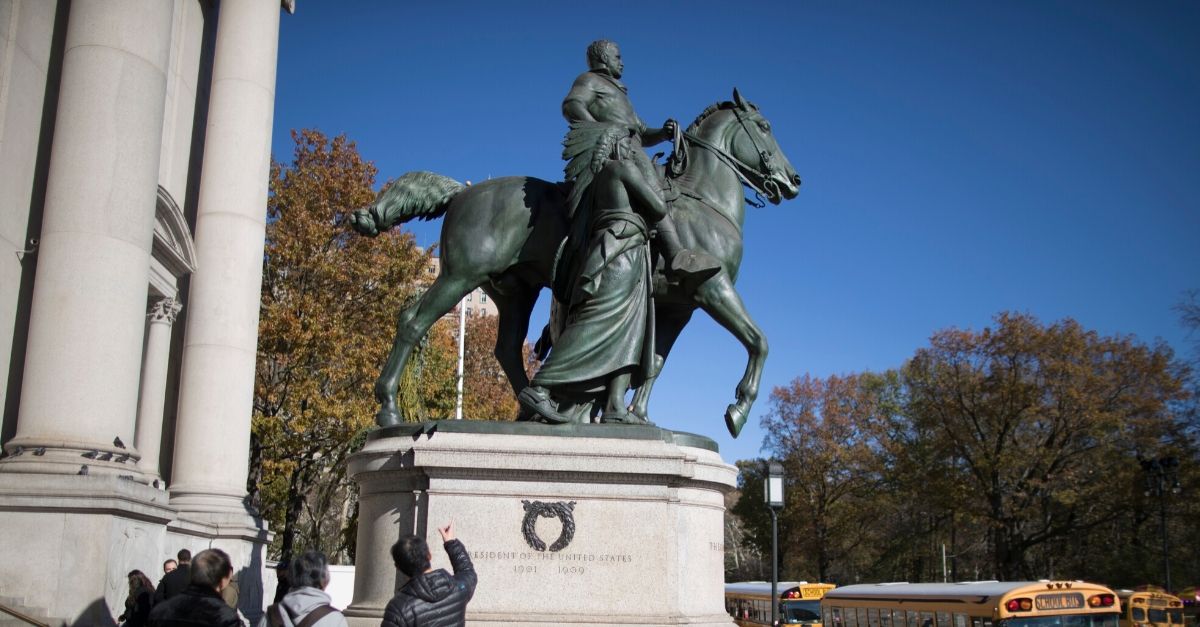 Yikes! President Donald Trump is currently under fire after stating he does not support the removal of a Theodore Roosevelt statue that has been criticized for “exemplifying racially insensitive iconography.” The 45th president spoke out against the decision to remove the 26th president sculpture that is located at the American Museum of Natural History in New York City.

The 74-year-old tweeted, “Ridiculous, don’t do it!” The removal of the statue comes as many decades-old monuments across the country are being torn down, or questioned amid the ongoing protest against systemic racism and police brutality after the death of George Floyd.

The agreement to remove the Roosevelt statue, which is located at the entrance, came after years of complaints about its depiction, which shows the former United States president on the horseback with a Native American man, and an African man trailing behind him on either side.

Ridiculous, don’t do it! https://t.co/VYez8p9AJh

The Museum’s president, Ellen Futter, stated that the statue’s “hierarchical composition” is the reason why they are removing it. She noted, “Over the last few weeks, our museum community has been profoundly moved by the ever-widening movement for racial justice that has emerged after the killing of George Floyd. We have watched as the attention of the world and the country has increasingly turned to statues as powerful and hurtful symbols of systemic racism.”

New York City Mayor Bill de Blasio supported the removal of the statue, releasing a statement saying that it was the right decision. He stated the museum has asked to remove the statue due to its explicit depiction of black and indigenous people as subjugated and racially inferior. He noted, “The City supports the Museum’s request. It is the right decision and the right time to remove this problematic statue.”

It is absolutely not ridiculous to remove the Teddy Roosevelt statue from the outside of the natural history museum. And it has nothing to do with Teddy Roosevelt, who was a progressive President for his time. Take a look at the actual statue itself. It is just so degrading. pic.twitter.com/sWzutPmsAT

This isn’t the first time the statue makes headlines. Back in 2017, several protesters covered the statue with red liquid to represent blood. Protesters stated the statue symbolizes “patriarchy, white supremacy, and settler-colonialism.” Theodore Roosevelt IV, a great-grandson of Roosevelt and a member of the Museum’s Board of Trustees, issued a statement supporting the removal saying that it was officially time to move forward. The statement read,

“The world does not need statues, relics of another age, that reflect neither the values of the person they intend to honor nor the values of equality and justice. The composition of the Equestrian Statue does not reflect Theodore Roosevelt’s legacy. It is time to move the Statue and move forward.”

The details of when the removal will happen and whether the will be replaced have not yet been released.