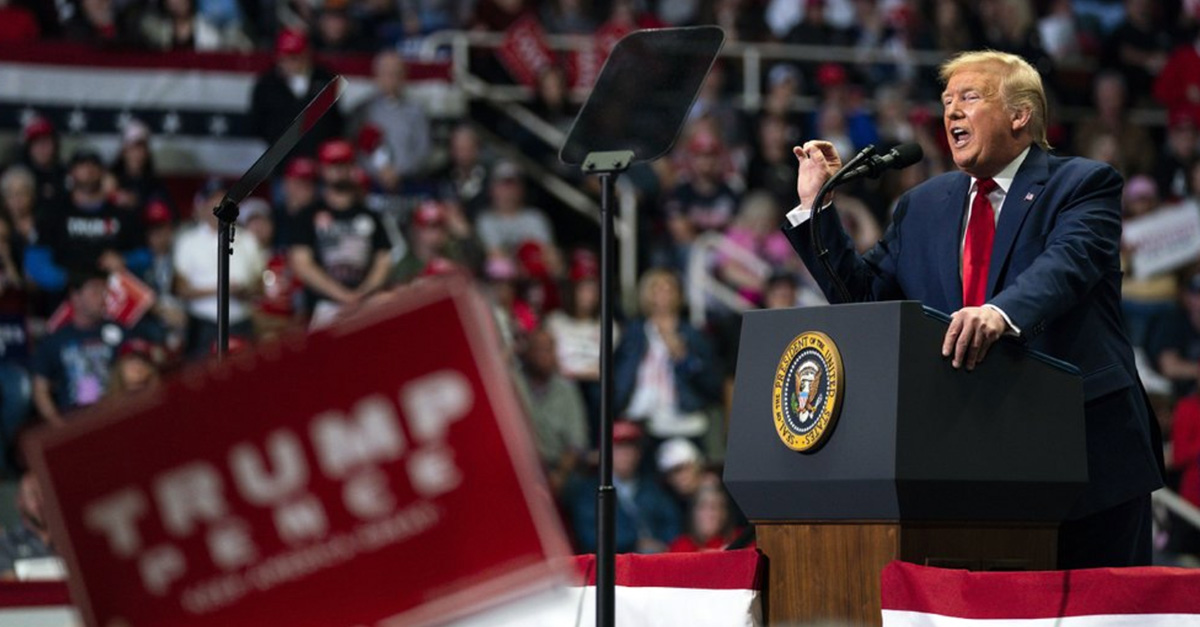 During times of war and strife, national leaders often aim to unite a broken country and, in the process, broaden their appeal beyond their most loyal supporters. Not President Donald Trump.

Confronting a pandemic that has upended his presidency and threatened his reelection prospects, Trump has focused almost exclusively on tending to his base.

While the coronavirus has claimed the lives of more than 54,000 Americans, eliminated more than 20 million jobs and dashed the routines of daily life for nearly everyone, Trump has leveled attacks on Democrats. He’s blamed former President Barack Obama’s team for his own administration’s failures, picked fights with reporters and thrown rhetorical bombs meant to thrill his hardcore supporters.

During a particularly rough stretch last week, Trump pledged to bar foreigners from entering the country. The executive order Trump ultimately signed was less severe than he suggested, but it still gave him a chance to highlight action on an issue that’s central to his political brand.

Four years after Trump captured the White House by perfectly threading narrow victories in critical battleground states, he is betting that a relentless focus on his base will yield a repeat performance. It’s a risky strategy because Trump’s standing in some of those states shows signs of weakening. And there’s little evidence to suggest he has significantly broadened his appeal in other places to offset those vulnerabilities.

The pandemic hasn’t changed that.

“It drives me crazy, frankly, because part of being the president is to rise above, to ignore certain things,” said Ari Fleischer, who served as White House press secretary under President George W. Bush, whose lukewarm approval ratings soared after his handling of the Sept. 11 attacks. “And I think at a time like this he should leave a lot of the gauntlets on the ground and rise above. But that’s not him.”

Fleischer said that, while the virus puts limits on the president’s ability to travel and the political environment is far more polarized today than it was in the early 2000s, Trump’s White House could be appealing to the country as a whole with events honoring doctors, nurses and front-line workers that “send helpful, meaningful signals that we are one nation and we can play a meaningful part.”

Other modern presidents have looked to transcend partisan boundaries at a time of crisis or tragedy, including Bill Clinton in the aftermath of the Oklahoma City bombing, Ronald Reagan after the Challenger space shuttle explosion and Lyndon Johnson after John F. Kennedy’s assassination.

Other Republicans, however, believe Trump is playing it right. Stephen Bannon, the president’s former chief strategist, believes 2020 is a “base election” year and thinks Trump can broaden his support because of a “new nationalism” born in the wake of a pandemic that began in China. He predicted Americans would rally around their president during a period of crisis.

Trump’s approval rating has remained remarkably steady over the course of his presidency, with about 42% of poll respondents saying they approve of the job he’s doing as president, according to a new The Associated Press-NORC Center for Public Affairs Research. That’s even as many question the veracity of his statements and believe he is not listening to health experts enough during the crisis.

But the coronavirus has threatened to rewrite the Electoral College map, and Trump’s campaign has become concerned about losing support in several key swing states, particularly Florida and Wisconsin. Some advisers have all but written off Michigan, which Trump captured in 2016 by fewer than 11,000 votes. He is now locked in a feud with the state’s Democratic governor.

In former Vice President Joe Biden, Trump faces a presumptive Democratic nominee whose promises of across-the-aisle outreach and pragmatic, experienced-based management may play well in several battlegrounds states. That includes Arizona, which has a vast suburban population uneasy with the constant Trump drama, tweets and base plays.

“People are going to look for stability,” said Doug Cole, a veteran Republican operative in Arizona who worked on John McCain’s 2008 presidential campaign. “Biden can capitalize on that.”

Trump campaign officials who requested anonymity to describe campaign strategy stressed that the election is still six months away, an eternity in politics. They noted polls can be wrong or change, especially if the pandemic wanes or the economy rebounds. And they said the campaign believes that voters will credit Trump for the strong economy before the pandemic hit, even as they have expressed worry that he could be pushing to open things too quickly and that any resulting deaths will not be forgiven by voters in November.

But there are warning signs. Several Republicans who mimicked Trump’s 2016 strategy by focusing on immigration failed to win congressional or governors’ races.

“Whatever impact it has in boosting turnout among core supporters, it boosts the backlash vote even more,” said Frank Sharry, the executive director of the liberal immigration advocacy group America’s Voice.

He noted the 2017 Virginia’s governor’s race, in which GOP nominee Ed Gillespie tried to feather candidate Ralph Northam with ads on immigration. The strategy backfired, as it did in many 2018 midterm races.

Jason Miller, communications director for Trump’s 2016 campaign, countered that last week’s immigration executive order may appeal to the base. But he said it was also aimed at helping African Americans, Hispanics, women and immigrants already in the U.S. legally who typically hold lower-wage jobs at a higher percentage than those in what is typically viewed as the president’s base.

Trump’s campaign has been trying to chip away at Democrats’ advantage with those demographic groups, even as advocates counter that minority immigrants will suffer by being prevented from having their parents and other family members join them in the country.

Miller also defended the president’s refusal to put petty political riffs aside at a time of national crisis, arguing that some fights are worth picking and that Trump will be judged, not on his daily briefings, but on how the country eventually recovers from the crisis.

“He is bringing the country together with determinative action and results,” he said.

About the author: Jill Colvin
Jill Colvin is a reporter with the Associated Press.
View More Articles