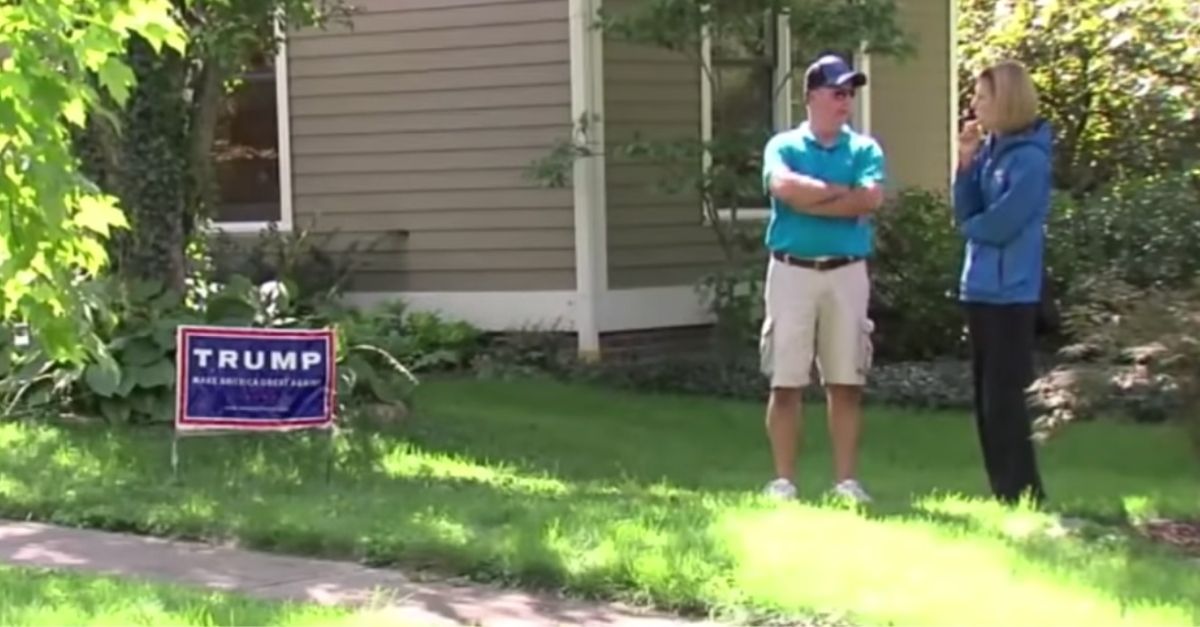 A President Donald Trump supporter decided to take matters into his own hands by implementing extreme measures to protect his Trump 2020 yard sign after several of them were stolen from his front lawn. What did this man do? He decided to surround the sign with a 3.5 foot high triangular electric wire fence. You know, the normal thing one does to avoid people from stealing.

According to the Massachusetts man, who is a member of the New Bedford School Committee in New Bedford, he was a formerly life long Democrat, recently turning into a Republican to show support for the president. 54-year-old John Oliveira stated his previous Trump signs, which were a total of six, disappeared from his lawn out of the nowhere. Two police reports later, the Trump supporter had enough and came up with a plan.

Oliveira, who is a 20-year-old Navy veteran, stated, “It’s a shame that I have to do this. I believe in the president. Obviously, people didn’t like that…Our country is about different opinions and being able to voice those opinions in a fair and equitable manner, and when you’re taking people’s signs, that’s not fair and equitable. You have to be able to respect each other because we’ll never get anything accomplished if you don’t. Don’t mess with my right to free speech.”

The owner said all he is trying to do by putting up the sign is to show the people what political party he believes in. He noted, “The electric fence is a deterrent. Horse wire carries a charge. It will certainly send a message.” It has been two weeks since the electric wire fence went up, and the sign has reportedly stood its ground. The other lawn signs on his front yard that read “Voice Your Vote. Vote New Bedford”  and “Keep America Great Again” have apparently never been touched. Surrounding one of the signs is an electric wire fence with another message in big font size telling people in Spanish, English, and in French, “Warning. Electric Fence.”

My friend in Mechanicsville had his Biden sign stolen yesterday. Told him to do the same thing

As far as the legality of any electric fencing in a residential area is Massachusetts depends on the regulations and laws of the community. If someone, or their pet, is hurt by the electric fence, it could lead to legal trouble. According to Fox News, this isn’t the first time Oliveria makes local headlines.

Last year, he was repeatedly caught using profanity and flipping off fellow school committee members during meetings. He told the local news outlet, South Coast Today, that he suffered from post-traumatic stress disorder from two combat tours in Afghanistan and Iraq, but wouldn’t apologize for his behavior. The pro-Trump supporter argued he ran for the committee on a platform and had dedicated his time to break the status quo by holding politicians accountable.