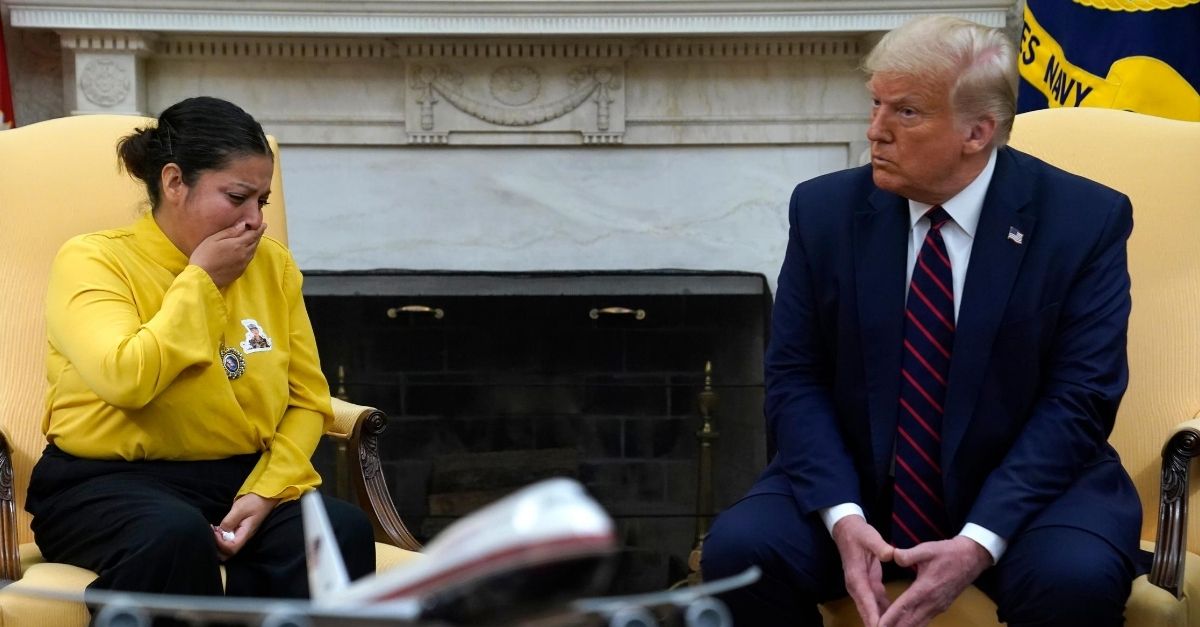 The mother of PFC. Fort Hood soldier Vanessa Guillen pleaded President Donald Trump for justice for her daughter, who was killed at Fort Hood earlier this year. Guillen spoke through an interpreter at the Oval Office, asking Trump to help their family investigate the death of Guillen. The soldiers were bludgeoned to death with a hammer in the Texas base where she worked. Her family stated she was going to file a sexual harassment report against her alleged killer, who was a fellow soldier at Fort Hood.

The interpreter for Gloria Guillen told Trump at the White House, “She wants to know who’s really responsible. Her daughter died. Her daughter died in service of her country at the hand of people who are in the military.” The president responded to the mother, calling Vanessa a, “spectacular person, respected and loved by everybody, including in the military.” Speaking with Guillen’s mother, father, and two sisters, the president noted, “As you know, the FBI and the DOJ are now involved. We got them involved. And people at Fort Hood, where it took place, are very much involved. We didn’t want to have this swept under the rug, which could happen.”

Family attorney Natalie Khawam detailed the brutal and gruesome aspects of the crime to the President. She noted the killer took a hammer “killed her and, in the room, bludgeoned her to death. “How no one heard her screaming, how no one saw the blood, those are … questions we still have.” Khawam noted that the suspect then used a machete to cut her up alongside his girlfriend, and attempted to burn her body.

20-year-old Spc. Aaron Robinson, who is suspected in Guillen’s disappearance at the military base, killed himself after police had confronted him in Killeen, Texas, earlier this month. The US Army released the names of five civilians, one of whom is a former marine, who will now receive the “command climate and culture at Fort Hood.”

The review is intended to determine whether that culture and climate reflect “the Army’s values, including safety, respect, inclusiveness, and a commitment to diversity and workplaces and communities free from sexual harassment.” Guillen’s family believed there was no transparency between them and the Army, believing there was an actual cover-up after her death. Guillen’s sister told the president that although she respected the military, there was no respect when it came to the way they treated Vanessa or them. Khawam explained that the soldier was afraid to report the sexual harassment from Robinson since they were within her chain of command. The family pushed Trump not only for justice for the fallen soldier but for an overall change to military culture and how one can report sexual harassment.

The family of slain Fort Hood soldier Vanessa Guillen is expected to meet with Trump to discuss a sex-misconduct bill named after her.

The #IAmVanessaGuillen bill aims to facilitate members of the military to report sexual harassment and assault.https://t.co/WWnz3oThe4

The Guillen Family was in Washington, D.C to show support for the #IAmVanessaGuillen bill, which would allow any active duty service member to file sexual harassment claimed through an independent party. After they spoke with the president, Trump quickly responded, “You have our support, and we’re working on it already, as you know, and we won’t stop, and hopefully something very positive will come out in honor of your sister.” The president also noted “they” were going to look into the bill.

After hearing that the family had not received Guillen’s remains due to the investigation still being open, Trump offered to help by covering all funeral costs. He stated, “If I can help you out with the funeral I’ll help you out. I’ll help you out financially. I don’t even know if you need help. I just think it’s a horrific thing that happened.”