Tucker Carlson’s show on Fox News has taken on the feel of WWE: Each episode presents a confrontation with plenty of showmanship and the potential for things to really get explosive. And recently, Tucker’s opponents are bringing the fight to him.

It happened again Wednesday night when guest Max Boot, a Council on Foreign Relations senior fellow and lifelong Republican, came on the show on the heels of Tuesday’s high-intensity segment with guest Retired Colonel Ralph Peters, who blasted Carlson for sounding “like Charles Lindbergh in 1938” — in other words, comparing Tucker to a Nazi sympathizer.

Boot took to Twitter about the encounter, writing, “Ralph speaks truth to a ratings powerhouse.”

Ralph Peters to Tucker Carlson: "You sound like Charles Lindbergh in 1938." Ralph speaks truth to a ratings powerhouse. https://t.co/4sGJwGC0Wm

Tucker, who inherited his ratings powerhouse position from disgraced conservative commentator Bill O’Reilly, lashed out at Boot for agreeing with the Nazi sympathizer insult and referred to Boot as a “self-described genius.”

Boot told Carlson to rest assured, “I’m not saying that you are a Nazi sympathizer.”

Boot then told the combative Carlson that he had been “very disturbed” to see Carlson and Mark Steyn, a writer and Rush Limbaugh guest host, “yukking it up over the fact that Putin is interfering and meddling in our election process.”

RELATED: Tucker Carlson criticizes the media’s reaction to Trump’s tweets but reveals why the president’s comments were a mistake

Carlson then went on offense, insulting Boot by telling him it is “immoral” to dismiss people who disagree with him, claiming it was a habit of Boot’s. Carlson said, “It’s a kind of moral preening, and it’s a little odd coming from you, who has been consistently wrong in the most flagrant and flamboyant way for over a decade.”

Of course, Boot responded by asking what he’s been wrong about, and then responded to Carlson’s response by saying, “I would be happy to hold up my record of foreign policy against yours. By the way, to underline the fact, you supported the Iraq War, and then when it went bad, you opposed it. It doesn’t take any moral courage or perspicacity.”

RELATED: A college professor who pulled the “white privilege” card in an infamous Tucker Carlson interview just got her card pulled in return

Then came a rat-tat-tat exchange:

“Tucker, save your sarcasm,” Boot replied.

“No, it’s heartfelt. It’s not sarcasm. I have contempt for your non-argument,” Carlson said.

Then came another exchange over Syria:

“Russia is trying to further the murderous Assad regime,” Boot said. “And Russia is undermining our electoral process, which you don’t seem to care about.”

“The moral preenings and the generalizations are tiresome,” Carlson retorted.

“Your lack of moral judgment is tiresome to me. I find it to be offensive,” Boot said.

“This is why no one takes you seriously,” Carlson shot back.

One might wonder why Carlson would want a guest on his show whom he believes nobody takes seriously, but it certainly makes for engaging TV. 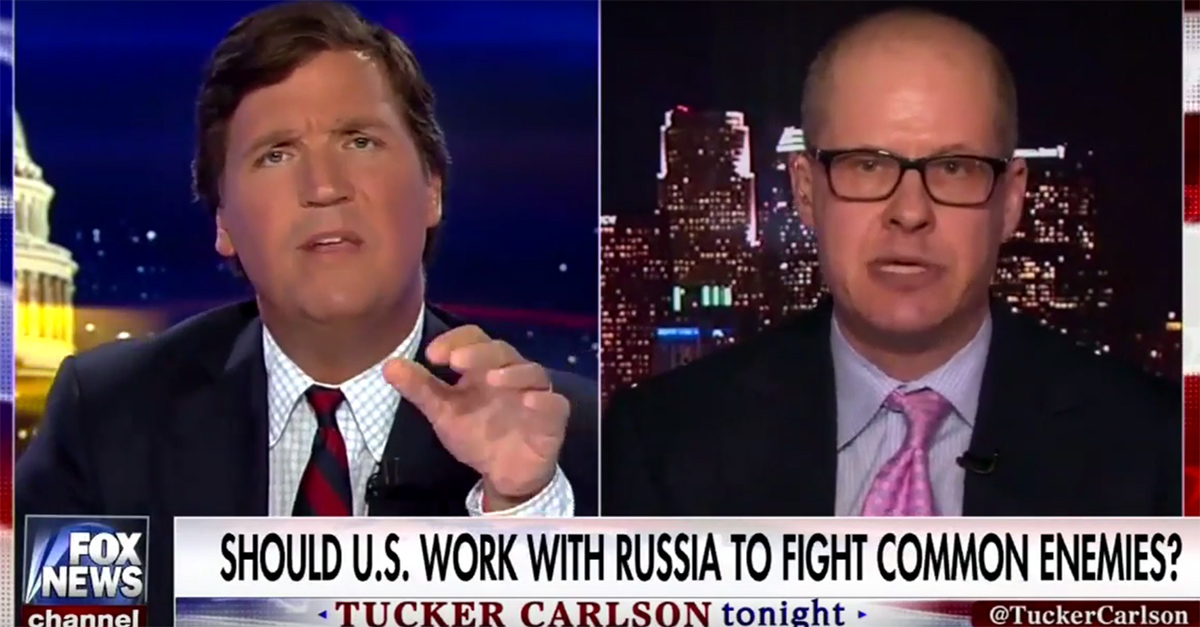