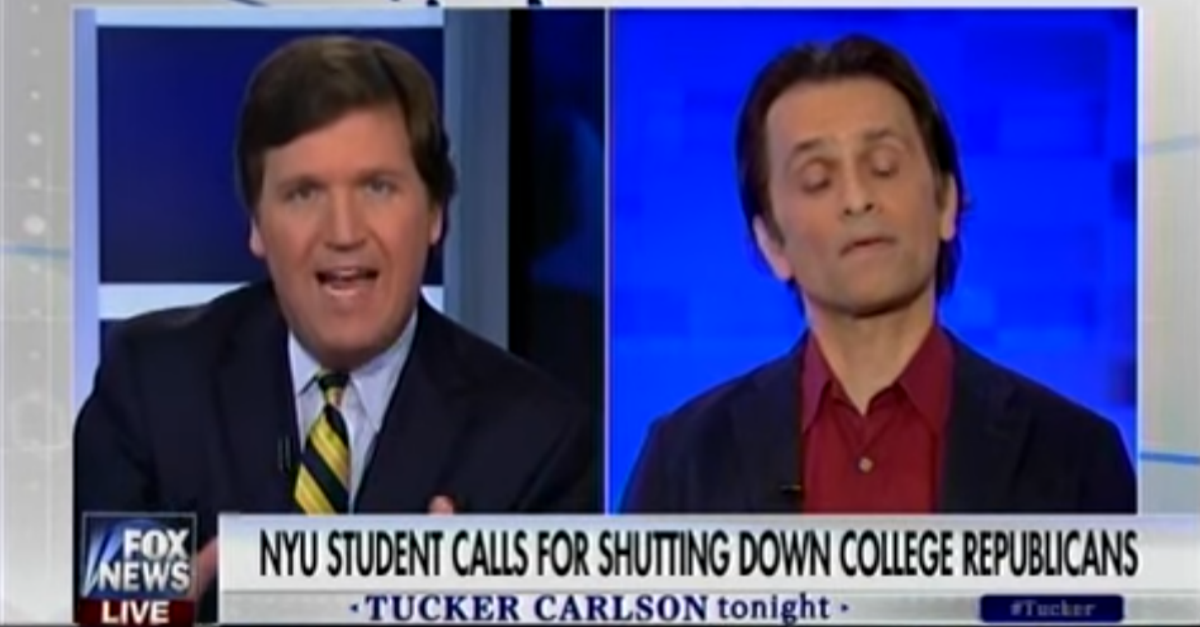 Tucker Carlson is probably the third most popular right-leaning pundit after Bill O’Reilly and Sean Hannity. And like his fellow Fox News commentators, Carlson regularly invites people that he knows will disagree with him. On Friday night, Carlson hosted New York University graduate student Kouross Esmaeli to talk about a recent op-ed that the student wrote in the school newspaper where he declared that “NYU should shut down the College Republicans.”

At the heart of his argument, Esmaeli was blaming College Republicans for inviting conservative speaker Gavin McInnes to campus. He claimed that McInnes “advocates for violence against transsexuals and gays, likened an African-American celebrity to a monkey and organized a vigilante group dedicated to white male supremacy.”

When he appeared on “Tucker Carlson Tonight,” the graduate student seemed to be very cautious about engaging in a discussion until he had framed his argument. Esmaeli seemingly did not want to talk about McInnes at all, but rather, repeatedly asked Carlson, who is a vocal free speech advocate, if “people should be able to recruit for al-Qaeda on a college campus.”

RELATED: Tucker Carlson reacts to President Obama’s farewell speech and wonders what is to come

The Fox host referenced the 1969 Supreme Court case of Brandenburg vs. Ohio where the court upheld that free speech, even if inflammatory, cannot be punished. Esmaeli tried to argue that McInnes’ statements were too far beyond-the-pale. And Carlson stated that while he cannot defend some of the statements that his fellow pundit has made, he respects his right, and the rights of people who disagree with him, to express an opinion.