Two men responded to getting pulled over with an armed trip to the police station, and it didn’t end well 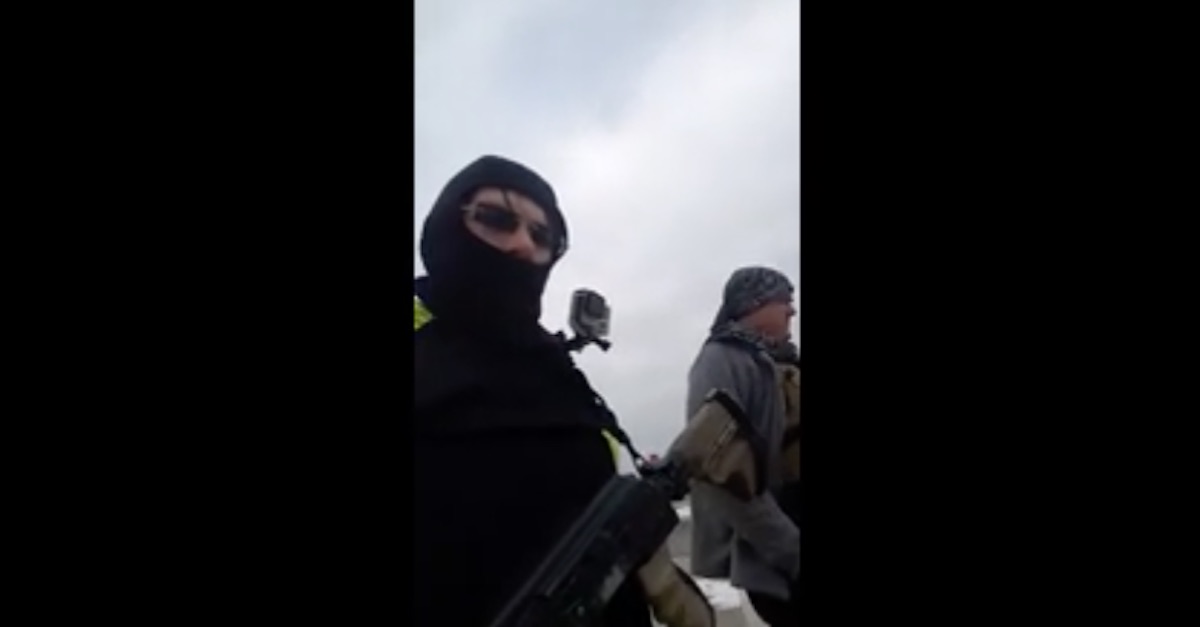 Two men who were not pleased about getting pulled over by the police in Michigan reacted an hour later by showing up at the police station with masks and guns to “file a complaint.”

James Baker, 24, and his friend Brandon Vreeland, 40, were immediately commanded to drop their weapons — a rifle and a handgun — during a brief but intense standoff.

“We felt a little afraid for our lives when we were pulled over,” Baker said as they entered the building.  “So we figure we better protect ourselves.”

“Put it on the ground or you are dead! I will shoot you! I will put a round in you, sir! Put that rifle on the ground!” another yells. “What the hell’s the matter with you?”

Police believe the men did this to make a point about the right to carry, WWJ reported.

“I find this behavior totally unacceptable and irresponsible. This is not a Second Amendment issue for me. We had members of the public in our lobby that fled in fear for their safety as these men entered our building,” Dearborn Police Chief Ronald Haddad said in a statement.

RELATED: President Obama’s critics just had a field day with his “Glock which had a lot of clips in it” remark

Both Baker and Vreeland were arrested. They are now free on $1,500 bond.

You people are awesome, you know that? Truly awesome. I’m deeply humbled.

I’m currently facing three misdemeanor charges, had $4k in property stolen, and am absolutely amazed that people are responding to the video this way. This stuff is passé and normal for us, to the point that the average PD in our area doesn’t respond to calls of men with rifles anymore, because of the efforts of myself and many activists here in SE Michigan to desensitize and externally retrain especially bad officers.

But remember, Brandon Vreeland has been my routine partner in our entrepreneurship of being professional Independent Police Auditors. He is facing his own set of currently three misdemeanor charges as well, along with his own collection of stolen property (including his car, impounded for evidence and already searched with a warrant).

The police would love for this to be the moment that they silenced us, and we all know that should be avoided. Liberty is too important, and I’ve come too far since my YouTube channel is the most popular on YouTube for this exact subject. However, legal costs for three charges times two people is not cheap. As well, unless we can clear our names and get an order from a judge for property return, we have no crucial equipment to do what we do. It’s not just guns, it’s mostly the literally dozen cameras Dearborn has in their possesion. The costs to continue will be immense.

I refuse to ask for money, but it is certainly needed. Brandon and I have retained the one and only counsel that truly understands the core concepts of personal liberty and open carry, Nicholas Somberg of Somberg Law, PLLC.

Since bitcoin is not money, nor is monero or litecoin or ethereum, I will gladly accept donations of cryptocurrency of any denomination.

But the fight goes on in any event. We’ve been doing this for a few years now, but I know my 24 year old ass is only just getting fucking started. The fight for true liberty is eternal, because perfect freedom and harmony is an asymptote, and you all and I have a lot of work to do.

Special thanks to someone who wishes to remain anonymous for posting the majority of our bonds from across the country.