From time to time, stories of parents finding something in their children’s assignments or classroom lessons that they don’t approve of will surface.

RELATED: Middle schoolers in an Ohio town have been given permission to skip this class lesson on one religion in particular

These complaints focus on anything from teachers giving students problems to solve with questionable content or lessons they see as unfair, unwarranted and otherwise.

Two mothers from Chatham, N.J. have gone public with concerns about what they called the “promotion” of Islam during class.

Nancy Gayer and Libby Hilsenrath took their complaint to the Chatham Board of Education.

According to TapINTO Chatham, Gayer said, “My sincere issue – according to policy 2270 – the board of education directs that no religious beliefs be promoted or disparaged. I’m asking the board meet with the policy committee and eliminate the teaching of Islam and all other religions.”

She and Hilsenrath both argued that the specificity in which the core tenets of Islam were explored was problematic without discussing other religious in the same way.

Hilsenrath said there was a cartoon video that discussed the five pillars of Islam.

“It even goes so far as even making a statement ‘There is no God except Allah,'” she said before the board. “This video also states that Allah is the maker of everything, the one true God, etc. The main character is the cartoon video is looking for converts.”

The moms joined Tucker Carlson on his show Monday night to say why the think the “World Cultures and Geography” lesson “crossed the line.”

RELATED: Marine banned from his kid’s school because he objected to Islam lessons worries he won’t see her graduate

“I think it crosses the line, [teaching] one religion and not others,” Hilsenrath said. “If you’re going to do that in a public school, would you also feel comfortable teaching the doctrines of Christianity, for example?”

“Would you be comfortable in a public school to say, ‘Jesus is the way, the truth and the life, and no one comes to God but through me?'” she asked.

Gayer would add that her son was pulled aside a year ago for including a Bible quote in a slideshow presentation and told he couldn’t  show something that “belongs in Sunday School.”

But Superintendent Dr. Michael LaSusa has responded to the complaint that the extent of lessons on Islam are in line with attention given to other religions:

The School District of the Chathams delivers a curriculum that meets and exceeds the New Jersey Student Learning Standards. Said standards include subject matter on all of the world’s major religions, including Christianity, Islam, Judaism, Hinduism, and other faiths. The school district’s curriculum reflects these standards and takes a balanced and thoughtful approach to how they are taught. The lessons on Islam that some of our parents have raised as an issue comprise approximately three days out of a 180-day school year. Further, in the scope of our full curriculum, content addressing Islam does not represent a disproportionate amount of time or resources. It receives a treatment similar to the other world religions, as outlined by New Jersey’s state standards. 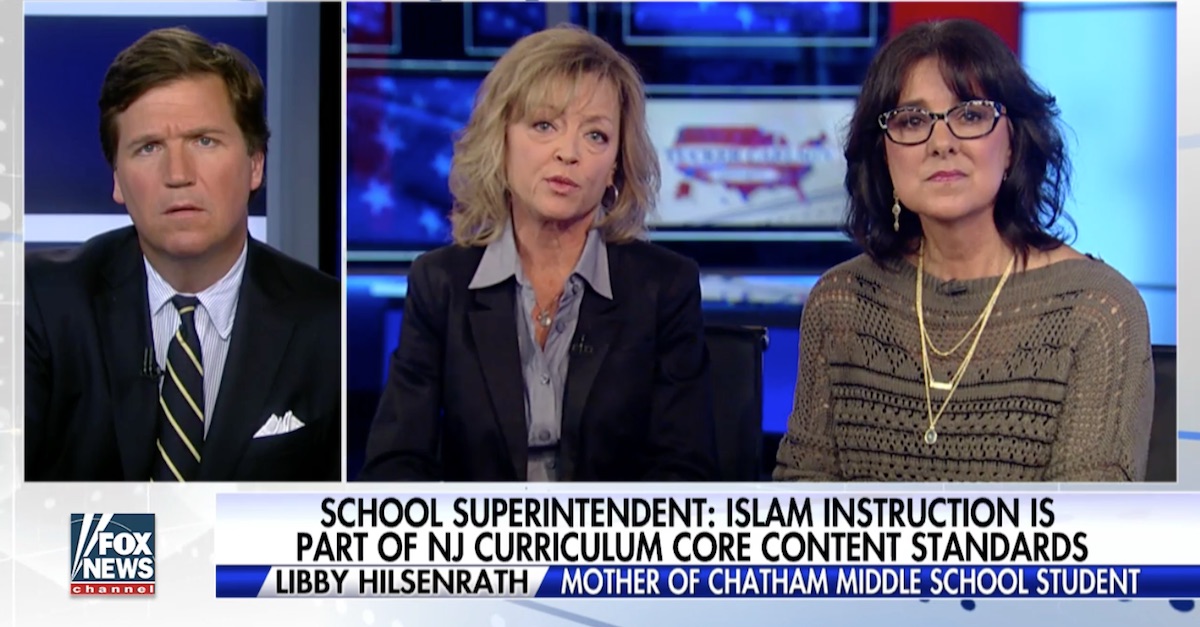