U.S. Firefighters Greeted With Applause as They Arrive to Fight Australia’s Wildfires 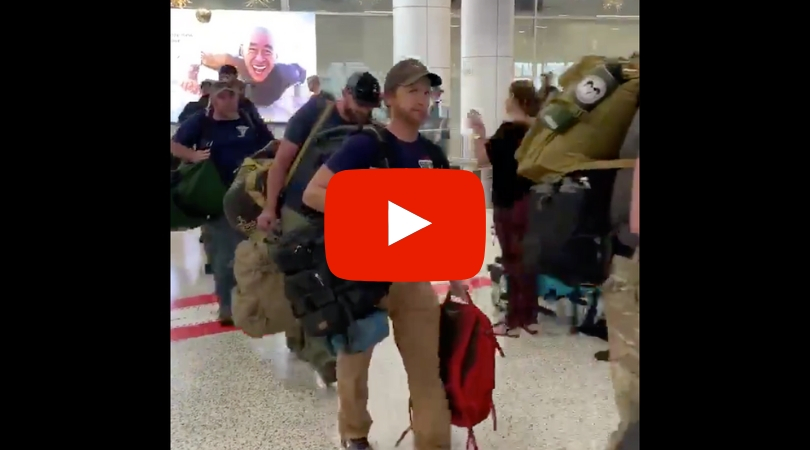 American firefighters were welcomed with applause and cheers at the Sydney International Airport as they arrived this week to help fight against the devastating fires currently active around Australia.

Shane Fitzsimmons, Commissioner of New South Wales Rural Fire Service, shared an emotional video on social media as soon as the firefighters arrived. He noted, “US firefighters arrived at Sydney Int Airport this week, on their way to assist with fire fighting in Victoria. Coming through, all gathered gave a spontaneous & lengthy round of applause, reflecting the gratitude & admiration we all have for their generosity.” The last time U.S. firefighters traveled to Australia was in 2010.

US fire fighters arrived at Sydney Int Airport this week, on their way to assist with fire fighting in Victoria.
Coming through, all gathered gave a spontaneous & lengthy round of applause, reflecting the gratitude & admiration we all have for their generosity. #NSWRFS @NSWRFS pic.twitter.com/5epg5y4qxX

The National Interagency Fire Center, which is the government agency that coordinated the U.S firefighters going to Australia, stated that roughly 100 firefighters were sent in December and early January with “50 to 60 more planned to be dispatched? later on this week.

Canada has also sent firefighters to Australia for the very first time. Australian authorities state that the wildfires will most likely leave more than 1 billion animals dead, will cause a loss of 30% of koalas’ habitat located in North-South Wales, and potentially affect a third of the animal population in that region.

Australian fires have been burning for months and have caused the death of 27 people and burned more than 7.3 million hectares across its six states. To put that in perspective, it is an area larger than the countries of Denmark and Belgium. This week, the Irwin family, who own the Australian Zoo Wildlife Hospital, reported they rescued 90,000 animals including those falling victim to the ongoing wildfire devastation.

Our @AustraliaZoo Wildlife Hospital takes in animals from all over Australia. Hundreds of grey-headed flying foxes, a species listed as vulnerable, have been flown to Queensland after the rescue centre they were recovering in was at risk from fire and evacuated. Some of the orphans are now being cared for by the team at the hospital until they’re big enough to go home, and there’s no threat of fire. 🦇 In September, flying fox admissions to the hospital skyrocketed by over 750% due to drought conditions and lack of food. Flying foxes are now being drastically affected by wildfires and we’re again seeing an influx of these beautiful animals from across the country. This week, we treated our 90,000th patient. To cope with so many animals being admitted to the hospital, in 2019 we opened a sea turtle rehabilitation centre, sea snake ward and are about to complete a new bird recovery area, but it’s still not enough to keep up. We need to build a new ward for our patients. Wildlife Warriors from around the world are asking how they can help us save native wildlife, you can donate on our website www.wildlifewarriors.org , or support our fundraiser to start construction of our newest ward by visiting the link in my bio! 💚

Through an Instagram post, Bindi Irwin stated, “Hospital takes in animals from all over Australia. Hundreds of grey-headed flying foxes, a species listed as vulnerable, have been flown to Queensland after the rescue center they were recovering in was at risk from fire and evacuated.?

In many ways, US firefighters are returning the favor to Australia. According to the U.S. Forest Service, Australia has been sending several firefighters to the United States for more than 15 years now, the most recent example was back in August 2018 when 138 Australian firefighters arrived.