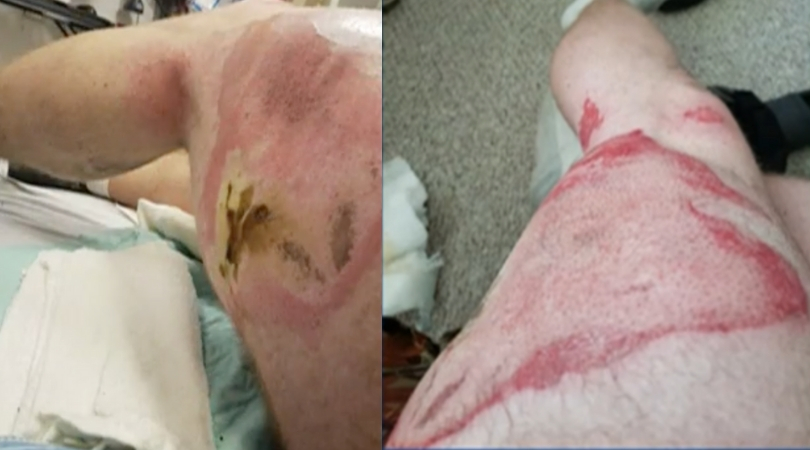 A man suffered blistering burns after batteries from his vaping device exploded inside his pocket. According to Tyler Newton, he put three lithium batteries inside his vape pen and one extra in his pocket. The batteries blew up a few minutes later. Newton was driving his Jeep home from work, when the vehicle filled with smoke, causing him to swerve his way through the road, trying to put out the fire and getting out of his vehicle. Luckily, Newtown was in the middle of a construction zone where everything was being paved, and there was no traffic.

Trying to get rid of an unhealthy habit, the Massachusetts man decided to pick up vaping, thinking it was the safer alternative to help him quit nicotine. Yet, the electronic cigarette left him permanent scars, spending four hours in the hospital. Newton suffered first and second-degree burns and some acid burns from the battery.

One of the three Samsung lithium batteries melted onto the floor map of the Jeep. Due to his injuries, Newton stated he is out of work and is recovering at home, but has given up on vaping and is back to smoking, after it “seems to be the better alternative at the moment.”

This isn’t the first incident related to a vape exploding. According to the US Fire Administration, between 2009 and 2016, there were 195 fire or explosions triggered by the e-cigarette. 62 percent of the incidents of explosions and fire involving an electronic cigarette or batter occurs when the device is either actively in use or inside a pocket. Back in May, a Florida man was killed and burned by an exploding vape pen.

38-year-old Tallmadge D’Elia was smoking the electronic cigarette on his bed when it blasted apart on him. He was found inside his burning Florida home by Tampa Bay Firefighters. Medical examiners stated the explosions expelled two pieces of the vape pen into his skull, listing his death as “projectile wound of the head” suffering burns on 80 percent of his body.

According to authorities, usually, these explosions occur due to the devices’ batteries, the quality of your device component and lack of knowledge as to how to maintain your equipment. Most vapes are powered by a lithium-ion battery, which can pose a fire hazard if left in pressurized areas and are known to catch fire when overheated. Experts stated that as long as lithium-ion batteries continue to be used in e-cigarettes, severe injuries will continue to occur and explosions and fires will continue to increase.

The US Food and Drug Administration suggest vape managers change their package labels to “include graphics or texts to show users how to recharge the product to minimize the risk of any battery failure.” One should also buy quality vape pens from a reputable manager, and check the parts to make sure they don’t feel used or cheap. Users should not leave the device charging overnight, to avoid an electrical power malfunction resulting in a higher risk of explosion or fire.