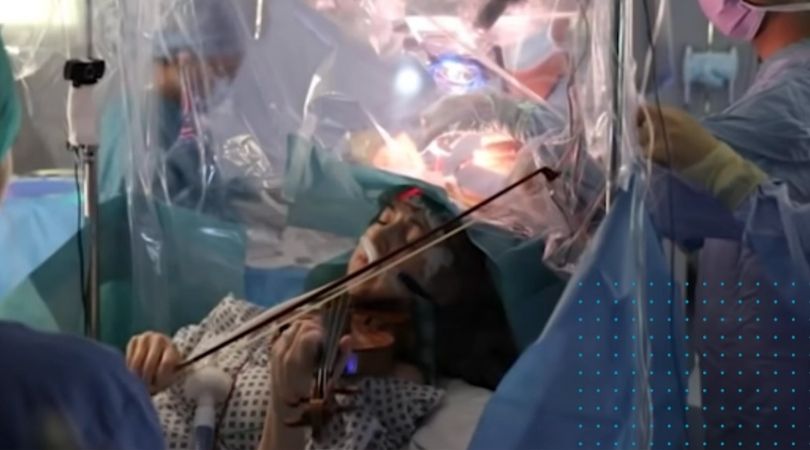 Wow, talk about impressive! A 53-year-old German woman who recently underwent brain surgery is going viral for the most remarkable reason! Dagmar Turner was diagnosed with a brain tumor back in 2013, but her tumor was benign, meaning it couldn’t be operated at the time.

After suffering a seizure, Turner found out the tumor had grown and became aggressive. So, keeping her 13-year-old in mind, she decided it was finally time to undergo surgery to remove a tumor in the right frontal lobe on her brain. After more than 40 years of training, and becoming a violinist with the Isle of Wight Symphony Orchestra, Turner was worried that the surgery would heavily affect her dexterity and prevent her from playing again.

Which is why she consulted with Professor Keyoumars Ashkan at King’s College Hospital located in London, England, who noted she shared a passion for music as well and is an accomplished pianist. The neurosurgeon then had the brilliant idea to let the violinist play during surgery to make sure it wouldn’t affect her playing.

Yes, DURING surgery. So, there she was with her skull open, in the process of getting the tumor removed, and nonchalantly playing the violin. Now THAT is impressive. Why did they want her to play the violin mid-procedure? Well, the tumor was situated so close to the area of the brain that controls movement in the left hand, meaning it would have been easy to damage with one small move in the wrong direction. But, if she was playing the violin while surgery, it would allow doctors to monitor which areas of the brain were still active, and avoid them more easily.

So, surgeons decided to put Turner under anesthetic and then performed what is called a craniotomy, an opening in the skull. When she was conscious again, they gave her a violin and then continued to play through the surgery. Turner stated she played George Gershwin’s aria Summertime while doctors continued the operation. She noted, “It was like being woken up from a really deep sleep. The first thing I really remembered was when they put this violin in my face, like, ‘now play, Dagmar, play’. I was like, ‘let me sleep’.”

This video is extraordinary

Luckily, the surgery was a success and after 3 days of recovery, she was discharged from the hospital. Doctors were able to remove over 90 percent of the tumor, including all the areas suspected of aggressive activity while retaining full function in her left hand.