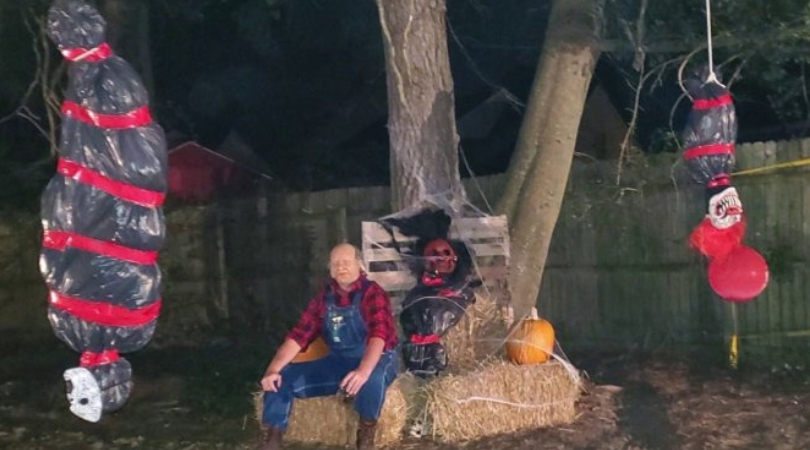 A woman from Chesapeake, Virginia alerted authorities to her neighbors Halloween decorations, which she felt were racially insensitive, evoking the practice of lynching. Lori Brunson saw figures wrapped in black trash bags hanging from a tree in his backyard.

Brunson stated she initially saw something swinging from a tree, and when she got closer saw it was a replica of a body being hung by a tree limb with a noose around its neck. The neighbor was not named by authorities, but he did state that he meant no offense with the decorations, and “the heads were down for a reason. No noose tied, just square knots on the bag, heads down, feet up like monsters.”

He also stated that the effigies were pointed downwards since he knew it was a predominantly black neighborhood and didn’t want anyone thinking he was trying to be racist. Unfortunately, this isn’t the first time Halloween decorations cause controversy due to decorations showing victims of hanging.

According to Newsweek, in New Jersey, police were called about a Halloween display that featured “dark-complexioned figures, hands tied behind its back, on a gallows.” A noose had allegedly been placed around the figure’s neck. State police in Salem County told Ryan McDonald in September that the racist display in the front yard was frightening and offending some people.

Mcdonald responded by saying, “My whole intention was to make things fun for Halloween. It was never anything due to race. After the fact, it made me feel bad. It made me remorseful that people felt that way.” President of the Salem County National Association for the Advancement of Colored People, Nelson Carey, stated the whole incident was a hate crime and expected people to know better. McDonald’s has since taken down the racist display.

In Emerson Heights, Indiana, Shane Fischer was quickly evicted from his own home after protesters objected to the hanging display he had put up, which protestors associated the Halloween display with lynching. In a statement, Fischer’s landlord, Alex Tachtiris, stated Fishers had put the Halloween display in front of the home more than once through the years. He noted, “The fact that they would try this again is completely disgraceful and I am notifying them now to not only take the display down immediately but that I am giving them official notice of termination of their lease.”

This article was originally published on October 9, 2019.