That’s the real story here, though it stands to reason that the selective outrage over Walmart selling an “Impeach 45” t-shirt is mildly interesting as well. As interesting as run-of-the-mill, momentary, disingenuous, armchair outrage can be, anyway.

Apparently, many people were surprised — furious!!! — to learn that an impossibly giant store that sells an unfathomable amount of random shit happened to sell a thing, amidst the literally tens of millions of other things they sell, that those people did not particularly care for.

Long story short, people got mad because Walmart is selling these shirts: 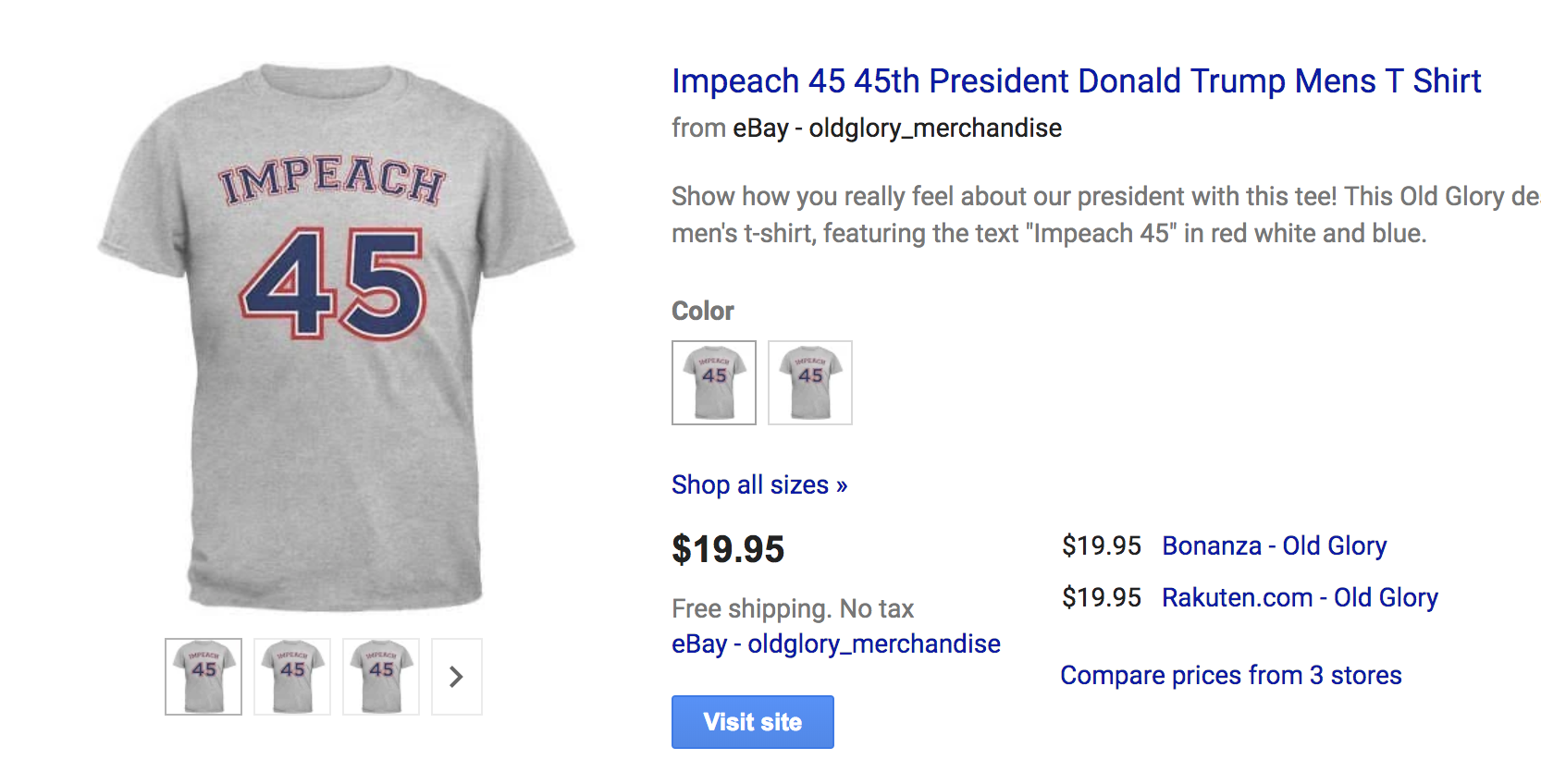 Caring about this in any sort of meaningful way would likely imply that one does not have a lot else going on in their lives. It’s a shirt. A shirt that doesn’t call for violence, a shirt that isn’t trashy to wear around kids, and a shirt that definitely has equivalents on the opposite side of the idealogical spectrum that are roughly as meaningful and effective at converting people politically.

I AM UPSET & ANGRY! A longtime Walmart shopper, today I quit over the sale of Old Glory Impeach 45 shirts. This offends me & many others. As a huge PRO American company, It is WRONG to politicize & be anti-US President with any product. Clean up your act #WALMART!! pic.twitter.com/u7hiAUHPGo

.@walmart why are you selling Impeach 45 baby clothes on your website?????

What kind of message are you trying to send? https://t.co/PwI4nCVAZx

What’s really more troubling for Walmart to promote in your eyes, heartland parent worried about the future of our country who, because of that anxiety, voted for the man, Donald Trump, who you thought was the best hope to keep the United States on course? A t-shirt that promotes the (extremely unlikely) scenario of impeaching that man through, presumably, legal and democratic avenues? Or a bumper sticker promoting the normalization of public declarations about which genitals one prefers to pleasure?

I don’t see any “I <3 Dick” boycotts going down. (For what it’s worth I have a problem with neither of these items. The bumper sticker that said, “Baby Muggle on Board” deeply offended all of my sensibilities, however.)

Easily the funniest part about all of this is that anyone thinks the monstrous corporation that is Walmart cares about any of them. Democrat, Republican, whatever. We’re cash cattle to them, guys. Relax.

If that’s the funniest part of this, the most exhausting is watching liberals shout, “Herr derr, guess u conservatives don’t like free speech after all!” as if the outrage cycle isn’t a do-si-do of hypocrisy so perfectly balanced that it would get Thanos hard.

Just a heads up…
If you've said:
"EVERYBODY ON THE LEFT ARE EASILY TRIGGERED SNOWFLAKES!!!!"

You look like a total hypocrite if you also say:
"I'm going to #BoycottWalmart because they had an "Impeach 45" t-shirt on their website!!!!"

(Walmart has since removed the shirts from its online stores.)